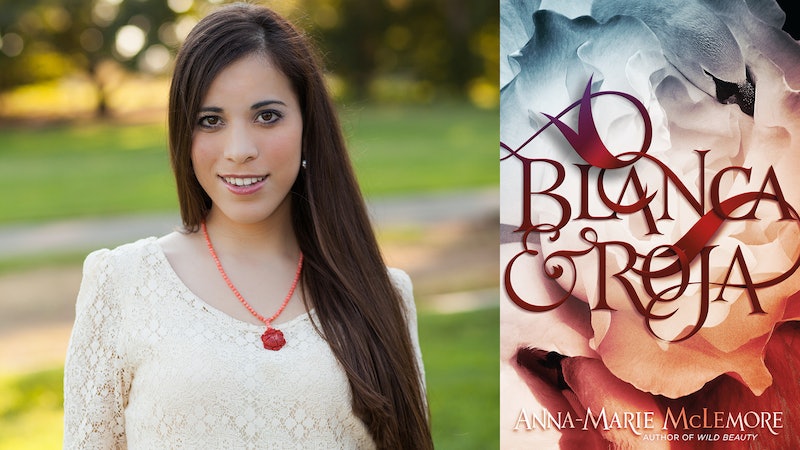 Photo of Anna-Marie McLemore, courtesy of the author
By Sadie Trombetta
May 6, 2019

To say I am a fan of fairy tales would be an extreme understatement. I love fairy tales, adore fairy tales, I seek out fairy tales wherever I can find them and in whatever form I can find them in. Classic German fairy tales by the Brothers Grimm? Count me in. Light-hearted animated musical adaptations? I am so there. Campy television anthology series? Sign me up. Twisty modern retellings from Angela Carter, Daniel Ortberg, and Kelly Link? Of these, I will never get enough, because when it comes to fairy tales, there is no better way to tell them than by, well, retelling them. Just ask Anna-Marie McLemore, whose latest young adult novel Blanca & Roja reimagines a centuries-old tale for the modern age.

Blanca & Roja is a bewitching Latinx retelling of Swan Lake, the wildly popular fairy tale ballet composed by Pyotr Ilyich Tchaikovsky in the 19th century and performed on stages all over the world a countless number times since. Originally written as a tragic love story, Swan Lake becomes a poignant tale of sisterhood in McLemore's hands and an exploration of sibling rivalry, the idea of fate, and the power of love.

A darkly magical novel, Blanca & Roja is just one of the latest retellings to prove that there are still plenty of stories that aren't only worthy of retelling, but in need of retelling. McLemore told Bustle why that is, what other classic story she would like to rewrite, and more.

Bustle: What drew you to Swan Lake and inspired you to write a retelling of it?

Anna-Marie McLemore: The contrast of Odette and Odile, and the fact that the same dancer usually dances the two roles, both resonated with and unsettled me as a young woman of color. Women, and especially women of color, are so often given the message that these are our only options in the world, one sweet and innocent, one seductive and deceptive. But I think I always saw strength in Odette and vulnerability in Odile, the same way I imagined Blanca finding her fearlessness, and Roja being given space to find her gentleness.

AM: Placing two Latina sisters, one of them queer, at the heart of Blanca & Roja gave this story space to look at colorism, beauty standards, and expectations of women. This is a story about sisters, and swans, and an enchanted forest full of dangerous magic, and it’s also a fairy tale about racism, queerphobia, transphobia, ableism, things that are there in fairy tales, even if they go unacknowledged.

"Retellings are the chance to rediscover the most beautiful parts of a story and question its flawed assumptions."

What do you think retellings and reimaginings of classic stories have to offer readers who know and love the originals? What can we learn by reading new versions of old stories?

AM: Retellings are the chance to rediscover the most beautiful parts of a story and question its flawed assumptions. Swan Lake is a deeply moving love story, but if its messages about womanhood go unquestioned, they reinforce the idea that we can be reduced down to basic types. Before I could write Blanca & Roja, before I could reimagine “Snow-White & Rose-Red” and Swan Lake as a queer Latina writer, I had to acknowledge not only what I loved about the originals, but also how they broke my heart a little.

"Stories that get retold are often ones that have universal themes at their core..."

AM: Stories that get retold are often ones that have universal themes at their core, like the sisterhood in “Snow-White & Rose-Red,” or the duality imposed on women in Swan Lake. Whether a retelling reinforces what the original says, or, like mine more often do, defies it, those themes speak to us.

AM: I’m so happy you asked this, because I’m just starting to share a little about my next book! Dark and Deepest Red, out in Jan. 2020, will be a reimagining of The Red Shoes inspired by true historical events. I’ve wanted to take on this Hans Christian Andersen tale for a while, both because it’s beautiful and frightening, and because I wanted to push back against what it tells girls about our bodies and hearts. I loved getting to create a retelling that’s part magical realism, part historical fiction, all about brown girls, and very, very queer.

You can read an excerpt from Dark and Deepest Red on Bustle now.