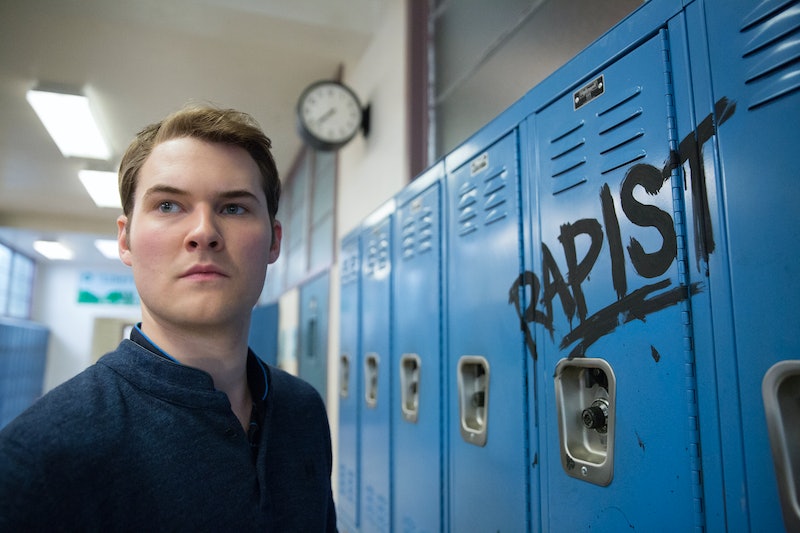 Spoilers for 13 Reasons Why Season 2 ahead. He may be the villain on 13 Reasons Why Season 2, but Bryce Walker also might remind you of someone you know — and that's the point. "One of the main goals was to make him as realistic as possible," Justin Prentice tells Bustle. "It’s very important that people don’t discount what he's doing. They need to detect the Bryces in their own lives."

Last season, it was revealed through Hannah's tapes that Bryce had sexually assaulted her and Jessica, who spends this season coping with the aftermath of her assault. But Season 2 also spends time looking at Bryce, who, despite being the villain of the season, "isn’t this character that’s intentionally harming people just for the sheer pleasure of it," according to Prentice.

Like everyone else on the show, Bryce has a backstory, and it's one that includes absentee parents, a dad who shows little respect for women, and access to plenty of money, which, combined with his top athlete status, puts him in a position of power. "Bryce just assumes what he thinks is right and he can take whatever he wants to because people are lucky to be around him," Prentice says. "And that’s a dangerous way of thinking."

It's not just high school boys on the baseball team who think this way, though. As we've discovered through the #MeToo movement, this problematic way of thinking extends to people in all kinds of positions of privilege and power, who, as Prentice points out, have "this tendency to think that they could do whatever they want and act however they want without consequences." He adds, "I think it’s important to start chipping away at that."

13 Reasons Why does this by showing there are consequences to his actions: Bryce is put on trial assaulting Jessica. But for many, the punishment probably won't feel like it fits the crime. Watching this season, it's hard not to see the similarities between Bryce's case and that of convicted Stanford sex offender Brock Turner, who was sentenced to six months in jail in 2016 for sexually assaulting a young woman behind a dumpster. Ultimately, he only served three months of that sentence.

The judge cited the “severe impact” the sentence would have on Turner, a first time offender, as the reason he wasn't given more time. During the sentencing, the victim, known as "Jane Doe," read a powerful letter explaining how the assault impacted her, leading many to lament that the severe impact the assault had on her life wasn't equally taken into consideration. Echoing the sentiment of the Turner case, Bryce is given only three months probation because the judge doesn't want to "do any more damage" to the promising young man, therefore overlooking the damage the assault had done to Jessica.

"Bryce is a privileged white male who’s great at sports and [is] based on the standard that society has sort of set [that] he gets off scot-free. It sucks and it’s going to anger a lot of people," Prentice says of Bryce's sentencing. "But they should be angered. That’s one of the faults in society at this current moment in time, and people are right to be angry." Especially since out of a thousand reported rapes, 994 perpetrators will walk free, according to RAINN.

Prentice is one of those people who got angry. In researching his role, he realized that the Brock Turners and the Bryces are the norm, not "isolated incidents" as he had once assumed. According to RAINN, 11.2 percent of all undergraduate and graduate students ages 18 to 24 experience rape or sexual assault through physical force, violence, or incapacitation.

When it comes to sexual assault, the topic is usually predominantly a talking point on college campuses, but according to RAINN, women of the same age who are not enrolled in college are four times more likely to experience sexual violence. And high school aged females (16-19) are four times more likely than the general population to be victims of rape, attempted rape, or sexual assault.

"I think Bryce kind of shows the realism of these issues," Prentice says. "I think it shows the different facets of rape and rape culture. It’s not always in a back alley — the majority of [rapists] are someone you know. These are people you’ve let into your trust circle, people who are already in your lives." Of sexual abuse cases reported to law enforcement, 93 percent of juvenile victims knew the perpetrator, according to RAINN.

It's easy to hate Bryce — Vulture said Prentice is a "spectacular asshole," a compliment, of course — but the actor thinks it's important to pay attention to his downfall. "While Bryce didn’t go to jail, you do start to see his empire crumble, so there’s a little bit of justice in that regard," he says. Bryce's friends begin to stand up to him and understand that standing up for what is right is more important than supporting a friend. "It might not be the justice viewers were hoping for," Prentice adds, "but I think it’s a realistic justice." Sadly, it's also often the most survivors and their supporters can expect in cases like this, even if it feels like the least.

Prentice says he doesn't know if Bryce will change after his sentencing — he also doesn't know if there will be a third season of 13 Reasons Why, and if there is, whether or not his character will be back — but he does believe guys like Bryce can. But that's only if people are brave enough to speak up and detect the similarities between Bryce and those they know in their own lives.

"The first step is always the hardest and as a society we’re moving towards that direction," Prentice says of being able to talk openly with our friends, family, and colleagues about sexual assault and consent and how those two go hand-in-hand. "It can be as simple as reading your partner’s body language and listening to their words," he says. "If they say no, it’s a no." And Prentice will continue saying this until the Bryces of the world start to fade away, so that the Jessicas can get real justice.

More like this
Where Is Lionel Dahmer Today? Jeffrey Dahmer’s Father Reflected On The Serial Killer’s Death In 2020
By Brad Witter
Here's What Jeffrey Dahmer's Dad Has Said About His Other Son, David
By Grace Wehniainen
Glenda Cleveland Died 2 Decades After Trying To Turn In Neighbor Jeffrey Dahmer
By Brad Witter
Caleb McLaughlin Details Racism From 'Stranger Things' Fans
By Radhika Menon
Get Even More From Bustle — Sign Up For The Newsletter