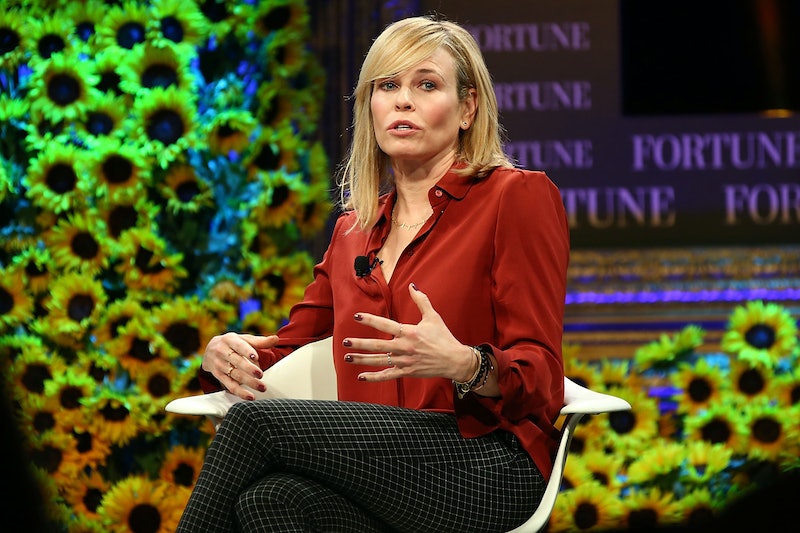 Being around Hollywood's elite is just another day in the life of Chelsea Handler. Season 1 of her Netflix show Chelsea just wrapped, with stars like Gwen Stefani, Jennifer Lawrence, Drew Barrymore, and Charlize Theron just being a handful among the super A-list roster of interviewees. Since her Chelsea Lately days on E!, celebrities have been drawn to the host because of her honesty and uncensored realness. And although she's had huge celebrities at her fingertips, there's no denying an interview with Donald Trump would bring in massive numbers. Still, Handler gave that notion a hard no. Even though she's been incredibly vocal about the president-elect, the opportunity to face him in person and tell him the-hell off still doesn't seem enticing enough for the star. Call it taking the high road or being plain disgusted, but it seems no amount of viewers could change her mind.

While consistently calling out Trump in the series, Handler did take a break from the comedy to educate others on the election. She helped register 17,000 voters and featured guests like Chelsea Clinton and California Sen. Barbara Boxer, Van Jones, and Jake Tapper. She even cried on air the day after the election. "I’m not going to be funny... when I was horrified and crying all night," she told Variety. She revealed feeling it was "so unprofessional," but again, so is her "whole life."

Handler admitted the media is to blame for making Trump a larger-than-life figure, and even pointed fingers at the Kardashians for the bizarre nature of what hits in American pop culture. "They were treating him as an entertainer first... We’ve turned into a reality show," she said. "I blame the Kardashians... The way these people have blown up and don’t go away — it’s surreal. Everyone is for sale."

Aware of the insane hype around such figures, particularly Trump, Handler still didn't even second guess bringing him onto her show when asked if she would. "Why would I? I don’t ever want to see him," she said. "I don’t ever want to interact with him, which won’t be a problem."

She's stuck to her guns before. "Once he came up to me in a restaurant in L.A. to introduce himself — to tell me he’s Donald Trump. I said, 'Great,'" the host said. She's jabbed at his restaurant, saying, "It’s the biggest piece of garbage you’ve ever walked into" as well as his family, with, "They’re scared sh*tless of him, and the fact that they’re still around him means they have never stood up to him."

But at the end of the day, she was clear about her role as an influential voice in media. "First and foremost, I’m a comedian," she said. "And we have to make fun of him, just like you’d make fun of anybody who was president." Additionally, she recognized that Trump voters can watch and even appreciate her show. "As long as you’re not racist or a bigot, we can find common ground," she said.

Handler recognized that she can have her opinion and freely express it, but it doesn't mean she needs to curse Trump's out face-to-face to do it. Handler's gumption hasn't gone unrecognized. "It's awesome to be on a show that's run by a strong woman," said guest Christina Aguilera.

Handler made it clear she'll continue carrying on her way — without Trump and with sarcasm, tears, and whatever else she sees fit.

More like this
Christina Aguilera Took A Powerful Stand At Brighton Pride
By Sam Ramsden
Are John Legend & Kanye West Still Friends? The Singer’s Latest Update Is Candid
By Brad Witter
Beyoncé & Madonna’s “Break My Soul” Remix Honors A Group Of Black Icons
By Stephanie Topacio Long
'Scream’s Courteney Cox Has Broken A Major Horror Record
By Sophie McEvoy
Get Even More From Bustle — Sign Up For The Newsletter