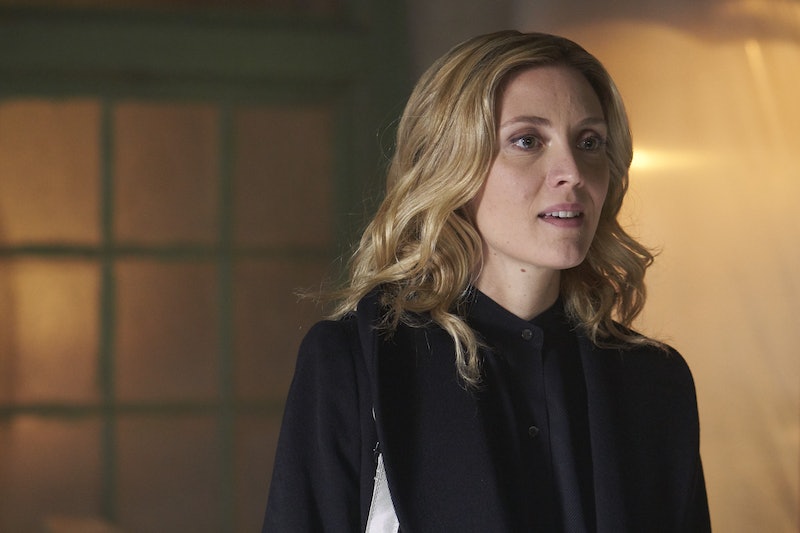 As it inches terrifyingly closer to its fifth and final season finale, Orphan Black is upping the stakes. Neolution is coming apart at the seams; the clones are desperate to free themselves from their creators/controllers once and for all; and there's one person at the center of it all who just may save the day: Delphine Cormier, played by Evelyne Brochu. Over the past five seasons, Delphine has gone to the ends of the earth — sometimes literally — in order to protect her lover, Cosima, and to fulfill the promise she made to love each of the sisters equally. Enacting this has required many secrets and some pretty shady behavior, but to ignore the fact that Delphine is the unsung hero of the show would be a big mistake.

The scientist's motivations may seem questionable at best, but as Brochu reveals in an interview with Bustle, there's a rhyme and reason to her actions, and Delphine is nothing if not dedicated to her end game.

"She's doing the devil's dance even though there's a purpose, there's a part of her that's crushed by the fact that she has to swallow so much to play along. What empowers her isn't the playing along, it's her goals," Brochu explains. "I think one of the cool things about Delphine is that she doesn't mind not being liked. She's fighting for people who are still doubting her because of a first impression she made years ago. People who can keep going forward without caring what anyone else thinks is something that I truly admire."

She continues: "For Delphine, the goal is above the everyday feelings. I think she's very strong because she’s fighting for a love that you only find once in a lifetime. She's tapping into that for strength and that drives her forward."

Fans first met Delphine back in Season 1, when she was posing as a fellow university student who befriended Cosima while secretly serving as her monitor for Dyad. While her allegiance to Cosima took priority when they fell in love, Delphine is still struggling to be trusted by the sisters despite all the work she’s done over the years to protect them. Sarah in particular has been skeptical of her motivations, which Brochu thinks makes sense given Sarah’s past experiences.

"I guess Sarah does what we all do sometimes, which is judge someone by her first impression. I think Sarah's intuitive — she knows that Delphine is hiding stuff. She knows when Delphine was introduced to the sisters, she said she was something and turned out to be something else, which is already a betrayal. Sarah is very street smart and so Delphine rings a bell of danger for her." And Delphine's secretive nature is to blame for this wariness as well.

"You can redeem yourself, but even with Cosima, Delphine is holding back and keeping her cards close to her chest," she admits. "I think — and I think the audience thinks — she's doing that to protect Cosima, but if you're one of the sisters, you might wonder, why is that? Is she this person who lies that I met back in Season 1? It’s difficult for Delphine to deal with, but she has true love to keep her going."

Speaking of true love, it’s Delphine’s relationship with Cosima which serves as the impetus for pretty much every action she takes. While many of those actions take place off-screen, it’s clear from their brief and recently infrequent reunions that she’s doing whatever she can to fulfill her promise of protecting Cosima and her sisters by utilizing her position within the group of Neolution power players to learn whatever she can to advance their cause. It’s this perceived adherence to the movement’s principles that might make some doubt Delphine’s intentions, but Brochu assures fans that she won’t allow anything to distract her from her true goals.

"[Neolution] science affects the love her life, so she can't just walk away from it,” Brochu says. "That's where her allegiance lies—with Cosima. She's fascinated by and curious about the idea that we could live forever and cure everything, but the big issue for her is Cosima's life, not, 'Ooh, look at this cool science!'"

"There’s also the fact that the ‘crazy science’ is something that connects her to Cosima intellectually and they play off that," she explains. "There's a moment in Episode 5 where they find the LIN28A gene and discovering that together is a very exciting moment, but then it’s like, 'Oh God, what do we have on our hands?' It’s really complicated, but for Delphine, it’s also simple—she loves Cosima and she's going to protect her."

The complex nature of Delphine and Cosima’s relationship is intensified tenfold by the danger they perpetually find themselves in, most recently being stuck on Neolution’s secret island and attempting to uncover P.T. Westmorland’s real agenda and identity — a discovery which served as a catalyst for the upcoming series climax. Ensuring Cosima and the sisters’ safety is paramount for Delphine, but it’s not lost on the scientist that she’s maintaining a delicate balance that could suddenly dip in an unfavorable direction.

The future for Delphine and for the clones is still far from certain, but Brochu remains positive that a happy ending is still possible for Delphine and Cosima and insists that Delphine won’t back down on the promise she made years ago to all of the Leda clones, even if they do find victory in the end.

"Cosima and the sisters are going to be Delphine’s priority for a long time. She's a focused person and a science geek. She's still in step one of her plans to protect them but she's goal oriented too and I do think that whatever future there might be for Cosima and her, she’s aiming to ensure they have one,” Brochu teases. “I don't want to reveal too much, but I will say that when Delphine tells Cosima to act like they've split up in Episode 5, they’re actually closer than before. I think that was a powerful line. It encompasses what they're all about."

If all of this comes to a not-tragic end, Brochu has some ideas about where Delphine might want her life to go.

“Back in Season 1, when she first got with Cosima, they were both a little grungy,” Brochu reminisces. “That's sometimes something I think Delphine misses — the time before when they were just two chicks in university who loved science. I think she's hoping to find a place where they can maybe listen to a little Ani DiFranco and get high and just be girlfriends in love. She definitely misses that."