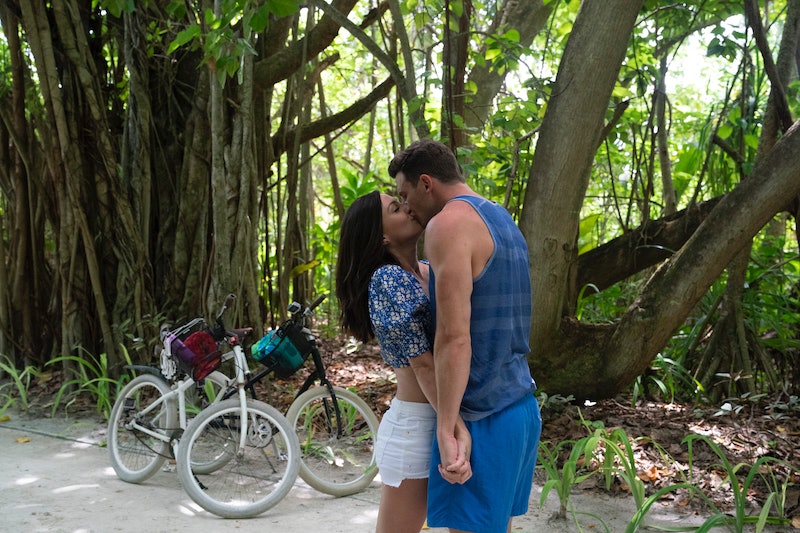 It was a long, romantic road for Blake on The Bachelorette, and especially after he became one of the final two, he had plenty of people rooting for him. He and Becca got along great and had tons of fun, he allowed her to know super intimate and sometimes traumatic details about his past, and from what viewers have been able to see, he's a pretty great guy. Unfortunately, it just didn't seem to be enough — so why did Blake and Becca break up on The Bachelorette?

During the show's season finale, it became clearer than ever that Becca was having a hard time choosing between the two men, and Blake's anxiety over the situation was not getting any better. But the final date the two shared seemed to go so well — she said their connection was strong, told the camera she was in love with him, and that he was the perfect partner, and he even made her an adorable box of memories from their time together.

Ultimately, though, Becca said she was "going with the one she couldn't see herself without" — a line she repeated several times throughout the finale — and told the camera that she's found what she always wanted. Apparently, that just wasn't Blake. When he finally approached her for the final moments, he delivered an impassioned speech.

"Becca, you constantly inspire me to be a better man. I love the man I am when I’m around you. You’re the most sincere, honest, compassionate, goofy, funny, intelligent, truly genuine, beautiful person, inside and out, that I’ve ever met. I’ve been waiting for this day and this moment for quite some time now. From the first moment I saw you on the stage, I knew you were something special. From the first time you swung that sledgehammer and cracked those windows, I knew you were unlike any woman I’ve ever met. In Vegas, when you melted into my arms, when you smiled like that… I wanna make you smile like that for the rest of my life. When all of this is gone, it’s just going to be you and me, babe. That’s the way I want it. You are that right person. Becca, will you let me spend the rest of your life making you smile?"

Becca hesitated, which immediately hinted that things were not going to go Blake's way. "You've made me know that I can fall in love again. But through all of that too, because we were so constant, I think I was overlooking other relationships," Becca said. "Because we were so solid I wasn't seeing everything. There's just one piece with somebody else that I'm not ready to say goodbye to yet." He was in tears almost immediately, and so was Becca. "I don't want him to think he did anything wrong, because he didn't," Becca said tearfully to the camera.

Fans of the show have been concerned for Blake all season — many of them thought that he was falling harder for Becca than many people in the franchise ever do for the Bachelor or Bachelorette, and that if it ended, it could be an emotional breakup. After the breakup happened, people on Twitter were also devastated.

"He just seems so in love with her and they're great together," Reddit user followingfreeways wrote about Blake ahead of the finale. "Not only will I be sad but I don't want to see how sad he might be if he loses." Especially as he got further and further in the season, Blake was constantly shown agonizing over the fact that Becca was spending time with the other guys in the mansion, and struggling to come to terms with the idea that she might feel just as strongly for them as she does for him.

Of course, contestants quite literally sign up for that kind of situation when they agree to be on the show — it's kind of the whole point. But Blake seemed genuine in his feelings, and like even he was a little caught off guard by how intensely he felt.

Viewers have defended Blake against criticism that he's seemed too emotional and anxious throughout the process. "Blake is reacting like any normal person would in the same situation, and at least he’s being up front about it," wrote melanieg51 in another Reddit thread that speculated about how much producer manipulation was causing him to stress out. "I can’t imagine how it would feel to be in love with someone knowing they most likely have feelings for another. Not everyone can compartmentalise their emotions."

Blake appeared shortly after the breakup aired, live onstage with host Chris Harrison. He said he'll always have love for Becca, even after the heartbreak. "I want her to know that there's no real hard feelings there. She did what she felt she had to do in that moment for her happiness, and I'll never be angry at her for that," he said.

Even when Becca joined him live onstage, she said he did nothing wrong — there was just something about Garrett that made her feel like he was the right choice. He also reiterated that there were no hard feelings, and he knows she was just doing what was right for her. And, he added that he's not going to "apologize for how hard he loves," nor is he going to be more afraid of loving someone else in the future. Regardless of how emotional he was throughout the process, Blake carried himself respectfully and lovingly throughout unimaginable circumstances, and it's clear how much he still values Becca as a person.

Blake might not have been Becca's final choice, but in a season full of scandal and disappointment — including some surrounding Garrett, the one Becca did choose in the end — he stood out to viewers as a sensitive, friendly, well-meaning, honest person, and one who deserves nothing but good luck in love from here on out.