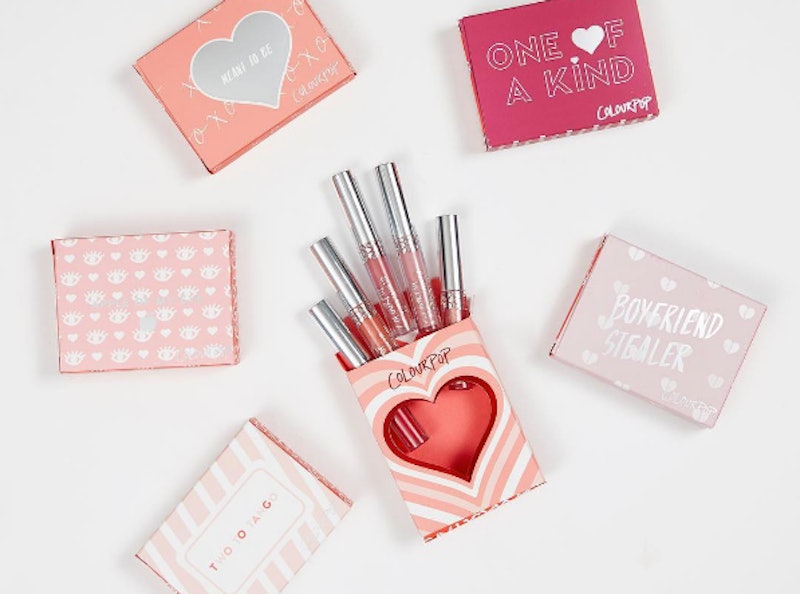 ColourPop Cosmetics is always switching things up when it comes to launches, but this time is their biggest yet. Although they told their fans that the Valentine's Day Collection would arrive on Feb. 7, they surprise everyone by releasing it a day early. Why did ColourPop launch their V-Day Collection early, you ask? Let's just say that they take their fan feedback very seriously.

If you're not following ColourPopCo on Snapchat yet, you should probably get on that. The brand surprised their followers by launching their Valentine's Day Collection almost an entire day early. The only announcement that they made was on the social media outlet. The news hit Snapchat around 10:30 p.m. ET, and it didn't take long for items to start selling out.

This isn't the first time that the company has had a surprise launch, but it is the first time that they moves the date up by half a day. According to Snapchat, ColourPop saw that fans wanted the Valentine's Day Collection early, so that's exactly what they did. The story said that the company worked extra hard that day to stock the products early. Moral of the story: ask and you shall receive, my friends.

If you're a little late to the makeup game, let me break down why people are so excited about the launch. Not only are there brand new lippies and eyeshadow quads, but there's also never before created products as well. For the first time ever, you can get a duo of pressed shadows in a mini palette. There's also a brand new marbled highlighter called Tough Love available as well.

It's pretty incredible that a brand would listen to their fans this way. Normally when a brand sets their launch date, it's set in stone. Here are a few of the tweets that show just how excited people were about the launch. These are the people to thank for the early release.

Oh, they showed it.

The excessiveness has paid off.

So many mixed emotions.

You can't just spring a launch on beauty fans!

Shop while you can.

Basically, you should stop what you're doing right now and go shop before it's too late.