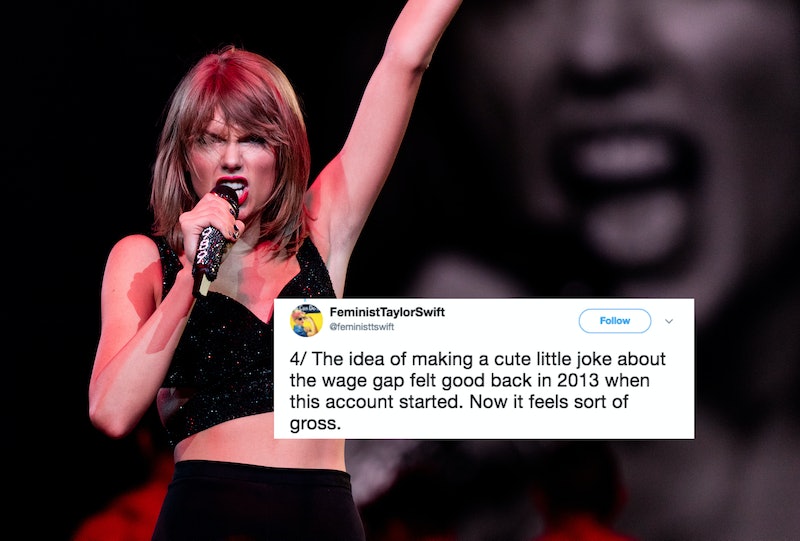 In the past, asking Taylor Swift to take a political side hasn't ended well. The country singer-turned-international pop star is famously quiet about her political beliefs, but times have changed — at least, that's what the creator of the Feminist Taylor Swift Twitter account argued last week when she returned to social media after a long absence. Back in 2013, the account exploded in popularity for rewriting Taylor Swift lyrics with a more feminist bent. "Love Story" stressed the importance of consent, Abigail realized that virginity wasn't the only thing she had to offer in a relationship, and we're all feeling 22 cents underpaid. You get the idea.

For the past two years, though, the account has been virtually silent. The few tweets that were posted had a political bent, praising Hillary Clinton before the election or giving shout-outs to people who used Feminist Taylor Swift tweets as signs at the Women's March. In late August, the account's creator, Clara Beyer, returned to Twitter at last. First, she rolled her eyes at conservative personality Tomi Lahren for publicly enjoying Swift's new single. "Oh my god please stop," Beyer tweeted.

Then, after some dude named Brian criticized her for taking time away from the account, Beyer went off. In a series of tweets, she explained her reasons for the hiatus. For one thing, she simply ran out of material.

But the major reason? The United States is a totally different country now than it was in 2013, and it hasn't necessarily changed for the better. Beyer tweeted that she used to be able to poke fun at the patriarchy, but now, "shit in the world has gotten real." It's simply harder to laugh at the wage gap or rape culture when Donald Trump, Misogynist in Chief, is in power.

Beyer added that her sense of humor has taken a far darker turn, which may not be appropriate for the account. "After [Trump] won the election, my favorite joke was that I was going to stop doing anything about menstruation and just let blood run down my legs for four years... It's not quite the [Feminist Taylor Swift] brand. Or anyone's," she wrote.

All of these are totally valid reasons, but the most interesting part of the thread comes somewhere near the middle. Beyer wrote that she had planned to tweet about Swift's sexual assault trial, but then the Charlottesville protests took place. A surprising portion of the alt-right sees Swift as an "Aryan Goddess," and in the Twitter thread, a frustrated Beyer called on the singer to openly condemn her white supremacist fans:

"HELP ME OUT HERE. Tell these garbage people that you would like to be excluded from THIS narrative. If you get turned into some Pepe-like shorthand for the worst of our society I will never forgive any element of society that let this happen. I will retreat into the wilderness forever. PEPE USED TO BE A NICE FROG, TAYLOR."

In an interview with Jezebel, Beyer clarified that she doesn't think Swift has a civic duty to lead the charge to impeach Trump or campaign for a progressive president, but she should speak out against racism in her fan base before it intensifies.

So will Feminist Taylor Swift continue? Beyer tweeted that even with the release of Swift's new album, she wasn't sure what's next for the account.

Much like Swift herself, Feminist Taylor Swift may undergo a reinvention. In the meantime, you can scroll through the account on Twitter to enjoy some good, old-fashioned nostalgia for 1989.

More like this
This TikTok Hard Seltzer Hack Involves A Milk Frother
By Alexis Morillo
American Girl Doll Memes Are Going Viral On Instagram & Tiktok
By Emma Carey
How To Take A .5 Selfie On An iPhone
By Emma Carey
YouTuber Runs Into Margaret Sanger’s Grandson While Filming
By Alexis Morillo
Get Even More From Bustle — Sign Up For The Newsletter