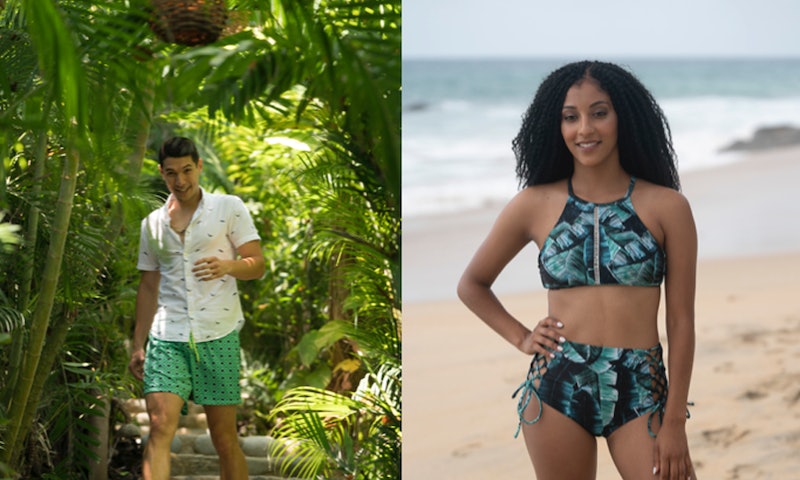 John Graham aka Venmo John was the only one who managed to leave Bachelor In Paradise before the Fantasy Suite dates and not leave his girl, Olivia Goethals, in tears. They left Paradise holding hands in agreement to work on their relationship in real life, so why did Venmo John and Olivia break up after Bachelor in Paradise? They did attempt the long distance dating thing, but Olivia spilled some major tea.

During the Season 5 reunion show, host Chris Harrison recapped the last day in Paradise, i.e. what the viewers watched just last night. He told Venmo John, "That final day in Paradise, you did leave with Olivia." John confirmed with a "Yes," but not much else.

It's safe to assume that Chris had some inside scoop since he turned the conversation to Olivia and asked, "Olivia, what happened?"

Olivia shared, "Ummm. After Paradise, we FaceTimed a lot. We spent the weekend together and it was going really, really good. Then a few weeks ago, you told me that you just want to be friends and I totally understand. Long distance sucks, but I felt like if you wanted to make it work, you would have made that effort."

John shared his side of the story: "I've never been in a long distance relationship before and for me, it felt like our different lifestyles couldn't make that work right now."

And in a matter of seconds, Venmo John went from being one of the most wanted guys in Paradise who was universally liked to getting majorly knocked off of his pedestal.

Olivia revealed, "Then when I saw you like publicizing that you were developing other relationships and that was with Chelsea [Roy]... that you were like FaceTiming her." Wait. What? Why didn't he just pursue Chelsea in Paradise while she was there? Poor Olivia.

Olivia also pointed out, "That could have been time that you were FaceTiming me. I guess, that was a slap in my face." Yes, it truly was. Chelsea did not chime in on the conversation, at least based on what was shown during the episode, but she just looked pretty stunned that her name was brought into this conversation.

As of this moment, none of the three of them as addressed this on social media, but if John and Chelsea really did sit there silently in response to Olivia's accusation, as it was shown in the episode, then it does seem like Olivia is telling the truth.

So what does this mean? Were Venmo John and Chelsea just keeping in touch? Did they try to date each other? Are they dating now? It is just so unclear. Did Venmo John and Chelsea find their own personal Paradise after Season 5 stopped filming? There are just so many unanswered questions, but at this point, it seems pretty clear that Olivia is more than done with Venmo John and that she might switch to another money transfer app in the future.