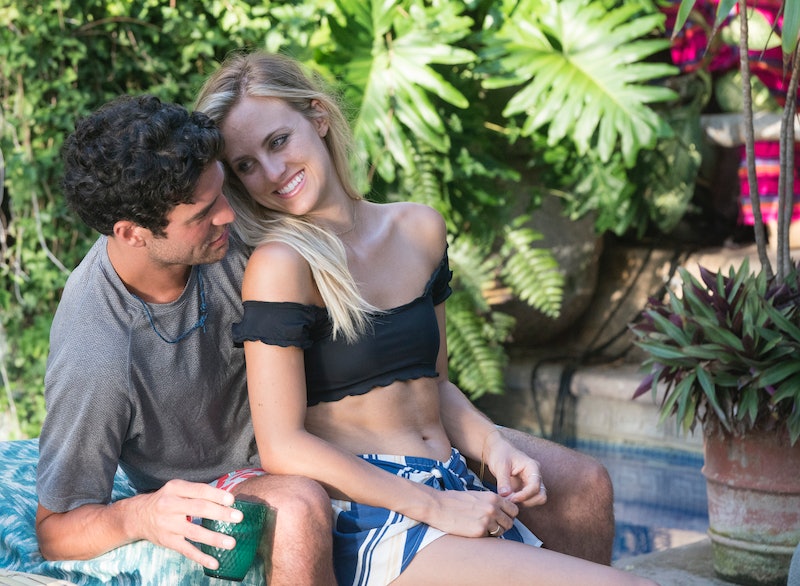 All season long, Kendall and Joe have been one of the most stable couples on Bachelor in Paradise — so much so that it almost seemed like a given that they'd be making it to the end of the season in one piece. But then, on Monday night's episode, everything changed. So what happened? Why did Kendall and Joe break up on BiP? Unfortunately, they just weren't in the same place where their relationship and their feelings were concerned.

As you might have noticed, even though Kendall has spent time with other guys this season (like Leo and John), Joe has never wavered. He's seemed sure of his feelings for Kendall since the beginning, and didn't really show any interest or need to meet other women or go on other dates. So when Kendall didn't seem like she was ready to go all in with Joe, he had to confront her about it, and that's where it all went downhill. According to Kendall, she and Joe were only talking about being exclusive because they felt like they had to, but to Joe, it was more than that. He was falling in love with her, even if she didn't necessarily know if she reciprocated those feelings.

In fact, Kendall even told Joe that while she knew she loved him, she wasn't sure what kind of love it was — and after spending all this time together in Mexico, that seemed really hard for Joe to hear. "The truth is you don't know how you feel about me," he told her. "You've found so many excuses, you're looking for so many excuses not to be with me."

At that point, he couldn't help but come to the conclusion that Kendall couldn't be feeling what he's feeling, and made the decision to leave, which was easily one of the most heartbreaking moments of the season. So many fans have been rooting for Joe and Kendall since the beginning; how could it be over already? After he got in the car to leave, Joe said:

If that exit speech made you cry, it's fine — you're definitely not the only one. And as for Kendall? She seemed to have instant regret that she wasn't able to process the seriousness of Joe's feelings for her in the moment. She said:

"I have a huge fear that I'm never gonna see Joe again. And my heart breaks imagining my life without him. He's just such an amazing person. Around him, everything's just complete and I loved taking care of him."

It's hard to believe that Kendall and Joe are no more, but maybe there's hope they'll find their way back to each other in the future? They're both great catches, so anything could happen.