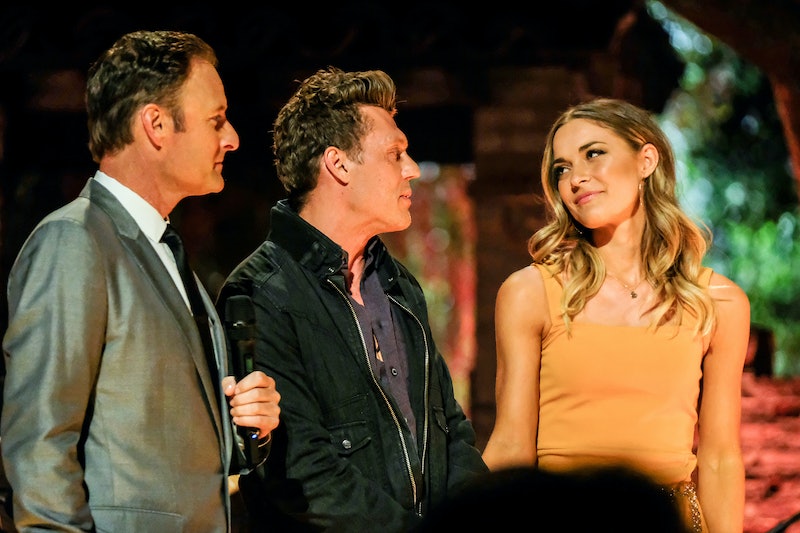 The most dramatic love rectangle on The Bachelor: Listen To Your Heart has officially come to an end — and sadly, so have two contestants' time on the show. After host Chris Harrison forced all of the couples to go on dates with new partners, Brandon and Julia finally addressed their lingering feelings for one another, and as a result, both Sheridan and Savannah decided to go home.

Despite forming a strong connection at the beginning, Savannah and Brandon's relationship has been hindered by his feelings for Julia and his inability to choose between the two women. After Brandon told Savannah, once again, that he wasn't quite over Julia, she decided that she'd had enough of his indecision. "I'm not going to be a choice ... I deserve so much more than that," she told him.

Still, Brandon wanted to give their relationship one last try. "Because I care about you, I’m willing to make the decision now to work this out with you if you think that there's any capacity within your heart to be able to trust me fully," he told her while repeatedly calling her "sweetie" and asking her if they can "talk like adults." But Savannah saw right through his B.S.: "I don't want to figure this out Brandon. This is done for me."

In the car, driving away from the Bachelor Mansion, Savannah explained that she didn't want to have to settle for being Brandon's — or anyone's — second choice. "I want the kind of love that keeps you up at night and you just feel like you're absolutely incomplete without the other person," she explained. "I just thought [Brandon and I] could grow into it. I thought this was a step and it could be something, but tonight I really realized that it's not."

Despite their dramatic split, Brandon and Savannah still interact with each other on Instagram, which means they were at least able to get back on decent terms. Their love story may not have ended in a happily ever after, but it seems that all of the ups and downs taught Savannah exactly what she wants — and what she won't tolerate — in any future relationships.