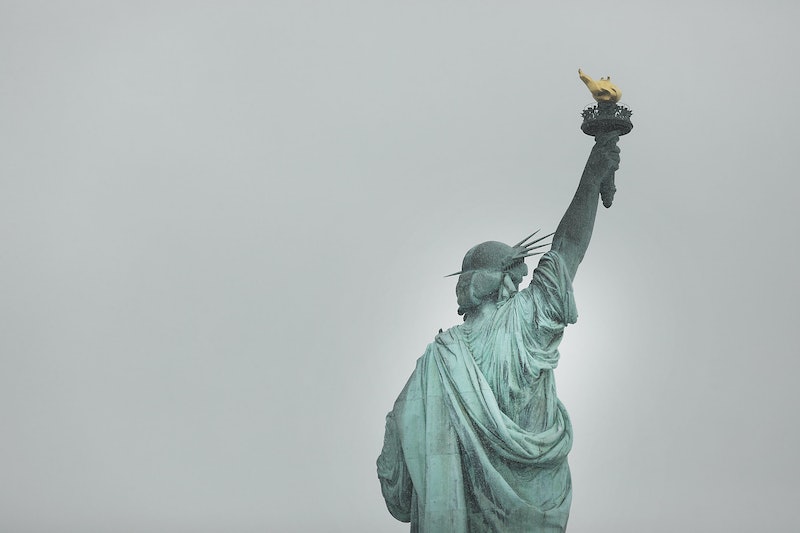 The internet loves a good conspiracy theory, but when the Statue of Liberty went dark mere hours before the “A Day Without A Woman” strike, metaphors were unavoidable. With no explanation forthcoming, the question “why did the Statue of Liberty go dark?” dominated social media after her lights dimmed around 10 p.m. ET Tuesday night. Technically, the statue's lights had not shut off completely — the torch and crown remained lit, appearing to hover in mid-air, while the main sources of illumination that typically light up the rest of the 305-foot statue went dark. The timing of the outage made for a pretty intense photo op, and the symbolism was too perfect to resist. Twitter immediately jumped on the perplexing scenario suggesting that Lady Liberty was perhaps joining the strike, standing in solidarity with her family.

The National Parks Service, which is in charge of maintaining Lady Liberty, announced that the darkening was not an act of protest or social commentary, but instead the result of an unplanned outage. It seems the serendipitous timing of the outage was just that — serendipitous. "A portion of the lighting system that illuminates the Statue of Liberty experienced a temporary, unplanned outage tonight," public affairs officer for the National Park Service Jerry Willis explained in a statement. "The outage was most likely due to work related to an ongoing project to activate a new emergency backup generator that is part of our last remaining Hurricane Sandy recovery projects."

Willis told CNN that when the work was completed, the controller for the lighting system was not reset properly, leading to the notable lighting snafu. Crews investigated the outage Wednesday, but had yet to give more details at the time of publication.

Despite the Parks Service's logical explanation, though, nothing could keep the internet from drawing its own conclusions. The lights came back on around 11:45 p.m., but pictures of the darkened statue had already gone viral on social media, along with (unproven and inaccurate) theories that there were other forces at work. The organizers behind the Women's March even gave Lady Liberty a shoutout on social media, thanking her for her part in the resistance.

The timing of the outage aligned with the International Women's Strike, A Day Without A Woman, International Women's Day, and a number of recent developments in the Trump administration, including the new executive order regarding immigration and travel and the GOP's planned replacement for the Affordable Care Act. Some noted on Twitter that the lights out could be a commentary on the current state of the country — a metaphor for the attempted curtailing of rights and freedoms by the Trump administration.

“This is also why the Statue of Liberty lighting debacle is particularly fertile for metaphor,” The Atlantic explains. “Because it involved the technological failure of a deeply symbolic national icon—an icon which is managed by an agency that has itself become an emblem of the fight against the symbolic extinguishing of liberty’s light.” Indeed, the statue has already been used in protest against Trump’s travel ban when a 20-foot banner reading “Refugees Welcome” was hung on the statue on Feb 21 by the activist group Alt Lady Liberty.

Since 1886, Lady Liberty has stood as a symbol of hope, the chance of a better life, and boundless opportunity for some 12 million immigrants to pass through Ellis Island. This hasn't been the first time she has gone dark, and it certainly won't be the last — but while it may not have been intentional, there's no arguing that her darkness is certainly powerful.