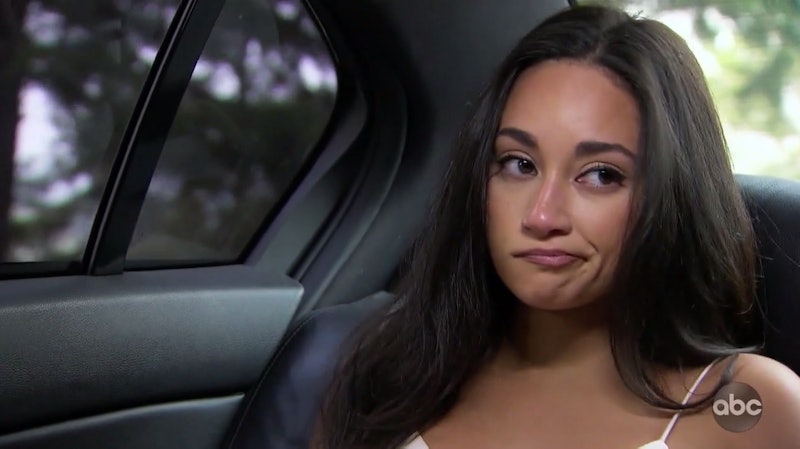 After weeks of kissing, crying and fighting, it looks like this season's most tumultuous relationship has officially come to an end now that Peter sent Victoria F. home on The Bachelor. Despite the fact that they had what Peter called a "perfect day" during their Fantasy Suite date, he ultimately decided that their relationship wasn't at the same place as the ones he has with Hannah Ann and Madison. "I just want you to know how real everything was for me. I was falling in love with you," Peter tearfully told her, before ultimately revealing that "I just feel like I’m farther along with the other girls."

The elimination was particularly shocking to Victoria, who was convinced that Madison wasn't going to show up at the Rose Ceremony after giving Peter her Fantasy Suite "ultimatum." (In fact, she was so confident that she wore a white, wedding-esque gown to the Rose Ceremony.) Victoria, never one to hold back her feelings on any of the other girls, even called out Madison one last time in the car on the way home, blaming her conversation for changing Peter's mind about his relationship with her.

"I think the conversation he had with Madison changed everything he had with me," a sobbing Victoria said as she drove away from Peter in Australia, adding that "I just don’t want him to regret the decisions he’s made."

Victoria's time on The Bachelor has been full of controversy, from her pre-show relationship with country singer Chase Rice to the discovery that she modeled for a company called We Love Marlins, which used racist language and imagery on apparel protesting the overfishing of marlins. Though Victoria apologized for promoting the company, Cosmopolitan pulled their Bachelor cover after she won the photoshoot challenge on the Costa Rica group date. Most notably, of course, Peter's ex-girlfriend, Merissa Pence, crashed Victoria's group date to warn him that the contestant had allegedly "broken up relationships," and when the Bachelor asked Victoria about Merissa's warning, burst into tears, started a fight with Peter and even attempted to run away from him.

Despite frequently arguing with each other over their lack of communication and her habit of "pushing [him] away," Peter has defended Victoria to the rest of Bachelor Nation, who have branded her the "villain" of the season. "All I can speak on is the time I was able to spend with Victoria throughout this experience," Peter said on the AOL Build series in early February. "And I truly enjoyed my experience with her. I really feel like she’s a good person. She’s got a lot of endearing qualities."

While Bachelor Nation may not have understood why Peter continued to keep Victoria on the show — despite the fact that he maintained they had a lot of fun together when they weren't arguing — she offered some insight into their connection after her disastrous Hometown date. "Thank you Pete for always having faith in us & believing in me, even when I would doubt myself along the way," Victoria wrote on Instagram on Feb. 17, alongside two photos of them from Peter's trip to Virginia Beach, VA.

Their relationship might not have always been fun to watch on The Bachelor, but Victoria's elimination made it clear that she and Peter had a strong, genuine bond — even if that bond couldn't survive until the final rose.