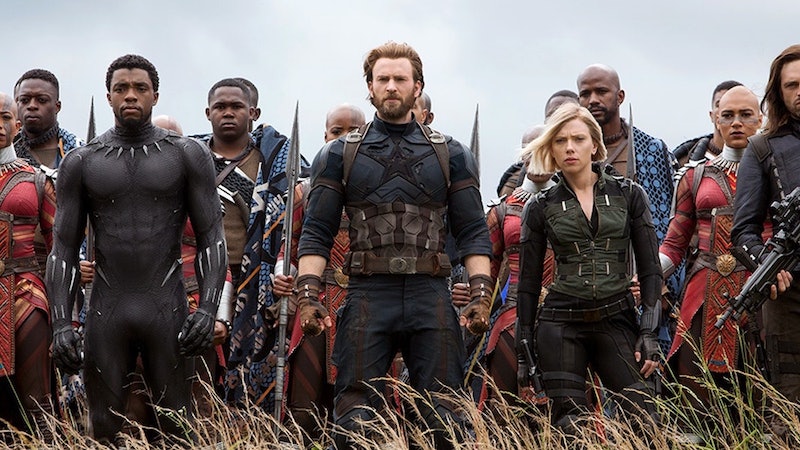 Calling all Marvel enthusiasts: Disney+ unveiled a lineup of all the Marvel films slated to hit the streaming service prior to its launch, but viewers won’t find certain Marvel movies on Disney+ just yet. In a series of tweets on Nov. 11, Disney+ revealed that Avengers: Endgame, Captain Marvel, and Iron Man will join the roster of 16 Marvel titles that will be available to stream. There are some notable films, such as Black Panther and Avengers: Infinity War, however, that won’t be available due to distribution rights and other licensing deals, per The Wrap.

Along with Black Panther and Infinity War, Thor: Ragnarok and Ant-Man & The Wasp are absent from the Disney+ roster since the films are still amid their licensing deals with Netflix. The deal gave the streaming giant an 18-month period of streaming exclusivity. Since the distribution agreement will soon expire, however, the movies could join a number of various Disney films that might vanish from Netflix at the end of its streaming window.

The Incredible Hulk, Spider-Man: Homecoming, and Spider-Man: Far From Home, on the other hand, won’t immediately join the Disney+ roster because the films were distributed with Sony Pictures. Since Disney doesn’t hold the distribution rights, there’s no telling if and when these titles will be able to stream on Disney+.

In addition to the films mentioned above, Disney+ also confirmed that titles such as Guardians of the Galaxy, Captain America: Civil War, Ant-Man, and more will be available to stream. The roster of beloved Marvel flicks will also join a series of brand new Marvel TV shows set to be introduced on the streaming service. WandaVision, a series that will focus on Wanda Maximoff, The Falcon and the Winter Soldier, a series that will follow Bucky Barnes and Sam Wilson, and Loki, a series that will follow Tom Hiddleston’s villain are among the new shows on the Disney+ TV lineup.

In an interview with Variety in April, Marvel Studios president Kevin Feige revealed that the shows are very much connected to the next phase of the Marvel universe — such as the upcoming Shang-Chi movie, Marvel’s first Asian-led superhero film. “These episodes will intersect with the movies in a very big way,” Feige said. “It’s a totally new form of storytelling that we get to play with and explore.”

More like this
Here’s Everything Coming To & Leaving Netflix In February
By Jake Viswanath
At 28, Rosie Perez Risked Her Career To Stop Playing Stereotypes
By Gabrielle Bondi
Helena Bonham Carter Doesn't Think 'The Crown' “Should Carry On"
By Sam Ramsden
Here’s Why Danny Masterson’s Hyde Isn’t In 'That '90s Show'
By Brad Witter
Get Even More From Bustle — Sign Up For The Newsletter
From hair trends to relationship advice, our daily newsletter has everything you need to sound like a person who’s on TikTok, even if you aren’t.