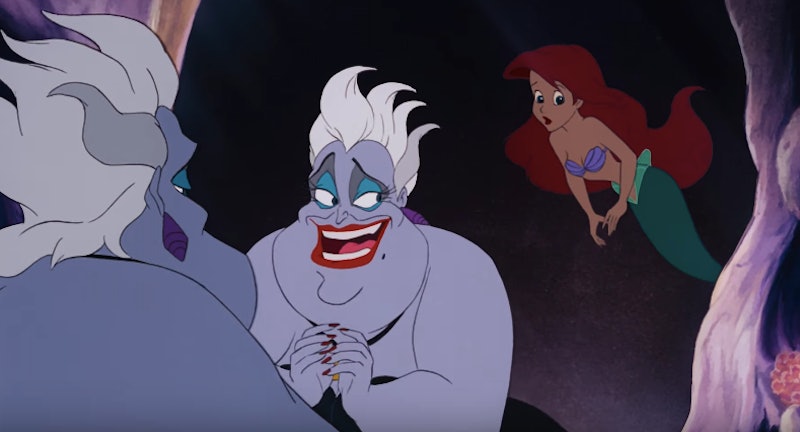 A few poor, unfortunate souls still ride for the Disney princesses fans were always meant to embrace. But what about the villains? After all, they have a few good points to make. This Twitter thread will make you reconsider the way you think about Disney villains — and it's all thanks to Robin Williams' daughter!

Actor Zelda Williams tweeted a joke about Ursula from The Little Mermaid, and it all unfolded from there. "Screw those unachievable paradigms we called Disney Princesses," wrote Williams on June 2, "I only ever related to the smart but overlooked three dimensional characters they called villains."

Alongside some skeptical fans, Williams walked Twitter users through the basics. It was Disney Villains 101, if you will. Essentially, she argued, the villains — perhaps Uncle Scar from The Lion King as an exception — are mostly straightforward. It's kind of on the princesses, the so-called heroes, to not see what these characters are up to. After all, are they not equally established in the film's universes? Do the villains not come with reputations for being intelligent, conniving, and manipulative? And that's even before addressing a universal truth: Disney villains make for the most stylish characters. Also, the princesses have a tendency to get a little... princess-y.

See? She kind of has a point, no? Even the literal Shakespearian villains — Scar and Jafar, for instance — can be viewed in a brand-new light. If the princes and princesses of Disney lore are so naïve, so stubborn, and so interested in only their thing, it's a wonder they make it as far as they do before encountering the villains. The villains rarely try to pretend they're anything they're not. And they often get the short shrift prior to the events of the film, so you can't blame them for feeling disgruntled.

"I'm truly impressed by the narrative gymnastics at play here," commented Twitter user @kyjuedraws. Williams quote-tweeted this, adding, "It's a fun work out." Of course, all of this was mostly in jest. Williams joked about her own tongue-in-cheek commentary the next day, adding that she's a "serious" person all of the time, and her close-reading of Disney villains should absolutely be taken at face value. For those who might not have cottoned on to the actor's dry sense of humor sooner, hopefully her last message will dissuade them from continuing to pepper Williams with complaints in her Twitter mentions. After all, "villain" is half of these characters' titles. Williams knows that calling Disney villains the real heroes is a stretch — a fabulous, body-positive, stylishly dressed stretch — but her point about their three-dimensional nature is spot-on. If nothing else, these characters always know exactly what they want, and they go after it.

And seriously, the styling on the villains! Bold colors, dramatic choices, expert tailoring — each one more of an enticing fashion risk than the next. Most of the princesses are doomed to rock flowy, pastel-colored gowns. Not the villains, though. Even The Emperor's New Groove let Yzma pull off a variety of unique hats.

Once this much evidence is laid out in front of you, it's difficult to ignore. Disney's protagonists often rush. They're headstrong in ways that don't always turn out well for them. They actively disobey parents who (usually) know better. (Okay, that's just part of growing up.) Sure, most folks need to make their own mistakes before they learn, but these kids consistently, unapologetically, get into trouble. Plus, you can't blame a villain for looking out for their own self-interest, right? What do they owe these royal tweens? Nothing, that's what.

Of course, Disney fans are entitled to their own opinions. Even Williams herself swears she was kidding about all of this — the villains do make things pretty nasty for the hero. Even so, it's always fun to see a new spin on old favorite movies.