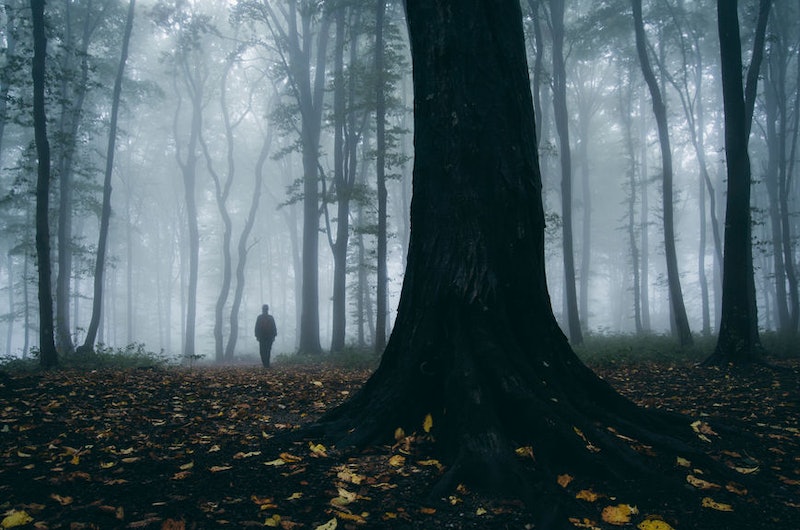 Ghost stories are an age-old part of most cultures, and plenty of us looove getting just a bit freaked out by a good, suspenseful one. Ghost stories have their roots in ancient folklore, and not only do they provide a major creep factor when it's ~spooky season~, they may also point to clues about our personalities. If you've ever wondered why people love ghosts, the answer may have something to do with personality types.

According to The Atlantic in 2014, surveys show that up to 42 percent of the U.S. population believes in ghosts. Numbers are similar in the UK, where 52 percent of the population believes in ghosts and paranormal phenomenon. It’s a inescapable fact of life that there are things we can’t explain, and, as a species, human beings are forever striving to better understand the world around us. According to 16 Personalities, different personality types respond to the unknown in various ways. Some types pivot their sense of reality on skepticism, objectivity, and fact-finding, while others are more open to the strange, ambiguous, and unusual.

Basically, some personality types have more openness to paranormal possibilities, while other folks rely on objectivity and proof in order to assess reality. According to 16 Personalities, intuitive Myers-Briggs personality types are more likely than observant types to believe in the possibility of paranormal experiences, or attribute unexplained phenomenon to the paranormal.

According to folklore expert Tok Thompson, of the University of Southern California (USC) Dornsife, ghost stories often act as reminders of morality, ethics, and justice. Thompson said, "I have found that ghosts generally haunt for good reasons." He continued, "[Ghost] sightings are often a reminder that ethics and morality transcend our lives and that ethical lapses can carry a heavy spiritual burden."

Throughout the world, “People … have kept their belief in ghosts despite the rise of science, skepticism, secularism, and public education,” Justin McDaniel, a professor of religious studies and director of the Penn Ghost Project at the University of Pennsylvania told The Atlantic. While a significant amount of people report having paranormal experiences, according to research, you’re also more likely to experience something as paranormal if you already believe that it’s possible to have such experiences in the first place. In other words, we perceive what we believe. If you believe in the paranormal, you’re more likely to experience unusual phenomenon that way, and if you don’t, you most likely won’t.

That said, there are often explanations for experiences that were historically thought to be paranormal in nature. Take sleep paralysis, for instance, where your brain wakes up but your body's still asleep (which is pretty dang horrible to experience). Waking up to terrifying sounds and seeing strange creatures, while your body is still paralyzed in the REM sleep state, is creepy AF. And while science explains sleep paralysis as a series of auditory and visual hallucinations, many people throughout the world consider them paranormal, according to The Atlantic.

Per 16 Personalities, the varying personality types all carry important strengths, and, when it comes down to it, some people believe in ghosts. So, if you’re an intuitive type, you don’t shy away from the unknown, and you may also be super creative (though you may not actually believe in ghosts). If you’re more skeptical and observant than intuitive, then you excel at bringing the visionary dreamer types back down to earth. Facts, logic, and order are your forte.

Regardless, are ghosts actually real? Who the heck knows. Science doesn’t prove or disprove them one way or the other at this point, and every one seeks answers in their own way. While it’s always a good thing to seek out logical explanations for our experiences throughout life, there are some things we just don’t know.

More like this
30 Winter Outfit Ideas Courtesy Of Hailey Bieber, Rihanna, & More
By Dominique Norman
6 Steps For A Successful Healing Manifestation Ritual
By Kristine Fellizar
These Are The 3 Most Mellow Zodiac Signs
By Kristine Fellizar
13 Gifts From Latina-Owned Businesses For Everyone On Your List
By Marilyn La Jeunesse
Get Even More From Bustle — Sign Up For The Newsletter