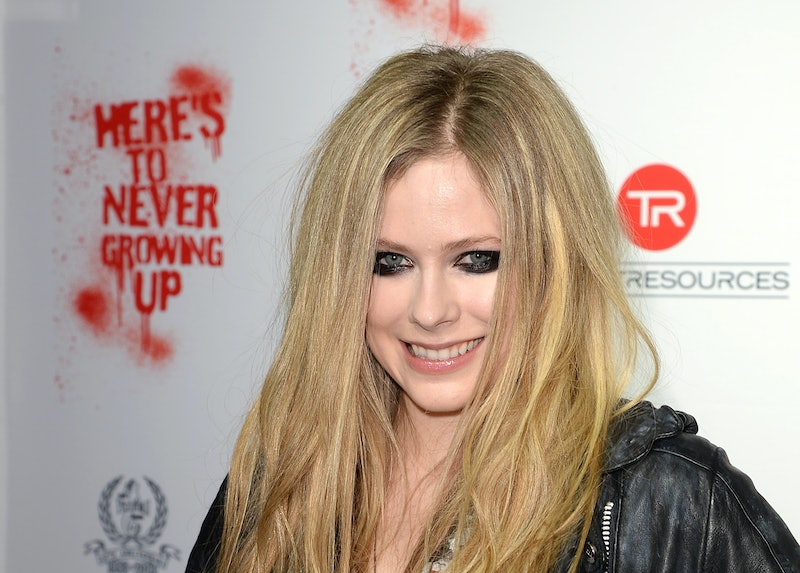 Well, it looks like that Avril Lavigne is dead conspiracy theory has been resurrected once more. On Saturday, Twitter user Givenchyass posted a series of tweets unpacking the evidence behind Avril's death and subsequent replacement by a lookalike. Truth is, this is an old internet urban legend that probably shouldn't get the attention I'm about to give it, and I just don't know why they'd have to go and make things so complicated. But you're now confused about how this theory came to be, I'm going to simplify it.

The humble origins of this theory evolved from an obscure blogspot from a Brazilian fan. Allegedly Avril Lavigne was originally overcome by the pressures of fame following Let Go, and, in 2002, hired a lookalike named Melissa Vandella to ward off the paparazzi. Avril went to work on her sophomore album, and during those sessions her beloved grandfather passed away. She was thrown into a deep depression, which eventually led to her suicide, with the singer being found hanging in British Columbia. But the record company couldn't just let Avril die at the height of her career, so Melissa took her place. By this point, Avril had mostly recorded Under My Skin, and yet somehow Melissa was leaking hints of her passing in songs like "Slipped Away" ("It wasn’t fake, it happened, you passed by).

Seems legit. So the evidence is mainly (though by no means not exclusively) tied to the stylistic changes that happened between Under My Skin and The Best Damn Thing. In terms of facial structure, Avril's nose seems a lot thinner than "Melissa's" and she's missing certain blemishes. More than that, though, the post-Under My Skin era showed a more feminine side to the once tomboyish singer. She was streaking her hair pink, wearing day-glo lingerie in the music video for "Hot," essentially glamming up the image, heightening the "pop" and "princess" in "pop punk princess." And there's a noticeable vocal shift, with Avril's later tracks being sung in a higher pitch with cheerleader-esque chants framing songs like "Girlfriend" and The Best Damn Thing. And there it is. Melissa Vandella is modern day Avril Lavigne.

Except not at all. As the original conspiracy theorist later admitted, Lavigne is not dead. She probably just deduced, like we all did after 2004, that wearing sweatbands as a fashion accessory looked completely idiotic. Like, come on, kids, it's no more complicated than that. Yet in 2014 and 2015 the theory kept resurfacing in the public eye, particularly with a lengthy recap on Noisey, and now it's back in our lives, entertaining us through the weekend. If it's so overtly fake, then why is this story still a thing?

Chalk it up to society's overall morbid fascination with celebrities and the underbelly of fame. From the classic Paul McCartney is dead hoax to that whole Katy Perry is JonBenét Ramsey thing, we love thinking there's something darker, albeit ridiculous, hiding out in pop culture. And so the myth of Melissa Vandella lives on.