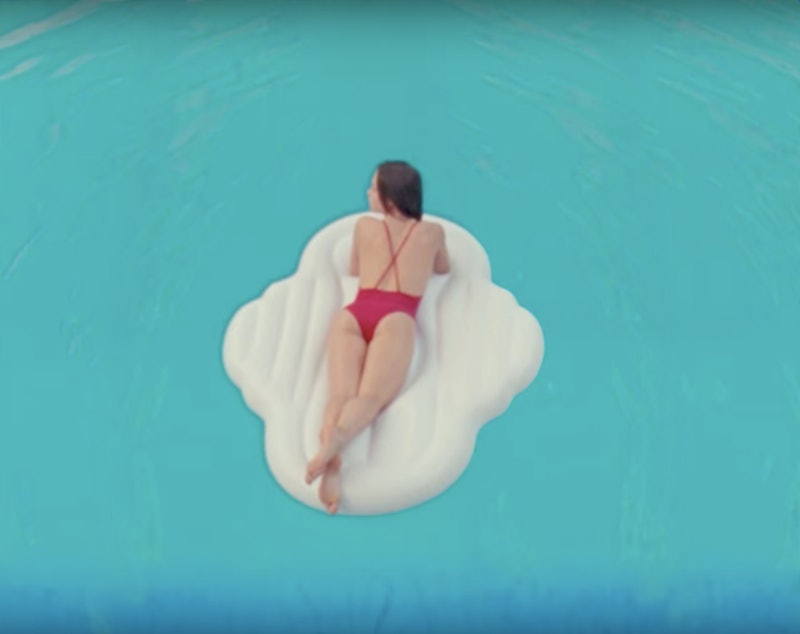 For anyone who's ever had menstrual products marketed to them, whether on TV, the internet, or in magazines, one particularly vexing question has always been why companies represent menstrual blood with a weird, clinical blue liquid in period product commercials. Using something that looks like actual blood to stand in for menstrual blood has been, in every preceding decade of tampon and pad advertisement, as completely off-limits as full-frontal nudity. Recently, Libresse, a UK-based menstrual hygiene brand produced a campaign for Bodyform pads that featured not a blue liquid to demonstrate the product's absorbent properties, but a red one. This follows the innovation of Always in 2011, which debuted an ad in America showing (gasp!) a red spot on a pad. These may seem like a small step to take, but in the history of visual representation and menstruation in modern culture, it's an enormous one.

Discomfort about menstrual blood has deep cultural roots that have led to the use of mystery blue liquid in menstrual hygiene product commercials. In many ways, we're still carrying the consequences of ancient beliefs about menstruation and its "impurities", from Pliny the Elder's belief that it could spoil crops and kill bees, to medieval European myths that periods were a contaminant. Menstruating people throughout human history have been ostracized, regarded as unclean, and forbidden from access to areas as diverse as religious institutions and their own households. Period taboos continue to have strong holds worldwide; the existence of "period huts" in certain parts of Nepal, for instance, resulted in tragedy in 2016 when a woman forced to stay in a hut at a distance from her family home overnight while she was menstruating died of unknown causes.

Menstrual blood isn't subject to the same taboos as other blood, as visual media in American history show. A medium level of bleeding from wounds has been a part of modern media without much comment for most of the 20th century. Menstruation, however, was so out of the question that it didn't even feature on the Hays Code list, or Hollywood's censorship bureau which was in effect from 1930 to 1968. Depictions and usage of menstrual blood in visual work have largely been the province of the art world since the 1970s, as female artists like Judy Chicago have tried to reclaim it and make it a respectable, powerful or even unremarkable substance, rather than an automatic taboo.

Menstrual blood tends to be classified alongside feces and urine as a human waste product that requires disposal, culturally speaking. Despite the fact that menstrual blood and tissue are entirely sterile until it comes out of the body, the products of menstruation continue to be considered dirty, hence the many, many euphemisms we use to refer to them.

If you look at the history of menstrual ads themselves in Western society, dating to the end of the 19th and beginning of the 20th century, using euphemisms is the order of the day. The first marketed products to help menstruating people were rubber aprons or bloomers, simply called "sanitary" products. The development of "sanitary" wording, which avoids any reference to menstruation, periods, or blood, continued for decades, from marketing to the sale of period products. Brands such as Kotex and Modess emphasized the discretion of their sale models: people could put money in a tin and take pads from boxes without needing to address a salesperson, or purchase pads "disguised" in wrapped boxes.

And that didn't change when television increased the reach of the advertising world. The trope of a menstrual product ad that never mentions or even alludes to "that time of the month," but rather shows women running worry-free while wearing white trousers, is a long-standing joke. Part of the reticence to actually show or mention menstruation came from America's long legal history of restricting "obscenity" in advertising, a Puritanical touch that resurfaced in 2016 with the furor over (relatively tame) THINX period underwear ads on the NYC subway. Under these laws, advertisers had to play on the right side of the line to avoid being banned or facing complaints.

It was in the 1990s that the "blue liquid" idea emerged in television advertising, to reflect both a changing landscape and a clash in ideology. After Courtney Cox, in a Tampax ad in 1985, became the first person to say "period" onscreen, American advertisers now felt capable of showing pads onscreen, but needed to balance the need to demonstrate the products' absorption with the audience's possible cultural disgust reflex at seeing any menstrual blood-like substance. Their solution? Blue liquid. As different commentators have noted, other color combinations — pink, purple, yellow or brown, even orange and green — have associations with different organic bodily fluids or functions. By contrast, blue is uniquely clinical and evokes cleaning products, like bleach or dishwashing liquid, emphasizing a sense of 'cleanliness' and hygiene rather than one of dirtiness (or even natural-ness). It could show absorption and create a sanitary atmosphere instead of reminding people about, well, blood. (A commenter on Feministing noted in 2008 that the tendency of diaper advertisers to also use blue liquid to stand in for urine led to some confusion about what pads were meant to "do" among her childhood male friends.)

The debut of liquid that bears resemblance to blood (it's still a sanitary red liquid, after all) in period product ads instead of inorganic, lab-brewed blue liquid represents a new point in a long journey of de-mystifying and re-imagining menstrual flow. At the end of the day, menstruation happens to a full half of the population once a month — we need to accept that it's not dirty. And frankly, that blue stuff looks a lot more alarming than blood itself.