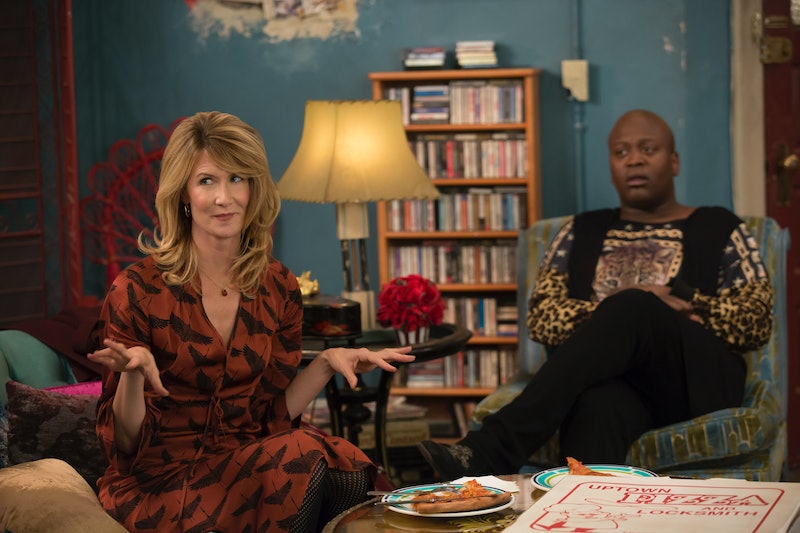 Unbreakable Kimmy Schmidt has a TV-14 rating, which — according to Netflix's maturity rating Help page — is for teens and older. The FCC's page about ratings says that TV-14 also means "parents strongly cautioned" and while that can include language or suggestive dialogue, Refinery29 documented that movies or shows with the teen rating don't typically drop the f-bomb. The Mary Sue also brought up the fact that premium cable channels like HBO don't need advertisers and thus can get away with more profanity than basic cable since advertisers usually prefer shows that have mass appeal with less vulgar language. Netflix falls into this premium cable loophole, but it seems that for Unbreakable Kimmy Schmidt to stay safely within its TV-14 rating and draw a wider audience, it avoids saying the f-word. So "foop" is a convenient, funny, and silly way to workaround it.

Titus uses "foop" twice in the beginning of Season 3 to display his outage at Mikey ("What the foop?!" and channeling Beyoncé's Lemonade with "Boom, boy, bye, foop") and the catchphrase is a pivotal identifier later in the season, but fans of Kimmy Schmidt may have picked up on Titus saying it before. Like in the Season 1 episode, "Kimmy Rides a Bike!," Titus says, "You think the Reverend Martin Luther King wanted to wear a bikini and put on angel wings and gyrate on the Gay Pride Parade float? Foop! I'm mixing up my struggles." Or in the Season 2 episode, "Kimmy Kidnaps Gretchen!," when Titus says, "Pardon my French, but le foop," further proving that "foop" acts as a curse for this Kimmy Schmidt character.

Vulture also wrote that the made-up expression "foop" is a callback to Tina Fey and Robert Carlock's other show — 30 Rock — since the NBC series used plenty of made-up expressions, like Liz Lemon's "blerg." So while Urban Dictionary has a disturbing array of definitions for foop (seriously, beware before clicking), it's just a humorous exclamation for Titus. And it's a perfect substitute for the f-bomb when you need to be on your best behavior and want to be as effortlessly dramatic as Titus Andromedon. After all, who needs something stronger when you have foop?