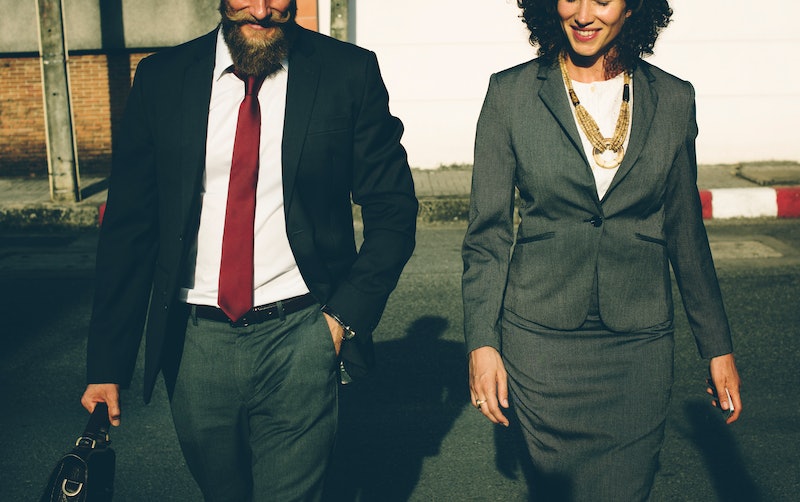 Establishing gender equality starts by uncovering what’s creating imbalance in the first place. Harvard Business Review sought to do just that in a new study on gender inequality at work, looking at how men and women behave in the workplace and the ways in which they’re treated differently. They’re findings? While men and women seem to act the same at work, they are still treated differently. While that may not sound groundbreaking in and of itself, it’s significant to how we should be thinking about solutions to inequality in the workplace.

Understandably, answering questions like, “Why are women underrepresented in management positions at work?” or “Why do women get paid less than men?” aren’t all that easy. The answer essentially requires unpacking what causes sexism as a whole. If only it were as simple pinpointing one, single thing we could hold responsible for gender discrimination— finding it, trapping it under a cup, and squashing it for good.

While we’ve got work to do when it comes to gender equality, Harvard Business Review’s new study is bringing us one step closer to understanding what is and, more importantly, what is not causing gender imbalance in the workplace. Basically, their findings suggest that focusing on changing the way women present themselves at work, with the Lean Ins and #GirlBosses of the world, do little to address the core of the problem: women are treated differently than men regardless of how they act at work.

Harvard Business Review’s study (conducted by data analysts and Harvard graduates Stephen Turban and Laura Freeman; and Humanyze CEO Ben Waber) looked at a mixture of email correspondence and meeting schedule data for hundreds of employees at a large multinational business strategy company. Additionally, researchers gave 100 employees sociometric badges to track their in-person behavior. These badges, which looked similar to employee’s ID badges, recorded metrics of individual’s communication behaviors using movement sensors. The sensors measured who talked to whom, who spoke more, where people spoke, as well as volume and tone of voice. Content of the conversations were not recorded for anonymity purposes.

The researchers hypothesized that differences in behavior may be playing a part in the lack of female representation when looking at this company's corporate ladder. (“Perhaps women had fewer mentors, less face time with managers, or weren’t as proactive as men in talking to senior leadership,” the study states.) However, an analysis of the data showed “almost no perceptible differences” between male and female employees’ behavior.

Here are the behavioral similarities listed in the study, just to really drive the point home:

“Women had the same number of contacts as men, they spent as much time with senior leadership, and they allocated their time similarly to men in the same role. We couldn’t see the types of projects they were working on, but we found that men and women had indistinguishable work patterns in the amount of time they spent online, in concentrated work, and in face-to-face conversation. And in performance evaluations men and women received statistically identical scores. This held true for women at each level of seniority. Yet women weren’t advancing and men were.”

The biggest takeaway from the study, in the words of its authors, seems to be this: “Gender inequality is due to bias, not differences in behavior.”

“Our data implies that gender differences may lie not in how women act but in how people perceive their actions,” the study states. Researchers also suggest societal pressures outside of the workplace (e.g. leaving work to take care of family) could have an effect on women being promoted at work and their wages. (Previous research on maternity leave has found similar results: women taking unpaid leave to raise kids and returning to the same job often see pay cuts.)

One way companies can start addressing this issue, as stated by the study’s authors, is by implementing programs that work to combat gender bias. “While programs aimed at strengthening women’s leadership skills are valuable,” the authors state, “Companies also need to focus on the more fundamental — and more difficult — problem of reducing bias.”

So, if anyone wants to write a book teaching companies how to lean in and listen to women, we have a few places you can send some copies.