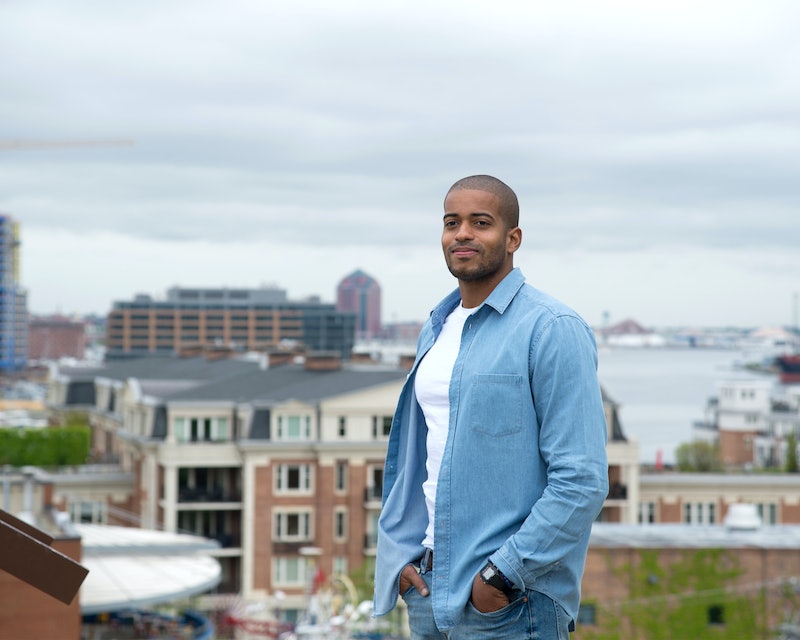 Rachel's season of the Bachelorette may still be winding down, but the hunt for the next Bachelor is well underway. Now 15 years into the franchise, there's a vast pool of candidates, and producers have been known to throw a curveball or two when it comes to choosing the show's next lead (looking at you, Nick Viall). But for now, all eyes seem to be on the remaining men. Convincing cases have already been made for Bryan and Peter, but of the three, it's actually Eric who would make a perfect Bachelor.

Before Rachel, Bachelor Nation had a long and troubling history with racial representation. Across its decade-plus run, only the reviled Juan Pablo — a blonde, Venezuelan former soccer player — would qualify as bringing any diversity, and even when non-white contestants were cast on the show, they seldom made it far. Rachel was the first black woman to earn a first impression rose and make it to the final three, let alone become the first black lead.

With Eric, the franchise has the chance to once again make history, proving to viewers that Rachel wasn't just a fluke; Bachelor Nation is committed to diversity as more than just a onetime check mark. Eric is, of course, far more than just his ethnicity, but it would be an oversight to ignore yet another momentous opportunity to broaden the series' horizons — especially when Eric is already a standout contender.

He's actually quite similar to Rachel: Accomplished, poised, beloved by fans. His time on the show hasn't always been smooth, but with the drama — and the men that caused it — far behind him, he really blossomed in the back half of the season, revealing a man who not only embraced the experience wholeheartedly, but seemed genuine and gracious while doing so. Ultimately, his early insecurities only made him feel more real.

Rachel has, for her part, been skeptical of Eric at times, and rightfully so. By his own admission, Eric has never been in love before, and that could make it difficult to distinguish between reality show puppy love and something potentially life-lasting. But Eric has been remarkably vulnerable and open, and has done some quite revelatory self-reflection along the way. Between Bryan's charmer aura and Peter's hesitation, Eric actually seems to be the most emotionally available of the bunch. If he weren't ready to commit pre-Bachelorette, he certainly appears to be now.

Plus, it would be remiss not to mention that his backstory is ripe for reality TV gold. He grew up under difficult circumstances but refused to let that define him, and built a life for himself dictated by positivity and achievement. Not only is that the kind of inspiring tale ratings thrive on, but it gives The Bachelor an opening to move past tired territory and explore what it means to have a family outside of the more "traditional" households it usually depicts. The kicker? America is already in love with Eric's Aunt Verna (who, by the way, said he's definitely ready for love, and who's to argue with a wise woman like her?).

So really, there's not a mark Eric doesn't hit when it comes to why he'd make a perfect Bachelor. If he doesn't end up with Rachel, that next set of roses should be his for the taking (or rather, his to give away).