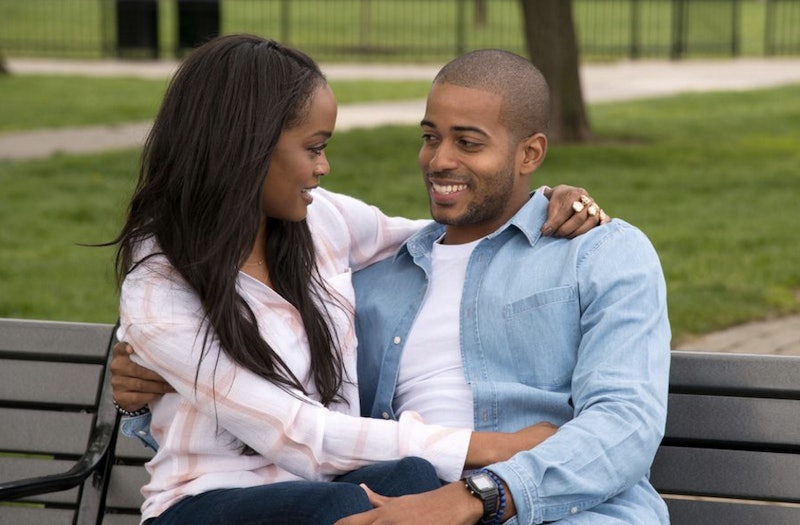 It's been obvious since approximately Week 2 that Rachel Lindsay is almost certainly going to choose Peter as her Bachelorette winner, so it's hard not to put more of your focus as a viewer on who the next Bachelor will be. After all, in Bachelor Nation you're not just rooting for love, you're also rooting for the next person you will get to see find love, because this show is an endless cycle that we will all still be watching when we're 80. There are a few people who seemed to get "the Bachelor edit" at different points this season — Kenny and Will included, prior to their sudden departures — but now that we're down to the end and there isn't anyone standing out as the clear choice, I have to ask a question that I didn't see coming when this journey began: Could Eric be the next Bachelor?

My initial reaction was no. I like Eric. I've been a fan of Eric's since "my name is in your mouth." He's cute (especially with the beard). He stands up for himself. He gets super excited about traveling. He seems like he's really found himself and that his confidence has grown as the show has progressed, which has been a joy to watch. He's genuine in his conversations with Rachel. He's black. (Look, I'm not even going to talk around it. There has not been a black Bachelor; Eric being black is a plus.)

So, why don't I immediately see him as the Bachelor? Because this show has trained me to believe that the person who becomes the lead is very serious about not only finding love, but finding a future spouse who they will get engaged to after only a few weeks of knowing each other. There's almost a certain sense of desperation that you're made to feel about the Bachelor or Bachelorette, whether that is feigned or not. But Eric has been so honest about his history, that it's easy to say "he's not ready" to be the Bachelor even if what he's "not ready" for is deciding on a life partner after only a couple months — something virtually no one is ready for. It could be harder for me to suspend disbelief with Eric because of what we already know about his experience.

We've seen Eric's insecurities on the show, and it's hard to imagine someone, who it feels like has been getting to know himself through this process, have to soon after present himself and what he wants confidently to 30 women. With someone like Eric, it might be harder to take the process seriously while watching him, as compared to someone like Rachel who not only knows what she wants, but (and considering this is a TV show, perhaps more importantly) also always comes across like she knows what she wants on screen. But, the success rate for The Bachelor in particular is low. When it comes down to it, it's a tossup regardless of who the lead is and how much experience they have in the love department, so, sure, why not give Eric a shot?

All that said, I do think a season featuring Eric would be entertaining and different in a way we haven't seen before. Obviously, he would be the first black Bachelor, which would be great and long overdue. But I also believe we would be watching someone continue to find themselves on screen, which could be interesting and give us a more in-depth look at a person.

When Eric opened up to Rachel about how he always felt like he had to look out for other people, but has never had someone look out for him, we basically witnessed someone having a revelation about themselves. Overall, this season of The Bachelorette has felt real in a way we haven't always gotten — from Rachel saying that she has to be selfish even though there's a lot of pressure on her as a black woman starring on the show to weathering Dean's hometown date with his estranged dad. A Bachelor season focused on Eric feels could absolutely be a continuation of that theme.

We know that he would love the trips, that his family— Aunt Verna included — would be supportive of him, and that he would be honest. He might find a wife, he might fall in love with 10 people, he might get overwhelmed with his insecurities, he might end up not being a good Bachelor. There would be uncertainties with Eric as the Bachelor. But with this show, there always are.