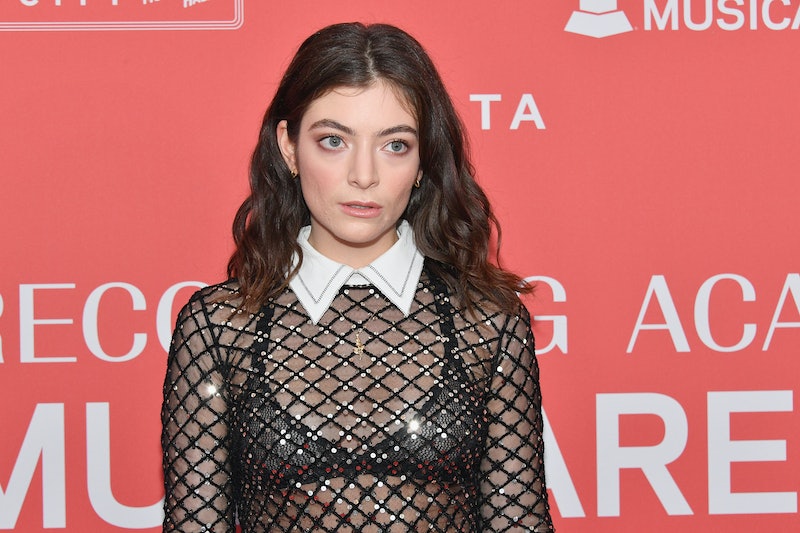 Fans were distraught and confused to hear that Lorde wouldn't be performing at Sunday, Jan 28's 2018 Grammy Awards, and it seems that the pop artist noticed the slight as well. Though she has not commented publicly about her absence on the show's stage, she sent out a tweet that had fans thinking that Lorde shaded the Grammys. At the 60th Annual Grammy Awards, Lorde (born Ella Marija Lani Yelich-O'Connor) was the only artist nominated for the coveted Album of the Year Award that was reportedly not invited to perform solo, according to Variety. She was reportedly invited to perform in the Tom Petty tribute with other artists, but she declined the invite. (Bustle reached out to Lorde's reps and the Grammys regarding the reported solo and group performance invitations; Lorde's reps declined to comment. The Grammys have yet to respond.)

At the ceremony yesterday she skipped the red carpet all together. Lorde did seem to reference the slight on Monday, Jan. 29 on Twitter. She wrote,

"IF YOU’RE DEBATING WHETHER OR NOT I CAN MURDER A STAGE... COME SEE IT FOR URSELF."

Some fans thought this snub might have had something to do with her being female. Of the six artists nominated this year for Album of the Year, Lorde was the only woman nominee. The other artists included Jay Z (4:44), Childish Gambino (Awaken My Love!), Kendrick Lamar (DAMN), and the winner Bruno Mars (24K Magic). Lorde's mother, Sonja Yelich, pointed to this gender discrepancy on Twitter with a screenshot of a New York Times article that stated that only 9-percent of the 899 nominees for Grammys in the last six years were women. "This says it all," Yelich wrote in the tweet.

Lorde also was not afraid to wear her feminist views in plain sight. Unlike other women musicians and singers, she also did not participate in wearing a white rose in solidarity of the Time's Up moment — opting instead to fashion her own iconic statement using a hand-written note and a safety pin, which she posted a photo of to Instagram. The note, which Lorde fastened to the back of her red dress, used a quote from neo-conceptual feminist artist Jenny Holzer. The quote promotes a future where the patriarchy is upended. It reads:

"Rejoice! Our times are intolerable. Take courage, for the worst is a harringer of the best. Only due circumstance can precipitate the overthrow of our oppressors. The old & corrupt must be laid to waste before the just can triumph. Contradiction will be heightened. The reckoning will be hastened by the staging of seed disturbances. The apocalypse will blossom. - J. Holzer."

While it's unknown why the Grammys would not extend the same invitation to Lorde as it did her fellow artists, it is clear that the award show missed quite the opportunity. At the 2014 ceremony, Lorde, then still a teenager, gave a stand-out performance of "Royals." That was the year she also took home the Grammys for Best New Artist and Best Pop Solo Performance. Even when Lorde is not at the top of her game, like during the MTV Video Music Awards last summer when she had the flu, she still gave an interpretive dance performance that kept people talking.

Some Fans Had Words For The Recording Academy

An what they saw as possible hypocrisy.

Other Fans Pointed To Other Women Who Deserved A Grammy

Whether or not Lorde is rewarded the next time she comes out with album, the Recording Academy has a long way to go to celebrate and represent women performers.