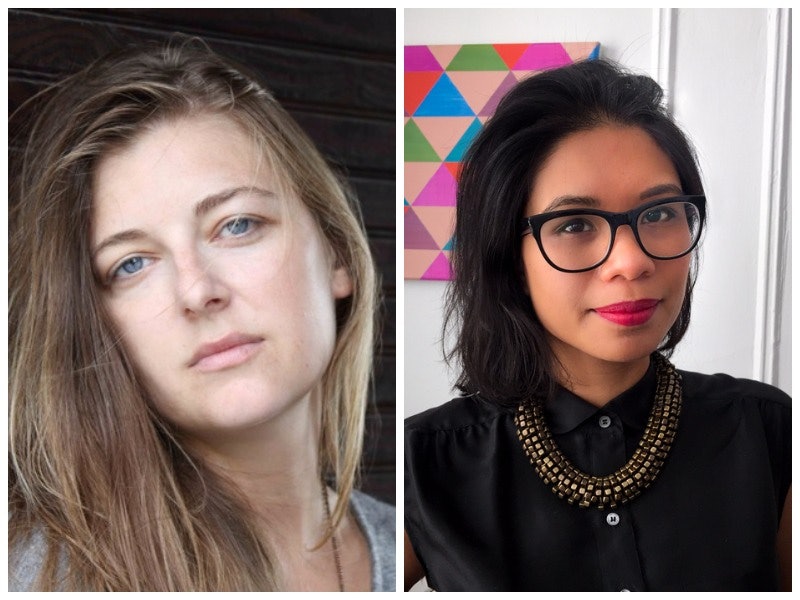 With the We Need Diverse Books movement, as well as the call for more Own Voices books, feminism in young adult fiction has become more important than ever. Readers expect to see women (and men, for that matter) writing strong women, complicated women, kick ass women — probably most especially in fantasy worlds. Rhoda Belleza, author of Empress of a Thousand Skies, out now, and Lexa Hillyer, author of Spindle Fire (April 11, 2017, Harper Teen) are both equally passionate about bringing a feminist lens to YA.

Belleza believes that a work is feminist when it, at the very least, "honors and values a woman's humanity and complexity." But, of course, there is so much more to it than that.

"Avoiding problematic stereotypes is pretty much the bare minimum. What takes more work is writing a believable woman who navigates her life given the way of the world. I'm not just talking about addressing the status and rights women are afforded, but the cultural implications, too—how quickly we're categorized and sorted based on our looks, the fear that's cultivated in lots of us to appear agreeable and relaxed, the belief that our emotional life is a detriment to our careers, and the fact that on a national average, I get paid $.70 to a man's $1.00," Belleza says.

Of course, there's no arguing that all of the above is crucial to a feminist text. But how do we apply this to a fantasy world where the rules we play by in real life can be entirely turned on their heads, where women are often billed as leaders, political rebels or warriors? Where the wage gap between men and women may be non-existent? For one, Belleza does not believe that a feminist fantasy has to be overtly political.

"It's more an issue of seeing a character moving through the world, pursuing their goals, and pushing up against rigid structures and sociopolitics in place, in whatever sly or overt ways work for them," Belleza says. "A story that features a woman fighting a political fight (i.e. suffrage, pro-choice) isn't inherently more feminist, because maybe the women are written terribly, you know?"

Interestingly, both authors also believe that feminist texts need to address the way that they write their male characters, too. More specifically, feminist YA cannot be truly feminist if it disregards female stereotypes but continues to perpetuate equally damaging male ones.

"There are just as many restricting tropes for male as there are for female characters. For example, what if a man becoming a hero is treated as remarkable and unlikely, instead of expected? I think through a feminist lens it’s equally important to show the vulnerability and dynamism of the internal life of male characters as it is to show the strength of female characters, and of course, to explore characters who don’t identify fully with either of those genders and their associations," Hillyer says.

For their own part, Hillyer and Belleza are working to re-write feminism in genre fiction with their own soon-to-be-released books. Belleza's Empress of a Thousand Skies has been billed as sort of Game of Thrones in space and follows Rhee, the Crown Empress, and Aly, a refugee wrongfully accused of killing Rhee. With planets on the brink of war, Rhee and Aly are thrown together to confront a ruthless evil that threatens the fate of the entire galaxy. Hillyer, for one, thinks that the way romance is written (or not written) in Empress of a Thousand Skies is indicative of the right kind of change in YA.

Empress of a Thousand Skies by Rhoda Belleza, $12, Amazon

Lexa Hillyer says: "There’s less slut-shaming in YA, but it’s complicated, because sex is a big deal for teens. So the opposite of shaming can’t just be casual acceptance, if that makes sense. Most characters have to grapple with it, in order for the story to feel authentic. But there are also more books where sex and love simply aren’t the primary concerns of the female protagonists. I am obsessed with Rhee in Empress of a Thousand Skies and I really love how [Belleza] wrote her narrative without the need for a romantic arc. It’s not an element that Rhee’s own growth hinges on."

As for Hillyer's Spindle Fire, a Sleeping Beauty retelling, the story follows half-sisters Aurora and Isabelle as they find themselves up against a Faerie Queen and her army of Vultures in a race to save their kingdom. Feminism in fairytale has long been debated, most especially because of their focus on romantic plots. But, for Hillyer, there is no need to remove romance in order to insure a book's feminist leanings.

"Yes, I’m definitely a romantic at heart and there’s absolutely a way to be both feminist and romantic," she says. "In Spindle Fire, Aurora and Isabelle don’t have standard relationships with love itself. Aurora glorifies love, and her journey is about understanding that she knows far less about it than she thought. Isbe, on the other hand, shirks from love, perhaps even looks down on it, and is thus surprised and even angered when she feels it awakening inside her. She fights the idea of falling in love and the idea of being her own hero, actually."

It's clear that the idea of allowing men and women to have emotional complexity within YA is a huge part of the fight toward feminist-leaning texts. But it is also crucial to rethink gendered actions and reactions.

"YA feminism has become more exploratory in that regard, and I've seen the inversion of tropes more and more. Girls contain multitudes—they always have—but what I'm seeing across all children's and YA books is a gender and identity fluidity," Belleza says.

Authors are more and more steadily moving away from one-dimensional women in particular, and toward a more open-minded view of what it means to be feminine.

"It previously felt common for a girl to be considered a bad ass if she wasn't girly, like the two were mutually exclusive. Like "girly" was a bad thing," Belleza says. "But girls can be unrivaled martial arts masters who also cry sometimes and want to find love. They can be princesses who love poufy dresses and are deadly with a knife. They can love girls and boys, and they know and respect what trans means. Basically, it's a subtle shift of these characters forming their own fluid identities, picking and choosing elements that feel right to them."

But, there can also be a dark side to writing kick ass women in fantasy, as Hillyer points out: the dreaded "Super Woman" trope that women grapple with in real life all the time.

"I think sometimes what we’re often doing in YA sci-fi/fantasy is similar to what women are doing to themselves in real life. I feel this so much more now that I’m a mom and I expect myself to be in a million places at once. We’re saying: “You can be everything” which translates to “You should do it all.” You should be able to wield a sword and act the hero and maintain your hair," Hillyer says. "I think we’re sometimes producing these unrealistic characters and unrealistic expectations for girls and women. Perhaps it’s time to show that heroism and strength can come at a cost, regardless of your gender. If a female character must choose between heroism and love, how many in YA are choosing the former? How many are choosing the latter? Neither choice is more feminist, per se, but I believe that making the choice is feminist."

So, what remains for YA writers to consider when it comes to making sure their characters and their books are encompassing these new definitions of feminism? For Belleza, that is perhaps not the most crucial question to ask.

"I think YA is already doing a great job of creating strong female characters who fight oppression and patriarchy, across all genres and skin colors and time periods," Belleza says. "I'd actually flip this question back to the critics and gatekeepers: what needs to be done so these feminists' works are reviewed and championed?"