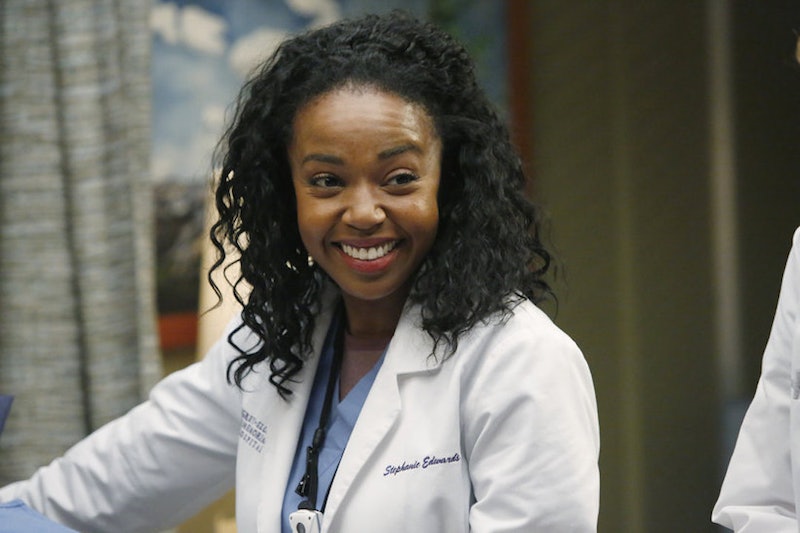 The long-running ABC series Grey’s Anatomy has had many interesting characters, but few were as dynamic and relatable as Cristina Yang. Like most fans, I cried when it was announced that Sandra Oh was leaving the show, wondering who would inspire me with their shameless ambition and whose sarcastic quips would make me laugh uncontrollably every Thursday night. I didn't realize how much Stephanie Edwards grew to become that person for me, until it was announced that Stephanie actor Jerrika Hinton wouldn't return for Season 14. And, frankly, Season 14 isn't the same without Stephanie's role on Grey's Anatomy.

Towards the end of last season, viewers were left wondering about Stephanie's fate after she and a young girl were trapped in the same room as a massive explosion. Miraculously, both survived. Although they suffered burns, smoke inhalation, and various other wounds, they both would soon be on the road to recovery. But Stephanie wasn't eager to get back into the operating room as a surgical resident. The whole ordeal — coupled with her history as a sick child — made her realized she didn't want to spend any more time behind the walls of a hospital. She told her mentor Dr. Webber that she needed to get outside and live — thus saying peace out to Grey's Sloan. And, I've been sad ever since.

First introduced in Season 9, Stephanie along with Jo, Shane, Leah and Heather made up the next class of clueless interns to begin their careers at the fictional Seattle Hospital. Stephanie's quirky personality and commitment to being the best at her job quickly branded her as Cristina 2.0. in my eyes. She was an absolute star when it came to surgery and was crushing it under the guidance of Amelia, Arizona, and Karev. Additionally she became the voice of reason for the other interns, particularly Jo.

Hinton's departure was blessed by Shonda Rhimes, who wrote in a statement posted to Twitter that Hinton left to try something new creatively. "Jerrika has shared so much of herself with Stephanie and I am incredibly proud of the journey we've taken together," she wrote. In another tear jerking social media post, Hinton took to Instagram to pay homage to her beloved character and shared how it was an "honor" to portray Stephanie over the years. "To the ones who look like me — it is for you that my heart burns brightest. I hear you when you say I represent you. Thank you for your warmth and patience."

Rhimes has a way of making fans feel a connection to characters who look nothing like them and for years that was the case with me. But once Stephanie came around, I instantly knew that I had found my TV twin. Like her, I can't see worth a lick and giggled during the episode where she struggled to see with no glasses on, shouting out, "That's so me," at the screen. At a moment in time when so many viewers are looking to see themselves reflected on TV, Stephanie provided a positive portrayal of what it's like being to be a young black woman in the professional world.

She proudly rocked her natural curls day-in and day-out. She wasn't afraid to speak up for fear of being labeled as aggressive. Romantic relationships didn't get in the way of how she did her job — and she would even go so far as to end them if she felt like they were. Her drive to succeed wasn’t rooted in some deep-seated need to excel in the eyes of others. Instead, Stephanie was simply passionate about saving lives, and that was something I hadn’t seen in many characters on Grey's since Cristina left.

Of course I'm not the only one missing her presence as a new wave of Grey's commences. In the Season 14 premiere, a distraught Jo repeatedly mentions Stephanie, sad that she didn't even get a chance to say goodbye. She and Stephanie had become a dynamic duo, sort of like Meredith and Cristina, and Jo struggled with figuring out who would be her "person" moving forward. Ben Warren attempted to be her go-to guy for all Jo's love and dating advice, but he broke "girl code" just as quickly as Jo told him what it was, by sharing her thoughts with Alex.

Speaking of Ben, Stephanie would've been the perfect sounding board for his newfound firefighter dreams. She always knew the right thing to say —something that made you think or made you take action. And because she was the level-headed one in the group, she might've been able to convince Ben to confess to Bailey before she found out and banished him to working in the clinic for keeping secrets.

One of the best parts of watching Grey's season after season is watching the attending-resident mentorships develop. Both unapologetically fearless, Stephanie was Amelia's protégé. And, with so many things happening to Amelia this season, fans can only imagine how differently things might have gone with the tumor removal storyline this season had Stephanie been there. Even afterwards, Amelia just seems so... alone. Without Stephanie, there's no one else at Grey's Sloan on her level, who's just as into taking risks — tumor or no tumor — like she is.

While it sucks to watch another doctor walk out of Grey's Sloan, I'm happy that we were able to watch Stephanie for those incredible five seasons. And though fans will miss her fast-talking rants in the resident's lounge, there's always a chance she'll return. Lucky for us, Stephanie was not given the kiss of death other characters have gotten (cough, Derek, Lexie, Mark, etc.), which means the operating room door is always open. And I'll be patiently hoping for a day she possibly returns and Jackson realizes that she's the true love of his life. (Oh, yeah. I'm still mad about him running off from her at April's wedding.) But, for now, I'm just glad to have had the chance to see Stephanie on screen, and her departure is just the start of new, exciting things for Hinton's own career — and that will certainly be a real life success story to watch.