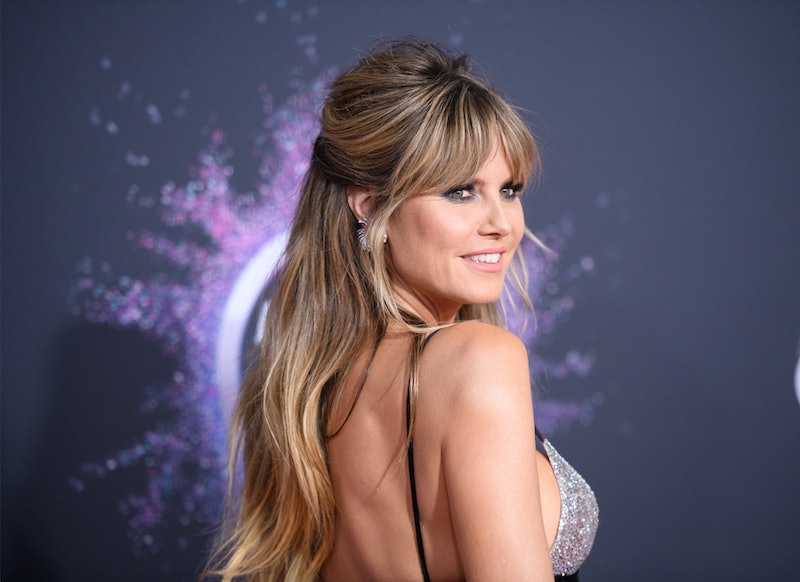 In Bustle’s Q&A series 28, successful women describe exactly what their lives looked like when they were 28 — what they wore, where they worked, what stressed them out most, and what, if anything, they would do differently. This time, host and executive producer of Making the Cut Heidi Klum talks about how it was her fearlessness and not her looks that set her apart at 28.

Heidi Klum has been famous for so long that she uses the photo wire service Getty Images as a kind of personal scrapbook. When she answers my phone call, she's scrolling through pictures of herself at 28, trying to remind herself what she was like 18 years ago: married for the first time, walking in a $12.5 million dollar bra for Victoria's Secret, and totally oblivious to the television career that modeling would set in motion.

Klum decides that she wasn't much different from how she is now, at 46 — curious, excited, eager to make you laugh. She credits her continued success to always asking for more than she was offered. At the Laureus World Sports Awards she hosted in 2001, for example, producers wanted a Formula One race car driver to chauffeur Klum to the event in a Mercedes. Klum wasn't having it. "If you guys want me to promote your car, I'm going to be driving, and I drive his booty to the show," she remembers saying. They told her no: It was a brand new car, she'd be wearing heels and a mini-dress, and there were insurance issues to contend with. "I said, either I'm driving the car or I'm not doing it," Klum recalls. "Guess who was driving the car in the end?"

It's exactly that tenacity that compelled Klum to begin interviewing her fellow Victoria's Secret angels backstage for Access Hollywood, a gig she volunteered for when she noticed the models were shy around the regular presenters. "That's how I started in television," Klum says. "I took the mic and just ran with it." That eventually led to her judging America's Got Talent and hosting Germany's Next Top Model and the long-running Bravo hit Project Runway. "There's probably a million other people that are much better than me doing this, but I'm not going to tell anyone that," she says. "I always felt like, I'm just so happy to be here."

Below, Klum reflects on where she was in life and work at the age of 28.

Where were you living at 28?

New York City. I was married to my first husband [celebrity hairstylist Ric Pipino]. I actually had to look on Getty Images [to remember] what I looked like. It was definitely the time of showing midriffs. I was wearing the lowest pants I could possibly find — literally over my pubic bone, and then my stomach was shredded in a crop top. I didn't have an under boob hanging out, but I was never afraid to show what I had, and I always had fun with clothes.

What are your standout memories from that year?

I did Sex and the City. I appeared in a movie called Blow Dry. It was a hairdressing movie, which was funny because I was married to a hairdresser at the time. I threw my very first Halloween party in New York City. I went as Goth me because I thought, you know what? There's no party in New York. How can this be? Especially not a really good dress-up Halloween party. So I said, 'I'm going to take that over.'

Who did you spend most of your time with?

My husband. I was traveling a lot. If I look back, I wish I could've had more fun ... I was always working or I was at home. When people are like, Oh, do you remember this club? Those were the days! I never had any of that because I always had to get up to film or shoot all day. In order to feel strong and powerful, I had to have a clear head and a good body in terms of being healthy and exercising and feeling my best.

Could you enjoy your success as it was happening at 28?

I definitely enjoyed it. I got to be on the cover of Esquire magazine — that was really cool. I wore [Victoria's Secret's] most expensive Fantasy Bra ever made that year. It had the biggest diamond in the middle that you have ever seen. I got to be in the Guinness Book of World Records.

And I always got a lot of joy from entertaining people. When people asked, 'Oh, If you could ever do a part in a movie, what would you want to do?' I would love to be Jim Carrey in a movie. I always wanted to do silly things, you know?

So often in the modeling industry, you hear discouraging stories. It’s reassuring you didn't experience it that way.

When I started, the grunge look was in. I came at the wrong time because everyone was super skinny. Girls really looked like they didn't eat for a whole week, hanging in the corner, they looked like they hadn't slept. Those were the editorials that you would see in magazines. And here I was with curves and boobs and a big smile on my face. It was discouraging to do castings and always get a no, but that's just what you have to deal with. Sometimes you don't get the job. How can you get all the jobs? That's just not reality.

It was such a successful year for you. You didn't worry it could end?

I always thought if this doesn't work out, I'm going to find something else I'm going to do. I still feel like that today. I think if you really want something and you work hard for it, you can still get that. For me, it was castings. I always wanted to do more castings than they were giving me.

What was the thing you wanted most in the world at 28?

Exactly what I was doing at the time. I wanted to be the best at what I was doing right then and there. I'm looking right now at a picture of me walking in the Victoria's Secret show. I loved being an Angel. That was always a dream of mine. I tried to be in that moment and have the most fun and be the best I could be. I'm definitely a planner also, but you can only plan so much, and then you have to actually be where you are. I started learning early how to enjoy the journey of it all.

What's the biggest way that you've changed since you were 28?

Probably my appearance, not so much on the inside, but more on the outside. I feel like I'm still as curious as I was then. The only thing that has changed is really my shell. Even though I've learned a lot of things along the way and people say you get wiser, I don't think I have. Sometimes you're like: I got married, and I'd never do this again. Never. There's no way. I just got married again. I go with my heart always. I go with my impulse and my passion. If I fall on my face again, I fall on my face again, but I live the day as if it's the last one.

More like this
At 28, Rosie Perez Risked Her Career To Stop Playing Stereotypes
By Gabrielle Bondi
At 28, Debra Jo Rupp Was Living A Much Different '70s Show
By Grace Wehniainen
'Bachelorette' Vet Clare Crawley Unveiled 2 Special Wedding Day Accessories
By Stephanie Topacio Long
This 'One Tree Hill' Wardrobe Error Is Going Viral On TikTok
By Brad Witter
Get Even More From Bustle — Sign Up For The Newsletter
From hair trends to relationship advice, our daily newsletter has everything you need to sound like a person who’s on TikTok, even if you aren’t.