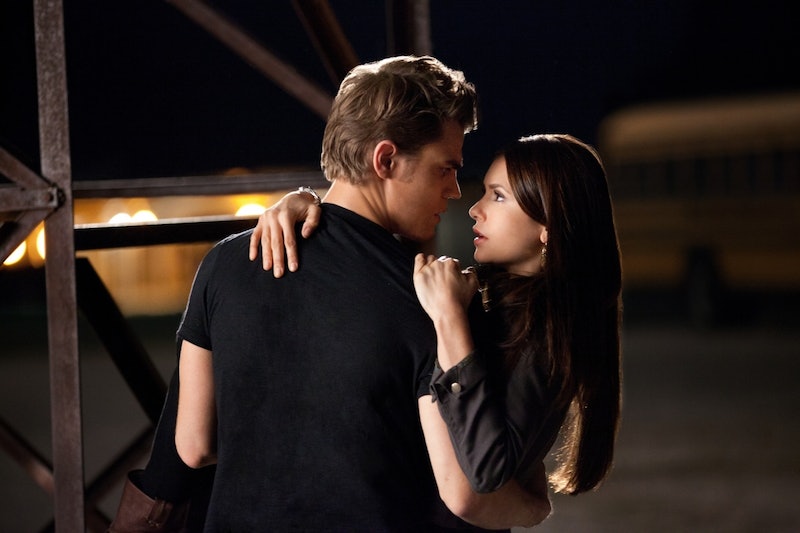 The Vampire Diaries series finale is on the horizon, which can only mean one thing: we're about to find out which ship wins the battle of the endgame: Stelena or Delena. Since it's very first episode, TVD has been focused on the love triangle between Elena Gilbert and vampire brothers Stefan and Damon Salvatore. And, over the course of the six seasons Elena was on the show, the love triangle shifted from a human Elena destined to be with vampire Stefan to a vampire Elena head over heels for vampire Damon. It's been almost four seasons since Elena and Stefan broke up, but I'm still firmly Team Stelena on The Vampire Diaries, and here's why.

At the end of Season 6, when star Nina Dobrev left the show and Elena was put in a temporary sleep, Delena (Elena and Damon) seemed to be endgame. Any hope for Stefan and Elena was long gone, and yet, even now that Stefan is married to Caroline (for the record, I am a huge Steroline shipper), I still can't help but think that Stefan was a better fit for Elena than Damon. I might even go so far as to say that Stefan and Elena are one of my very favorite OTPs (that's One True Pairing, for those not in the know). Here are a few reasons why Stefan and Elena belong together on The Vampire Diaries.

"It's Always Going To Be Stefan"

Before Elena turned into a vampire, she was incredibly secure in her love for Stefan. Call me old fashioned, but I trust human Elena's heart more than that of vampire Elena. Yes, circumstances can change how and who you love, but Elena was so confused as a vampire, her sudden change in affections felt almost like some crazy vamp-delusion. Plus, there's the fact that she was sired to Damon for a while, meaning that her pull towards him wasn't completely natural. I still think of Elena and Stefan's relationship as more pure than her relationship with Damon, and I don't think that will ever change.

As a vampire, Stefan has done some pretty awful things. He's killed people, turned others, and one time, he even terrorized teenage girls at a beauty pageant. But, in all the time we've known him, he's never consciously done anything bad to Elena, at least not when his human emotions were intact. Damon, on the other hand, has done plenty of damage, emotions and all.

Damon killed Jeremy in Season 2's "The Return" right after Elena told him that she was always going to choose Stefan — "It's always going to be Stefan." And for some reason, Elena forgave him. Now, I'm not saying Damon doesn't deserve some measure of forgiveness for his past actions, but killing the woman you claim to love's brother seems pretty unforgivable, even if a magic ring brought him back to life. And Damon wasn't even operating with his human switch turned off at the time! He just killed Jeremy because he wanted to. And that's not the only bad things Damon has done without being emotion-free. In Season 1, he compelled Caroline into being his walking blood bag and girlfriend, and he was more than happy to kill Caroline and Tyler when they turned in Season 2.

Damon with his human emotions is almost as volatile and dangerous as Damon without his human emotions, which is pretty scary when you think about it. In contrast, Stefan is only really dangerous when he's in ripper mode. I'll admit, it's not his most attractive quality (mass murder is rarely a good look), but most of the things Stefan has done to hurt Elena were done when he wasn't himself. Unfortunately, Damon can't say the same.

I know The Vampire Diaries doesn't take place in the real world, but it's worth noting that in reality, if all of your friends don't like your boyfriend, and even one of your greatest enemies thinks you're making a mistake, you might need to rethink your choices. When Elena first began wavering between Stefan and Damon, her BFFs Bonnie and Caroline were both firmly against it. You don't always need to do what your friends tell you to do, but if your best friends object to your love life, it's a red flag. And the fact that Klaus also deemed Stefan and Elena's love to be pretty epic just makes that red flag even bigger.

Stefan changed Elena's life forever by coming to Mystic Falls, and not just because he brought a certain amount of vampire death and destruction with him. Through her relationship with Stefan, Elena healed from the death of her parents, grew more independent, and opened up. Does she have more fun with Damon? Maybe, but does that really outweigh the epic-ness of Stelena? The answer is no, it does not.

Watching The Vampire Diaries series finale, I'll be proud to say I was a Stelena fan until the very end, no matter what happens. And, if Delena is endgame, then I won't be too sad. That's what fan fiction is for.