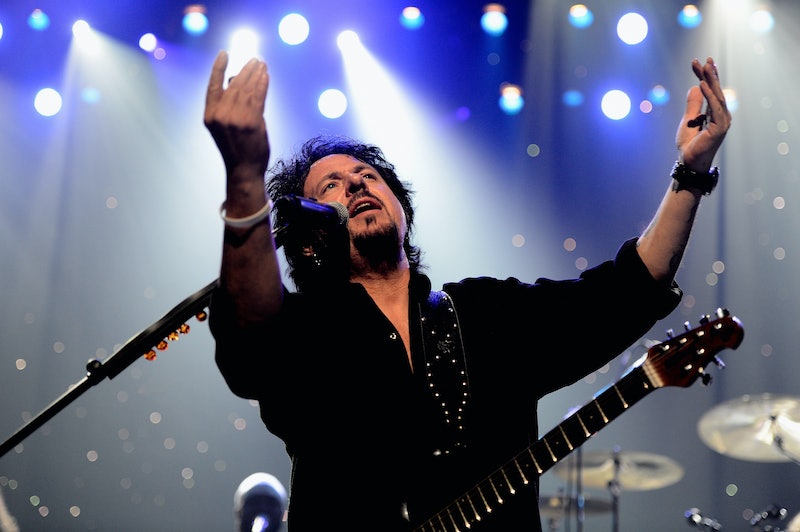 Somewhere in the world right now a dancefloor is being flooded with people because "Africa" by Toto just came on. "Dun, dun, dun, dun, dun, dun, dun." When it comes to hyping up a crowd, the song's bridge is the best in biz (surpassed only by The Killers' "Mr. Brightside," perhaps). But how did we get here? It's not always been like this, y'know. "Africa" has gone through an uncommon phenomenon, becoming more popular than ever decades after its release. But why? I want to know what still makes "Africa" by Toto a big deal in 2019?

When I saw that, on Jan. 14, the Namib desert was being "blessed" with a sound installation that would play Toto's "Africa" on an eternal loop, as the BBC reported, I stopped in my tracks. While the song peaked at number three in the UK charts back in 1983, according to The Official Charts, it has now become what the New York Post dubs the "millennial frat anthem." Speaking as a millennial who wasn't fortunate enough to live through the '80s, I can say with confidence that, yes, this title holds water for me.

"Africa" has experienced a similar kind of resurgence to the one Journey's "Don't Stop Believin'" experienced in the late '00s. While everyone knows that the latter's comeback can be put down to Glee's interpretation of it, it may surprise you to hear that "Africa" has also benefitted from some unexpected covers. Weezer in particular brought the song into the memeosphere when they covered it in May, 2018, according to NME. The appearance of "Africa" in many high-profile TV shows, including South Park and Stranger Things, as Motherboard reports, can't have hurt the song's chances of a comeback either.

Despite the low-key mockery of "Africa" on the internet, it resurgence is down to other, more earnest reasons too. As Ben Lunt, the executive digital director at ad agency BMB, told Motherboard, what "Africa" boasts is "a genuine nostalgia of people of [his] age, and a borrowed nostalgia of younger people." Lunt told the magazine that he thinks the younger generation may enjoy the song because their parents played it when they were kids. The song has "that tie-back to your childhood that makes you feel safe,” according to Lunt.

New Yorker writer Jia Tolentino certainly experienced that feeling of safety when she "followed a link, which someone had shared on Twitter, to a YouTube video that featured the studio recording of Toto’s 'Africa,' edited to sound as though it were playing in an empty mall." Isn't the internet a wonderful thing?

"Oddly, listening to Toto’s 'Africa' in a mall seems to trigger some fundamental human emotion," Tolentino wrote, before going on to say: "Hearing a song you love when it’s playing from elsewhere is a reassuring, isolating experience: you feel solitary and cared for at the same time."

It's worth noting that the song's nostalgic value may have shielded it from criticism that songs with similar themes have faced. Band Aid's "Do They Know It's Christmas," for example, is often called out for its patronising undertones. Some of the observations made about the the "Do They Know It's Christmas" — such as Guardian writer Bim Adewunmi's comment: "There exists a paternalistic way of thinking about Africa, likely exacerbated by the ... Band Aid singles, in which it must be 'saved,' and usually from itself" —could easily be ascribed to Toto's hit also, but the condemnations are far more scarce in this case.

That's not to say that they don't exist, however. While listening back to the song for a 2018 NPR show, journalist Ailsa Chang and music reviewer Rob Harvilla refer to the track's music video as "Westernized" and a "racist fantasy of Africa." The only defence that Harvilla can muster is that the song is at least "honest about what it is." That is, "a very cheesy, synth-driven song, you know, about a white person singing about Africa despite never having been to Africa."