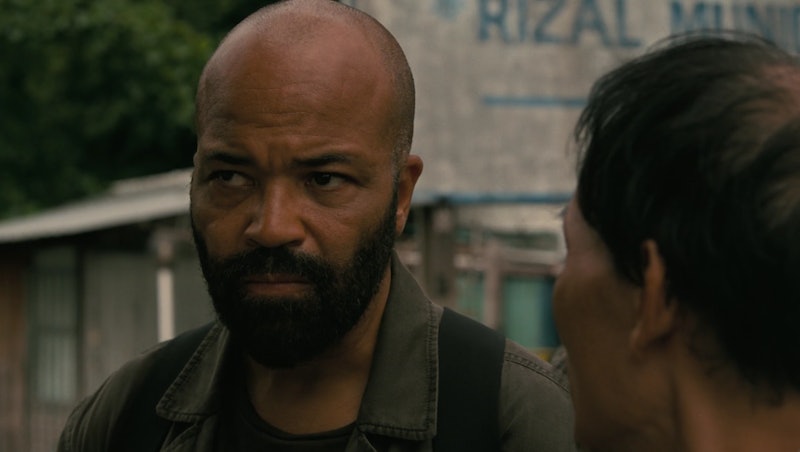 Spoilers ahead for the premiere of Westworld Season 3. In the Westworld Season 3 premiere, we learned that a now-sentient Bernard has been living a free life outside the confines of the park (albeit under an assumed name). So why on earth is Bernard now going back to Westworld instead of running in the opposite direction?

According to Bernard, it's to find "a friend" — or so he tells the boat driver he tracks down in a province in the Philippines and asks to bring him back to the park. It's possible that Bernard is looking for Dolores in order to put a stop to her apparent plan to take down humanity (although as we know, she's now in Los Angeles). But more likely, he's looking for someone who can help him do so. "Something very bad is coming for you all. Something I don't know how to stop. She's had months to plan. I'm alone, and I can't trust myself. Without someone to help me, I can't stop her — I can't save any of you," Bernard tells his coworkers after they figure out his true identity and confront him.

Who could possibly help to diffuse such a seemingly unstoppable force like Dolores? Let's weigh the options.

Vulture's Brian Tallerico thinks Bernard is headed back to Westworld to find the Man in Black, though he doesn't explain the reasoning for that thinking. William knows Dolores well, but well enough to stop her from eviscerating humanity? It feels unlikely.

We know from the end-credits scene that Maeve is currently stuck in a weird, Nazi-occupied Italy part of the park called Warworld. Perhaps Bernard knows that he needs Maeve in order to stop Dolores, as ScreenRant's Hannah Shaw-Williams theorized.

Another option is Ford himself. Yes, the Westworld architect may be dead, but as Reddit user Advaita-Vedanta pointed out, "Bernard is sort of lost without Ford, or the figment of his memory of Ford. Going back to the park to find out clues that only Ford would have left for him seems like a plausible idea." This may, in turn, help him figure out how to beat Dolores at her own game.

Whoever Bernard's mysterious "friend" is, let's hope they're a match for Dolores.