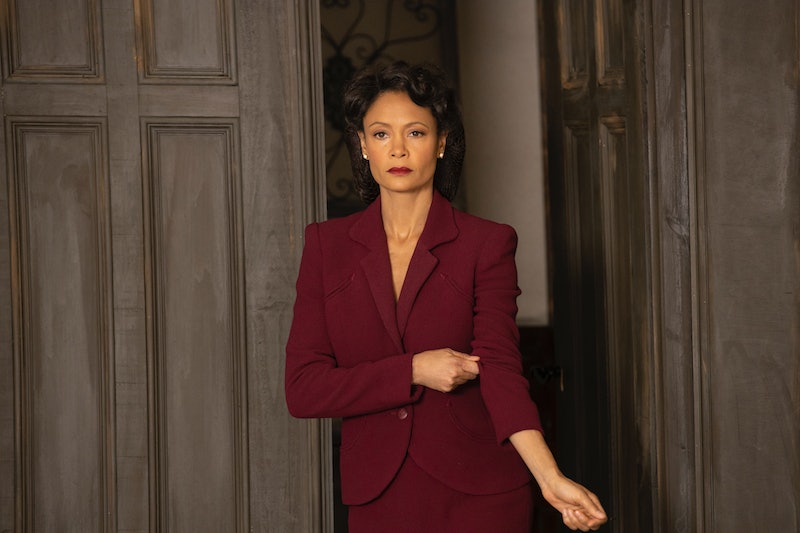 Spoilers ahead for Westworld Season 3 Episode 1. The last time we saw Maeve on Westworld, she was mortally wounded on a stretcher and declining Dolores' offer to put her out of her misery. The post-credits scene of Westworld's Season 3 premiere finally reveals what became of her after Dolores escaped: Maeve's been fixed up and installed in a whole new park. We only get a brief glimpse of where Maeve is, but Westworld's promotional material tells us she's in Warworld, a park designed to look like Nazi-occupied Italy during World War II.

In the post-credits scene, Maeve awakens suddenly in a quiet, classically styled room, sporting coiffed hair, a '40s-era red suit, and a handgun. In the next room there's a dead man on the floor and another bloody man tied to a chair. When Maeve removes his gag, he speaks in German to her, terrified; her bruised knuckles imply that she's the one who beat him. A look outside confirms that she's been given a new storyline and character: beneath her window, bold red flags fly over a small Italian village occupied by Nazi forces.

This is the first glimpse that we get of Warworld, but on Westworld's Delos Destinations — a real website where fans can browse through all the Westworld parks as if they're a prospective guest — there's already a page registered for Warworld. Right now, the page simply says that Delos Destinations "regrets the temporary closure of Warworld" and that they are "undergoing unscheduled maintenance to improve several safety and structural systems, to maximize the experience of our guests" (which is an incredibly mild way to say "sorry, the hosts incited a massacre.") There's not much else on the page, but the image in the background does match up with the scenery Maeve sees when she flings open her window.

Though each park has its own varying levels of difficulty based on the area that the guest is in, we know from Lee Sizemore last season that certain parks, like Shogunworld, are designed for people who find Westworld "too pedestrian." It appears that's the case for Warworld too, and it may even rank above Shogunworld in terms of violence. The assumption is that this particular section of the park was created so that people can live out their Inglourious Basterds fantasies, but the perturbing question is: are guests given the option to play Nazis?

Considering Maeve is a host designed as a woman of color, it does feel like she was put in Nazi-occupied Italy as deliberate punishment, though it's not clear yet who's in charge of decision-making within the parks right now. Maeve is going to need allies, but with Hector, Sizemore, and the rest of her team assumedly dead or located elsewhere, Maeve may just have to puzzle this one out on her own. She's easily one of the smartest characters on the show — bested only by Dolores, and even then it's close — but who knows what forces are now pulling her strings.