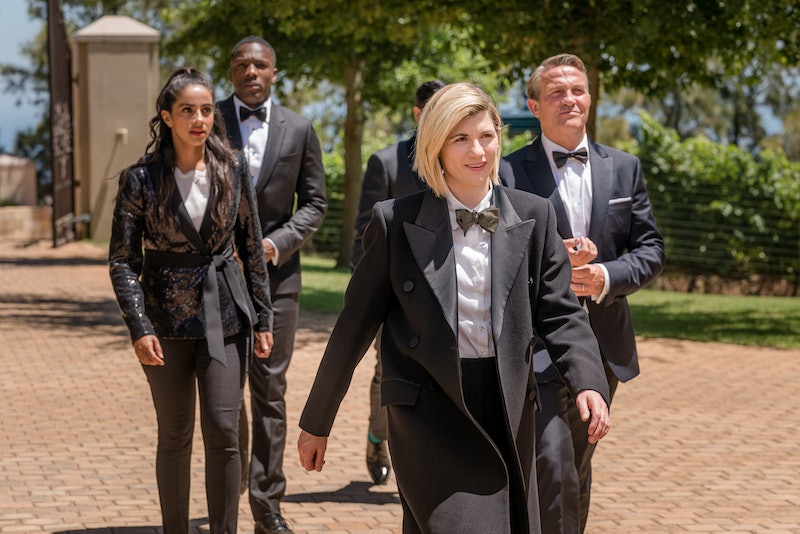 I'm a sucker for puns, and the title of Doctor Who's twelfth series premiere does not disappoint. Premiering on New Years Day with a two-part special, Spyfall will see the Doctor and her companions meet a spymaster (played by Stephen Fry) who sets the team off on a mission to save the planet. So why is the Doctor Who new years' special called Spyfall?

It sounds like a pretty obvious reference to James Bond's Skyfall, but whether it ends up being a parody, homage or some sort of iconic crossover remains to be seen. I mean, can you imagine a cheeky cameo from 007 himself? It's totally unlikely, but Daniel Craig is retiring the Bond name after No Time To Die next year. If there was ever the perfect time for a Doctor Who/James Bond crossover, 2020 is certainly it.

From the trailers though, it seems that Spyfall will be more of a homage to the spy genre than anything else. The crew's sharp tuxedos are a huge clue, along with the thrilling espionage mission they're sent on. Other than that, the Beeb are keeping quiet on what the rest of the two-parter will entail. Although, showrunner Chris Chibnall has given a few hints here and there, including how the premiere is one of the biggest Doctor Who episodes to date.

"We've done quite a lot of foreign filming," Chibnall told Yahoo! Movies UK. "Certainly episode one, I would say, is our most lavish, location-filled, action-packed episode, I think we've ever done." This included shooting in places like South Africa, "and various places across Europe." Chibnall doesn't say much more about the episode than that, but he did provide a little insight into what the twelfth series has to offer.

"We have a big two-part event to open the series I think it's fair to say," he continued. "And that's not the only two-parter in the series. And there are various challenges for the Doctor coming through the series also some returning monsters. We've got the Judoon coming back. We've also got the Cybermen coming back. And we've got some really fantastic scary new monsters as well..."