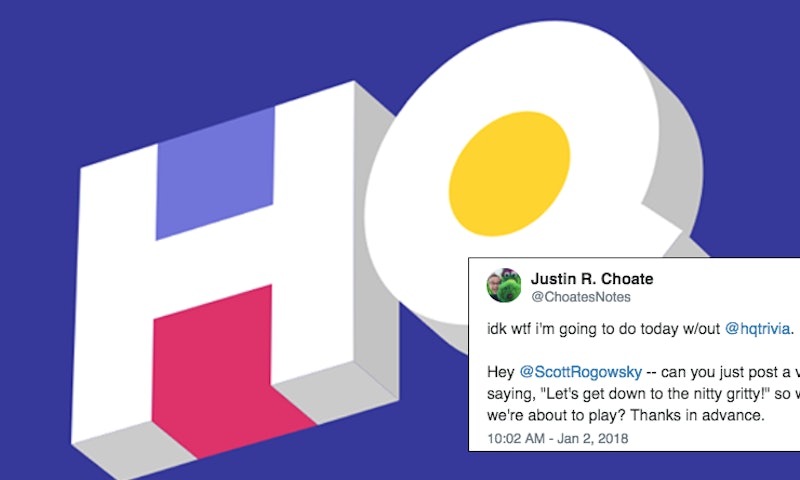 Sorry, HQties: It looks like your favorite app isn't available on Tuesday, Jan. 2. If you're looking at your phone wondering why HQ Trivia is down, there's likely a very good explanation. (Bustle could not reach HQ Trivia for comment.) Around 3 p.m. when the daily trivia usually takes place, instead of a signal to sign on and start the fun, players received a push notification that read: "No games today — we'll be back tomorrow, see you then!"

Yup, HQ Trivia will be back to normal on Wednesday, Jan. 3 at 3 p.m. EST for a $2,000 prize. Sure, it's a bummer, but based on a tweet from the incredibly popular quiz game, it seems to be for maintenance related reasons, as they tweeted, "No games today as we get ahead of the curve."

If you've been playing the past few days, you've likely noticed a bit of a lag, as the amount of players reached more than 700,000 people. That is a ton of people, and the app makers likely need to accommodate for all of them signing on to play. That could definitely explain the "ahead of the curve" phrasing, since it seems like the amount of users has significantly increased over the holidays, as people introduced their friends and family to the frustrating-yet-fun game.

People Didn't Know How To Spend All The Free Time

Clicking aimless at your screen is a totally normal reaction.

A Solid Solution To Fill The Void

Just give the people what they want — their Quiz Khalifa, Quizzie McGuire, or any other quiz-related nickname that Rogowsky has since inherited.

As Rogowsky's tweet points out, HQ Trivia became available on Android devices just before the new year. This could be adding to the increase in players, as well as the app's need to "get ahead of the curve."

Fans Were Missing Their Quiz Crew

Your day just won't feel the same without 10-second questions and banter from the HQ hosts. But don't worry, you won't have to go too long without them in your life. Less than 24 hours away.

And They Used GIFs To Express Themselves

*Casually glances around the room, unsure what to do next.*

And This Person Felt So, So Alone

It's just become such a normal part of people's daily routines, it's hard to go on without it.

The Boredom Is Real

This may be the best GIF use yet.

It's unclear whether this fan was joking... but let's just hope that they were.

In this case, they belong to a GIF version of Spongebob, not a real human.

The Expectations Have Been Raised

If there's no game now, maybe it means that all of the glitches will be miraculously fixed next time. Or in the very least, it could hopefully help cut down on all that lag time.

Some People's Days Were Ruined

This person's day was incomplete without the daily quiz.

Even A Birthday Was Ruined

Hopefully the lack of trivia didn't actually ruin this fan's birthday. But it makes sense if it put a damper on it.

Sure, you're understandably bummed about the lack of a game, but why not use this time off to your advantage? Study topics that pop up on HQ, that way you're all ready to go and get the cash during the next round. It's your chance to make Rogowsky and the other quiz leaders proud. And honestly, the game will be back before you know it.