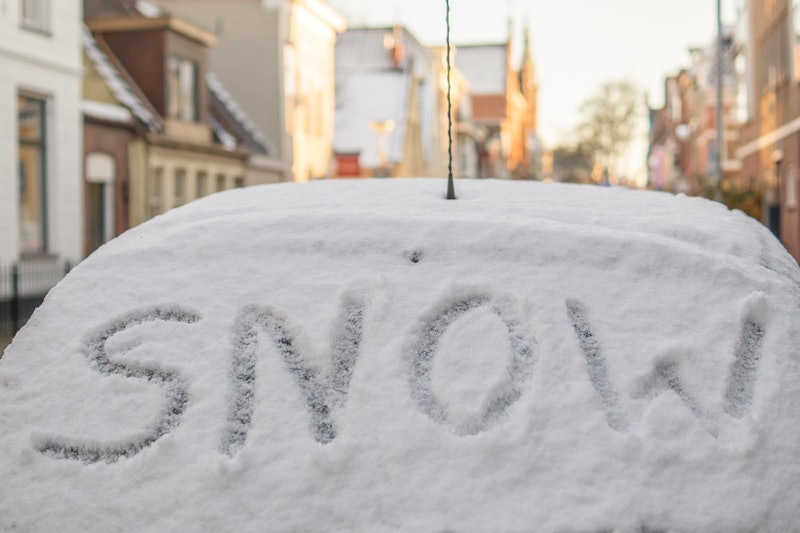 Have you ever wondered how storms get their names? The concept of giving winter storms human names is fairly new, though storms have been named in other ways since the 1700s. For example, "The Great Snow of 1717." So why is this winter storm named "Stella?" While hurricanes have officially received human names since the 1950s, winter storms didn't start getting the same treatment until 2012.

The Weather Channel began using human names for winter storms in 2012 when they dubbed the November 2012 nor'easter "Athena." However, not all winter storms get named. Only storms deemed disruptive enough to cause people inconveniences like power outages, travel disruptions, or threats to public safety are contenders.

According to an article on the news site McClatchy, "The Weather Channel decided to start naming storms after it coined a 2011 event Snowtober, a name that got picked up on Twitter, and in media outlets, and drew more viewers to the site. The channel decided that naming a storm was helpful for those following the storm on social media, and also helped viewers keep track of weather events," Brian Norcross, senior executive director of weather content and presentation at the Weather Channel, said in the story.

However, the new storm-naming system has caused some controversy. According to the article, Joel Meyer, founder and president of AccuWeather, a Weather Channel competitor, issued a statement protesting the Weather Channel's decision.

"In unilaterally deciding to name winter storms, the Weather Channel has confused media spin with science and public safety," he said in the McClatchy story. "We have explored this issue for 20 years and have found that this is not good science, and will mislead the public. Winter storms are very different from hurricanes."

According to the National Hurricane Center, using distinctive names in to identify hurricanes is faster and less subject to error than the older latitude-longitude identification methods of naming the storms. The United States began using female names for hurricanes in 1953 when a new, international phonetic alphabet was introduced. Male names were included in the list beginning in 1978.

In the age of social media, it makes sense to me to name disruptive winter storms as well as hurricanes. There are often several winter storms each week in different parts of the country, and with everyone talking about them on Twitter, it can get confusing. Before we were connected digitally, people likely found out they were in the path of something like "The Blizzard of '78" in their local newspaper, or by watching the news.

These days many people don't subscribe to a newspaper, and some (like me) don't own a TV. In the digital age, it's easy to jump on social media to see which winter storm you need to worry about, for example Stella or Quid, instead of figuring out which of dozens of 2017 winter storms will affect you.

Winter storms names are chosen ahead of the storm season, and similar to hurricanes, are in alphabetical order. According to NPR, a Latin student from Bozeman High wrote to The Weather Channel and proposed using classical Greek and Roman mythology to name winter storms in alphabetical order. The Bozeman High School Latin class has helped name the storms since 2012, though the National Weather Service does not contribute to, or endorse, the names.

"The National Weather Service does not name winter storms, and there are no plans to consider naming winter storms," weather service spokesperson Susan Buchanan said in an email to USA TODAY.

Winter Storm Stella (Latin for "star") is the 19th named storm this season. The name Stella is also related to ancient Greek Saint Alypius the Stylite who was known as the protector of children. A total of 26 names were chose for winter 2016-17. According to The Weather Channel, there has been an average of 25 name-worthy winter storms per year since the naming process officially began in 2012.

This means that hypothetically we could still expect to get hit by storms Theseus (the mythical king of Athens and was the son of Aethra by two fathers: Aegeus and Poseidon); Ursa (a feminine form of the Latin word ursus meaning bear); Valerie: (derived from Valeria, the feminine version of the Ancient Roman saint’s name Valerius); Wyatt (derived from the middle English words for battle and brave); Xavier (derived from name of a 16th century Spanish saint, Francis Xavier); Yuri (comes from the Greek word georgós meaning farmer); and Zeno (derived from the Greek name Zenon, derived from the name of mythological god of the thunder, and the sky, Zeus).

With spring just days away, let's hope Winter Storm Stella is the last storm of 2017 to grace us with her presence. I mean, come on, it's been a rough year already, and I think we're all ready for a little more sunshine.