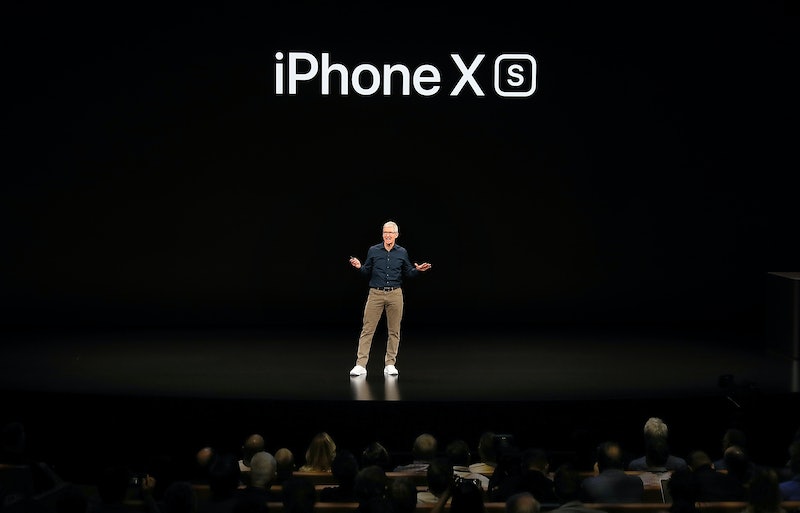 Perhaps the most talked and tweeted about announcement from Wednesday’s Apple Event is that the new iPhone is called Xs. While this new model had a handful of new iPhone features, as per usual, the name itself has a lot of people intrigued...or at least, confused.

What isn’t proving to be quite as simple is getting everyone to agree on its pronunciation. In fact, when rumors about the new name leaked last week, Twitter had some jokes about the iPhone Xs...as Twitter is wont to do. Are we supposed to say it “ex ess”? It is “ten ess”? It is “tens?” Then, of course, Twitter went wild with all the possible wordplay: iPhone “excess,” iPhone “access,” iPhone “exes.”

However, if you’re looking to be a buzzkill and learn how to pronounce iPhone Xs correctly (AKA how Apple would prefer), this latest model is the “iPhone Ten Ess.” Of course, that in itself leads to iPhone “Tennis” jokes. There is no escaping the wordplay.

Twitter was also rampant with “iPhone Extra Small” jokes as well thanks to the iPhone Xs. While the device isn’t notably tiny — apologies if you were hoping for an itty, bitty Zoolander-esque phone — the iPhone Xs happened to be the smallest iPhone announced Wednesday. It’s a 5.8 inch variant of the new iPhone, compared to the 6.5 inch Xs Plus and the 6.1 inch iPhone Xr also announced. However, the phone’s size isn’t any different than previous models.

As you may have noticed, not all of the new phones follow Apple’s typical nomenclature. The iPhone Xs Max, the biggest iPhone revealed, is comparable to previous “Plus” versions. Before Wednesday’s Apple Event, rumors were circulating about whether the phone would be called the iPhone Xs Max or the iPhone Xs Plus. Apparently, “Max” won out. Again, there’s no clear reason as to why Apple shifted from “plus” to “max.” (Perhaps, just to get people talking…)

Regardless of their names, these new iPhones have a handful of noteworthy new features. The camera on the iPhone Xs is being touted by Apple as its “best yet.” One cool feature demonstrated at the Apple Event was the ability to adjust the depth of field of a photo after you’ve taken it. Essentially, if you take a pic where your subject in the foreground is in focus, you can later change the depth of field in editing, bringing the blurry background in to focus as well.

While the iPhone Xs isn’t super tiny, the Xs Max is Apple’s biggest phone yet. Not only is its display larger than previous models, you can opt for a device with an insane amount of storage. There’s the standard 64GB and 256GB models of the iPhone Xs Max. Additionally, there’s a brand new 512GB device capable of holding a whopping 200,000 pictures on your iPhone, in case you have a tendency to fill up your photo storage quickly.

When it was announced last year, the name of the iPhone X also caused conversation. Specifically, no one could agree on whether to pronounce the “ex” or call it the iPhone ten. (For the record, it is the “iPhone ten.”) While you may not pronounce the “ex,” some noted that iPhone X is actually an anagram for “phoenix,” the bird reborn from its own ashes in Greek mythology. Unfortunately, that appeared to be pure coincidence; no “iPhones reborn from their own ashes” in Apple’s product offering.