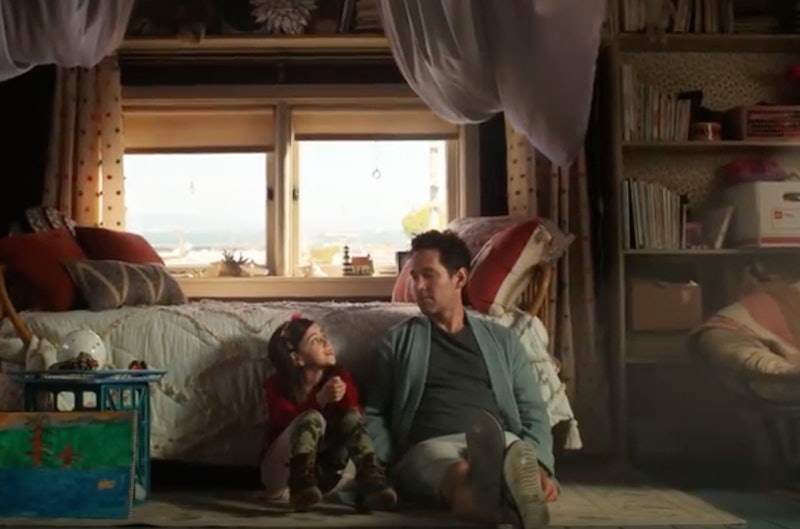 In Ant-Man and the Wasp, the events that transpired in Captain America: Civil War set the scene for the latest adventures of Scott Lang (Paul Rudd) and Hope van Dyne (Evangeline Lilly). Namely, why Scott is on house arrest in Ant-Man and the Wasp is because he joined Steve Rogers' band of Avengers in Civil War, and his superhero group debut came with great consequences. The events at the beginning of Civil War in Lagos, paired with the fallout from Avengers: Age of Ultron, caused the U.N. to establish a panel of members and the Sokovia Accords to oversee and control the Avengers. After signing the Accords, the heroes were supposed to ask for the U.N. panels' permission to use their superpowers for any reason. But... that didn't go so well.

Basically everyone broke that rule in Civil War, including Ant-Man, who joined Falcon, Scarlet Witch, and Hawkeye in attempting to save Bucky from Hydra's mind control. Because the Avengers breached the Sokovia Accords, most of them got captured and detained in the Raft prison. That's where you last saw Scott at the end of Civil War, and it explains why the ex-convict finds himself yet again on probation at the beginning of Ant-Man 2.

Not only did Civil War affect Scott, but it also had significant ramifications for Hope van Dyne, aka the Wasp, and Hank Pym (Michael Douglas). While the Civil War events were going on, Hank and Hope became targeted by the U.N. as well. On the Ant-Man 2 set in Atlanta, executive producer Stephen Broussard told reporters, "Someone knocked on their door and was like, 'You've got to sign this contract because you’re currently in violation of this thing we put in place in Captain America: Civil War,'" adding, "Hank being Hank, he never wanted Stark to have his technology, and said, 'Thanks but no thanks,' and had to go underground. He built this mobile operation, you walk in and it’s huge but when it’s time to go, the whole building can be mobile and move around. It’s got a little handle and squeaky wheels and it’s just fun."

If you're keeping score, that means that both Hank and Hope are on the run from the cops and Scott is supposed to be on house arrest, all because of what took place during Civil War. That situation complicates the heroes' mission to defeat the movie's villain, Ghost, and it also seriously affects Scott's personal relationships in Ant-Man and the Wasp. As you'll remember from the first movie, Hank made sure to warn Ant-Man against working with the Avengers, particularly Iron Man. While Ant-Man didn't exactly team up with Hank's foe, he definitely didn't avoid him in Civil War, either. That creates somewhat of a wedge between the mentor and mentee in the new movie.

"Yeah [Hank's] pretty pissed off about that," Douglas says during Bustle's Ant-Man 2 set visit when asked about his character's feelings on Ant-Man working with the Avengers. The actor laughs and continues, "He really is. That largely sets the initial tone between Scott and Hank. He still looks at [Scott] as not being the right choice for Hope. He's a little judgmental. She can do better."

While Douglas' character may think that his daughter Hope can do better than Scott, that doesn't stop the three superheroes from teaming up together for the first time. Sure, Scott had originally planned to stay out of trouble while put on house arrest, but duty calls, and he can't resist the opportunity to work next to the incredible superhero that is Hope's the Wasp — and her reluctant dad.