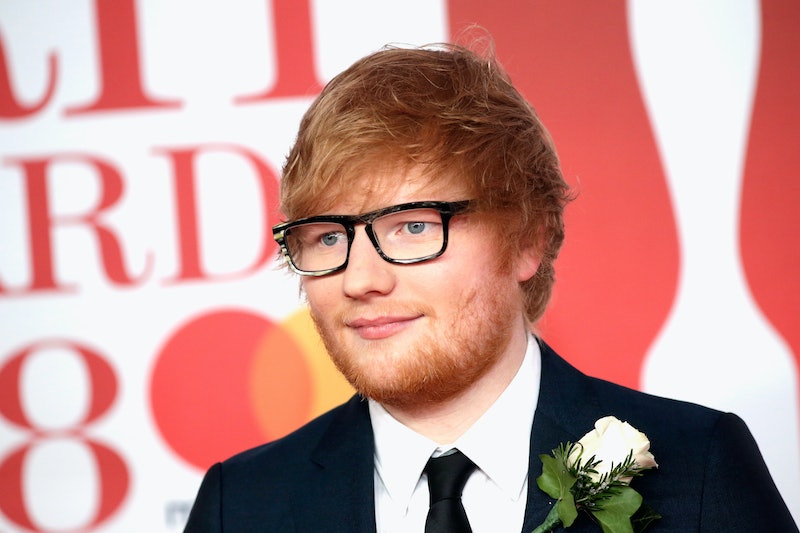 The BRIT Awards are back, and once again the biggest names in music will unite to bring viewers a spectacular live show. The star-studded line-up features the very best British talent, including Little Mix, Jorja Smith, and George Ezra. However, some were surprised to learn that Ed Sheeran was one notable name missing from the list. The "Shape of You" singer had an extremely good night during the 2018 ceremony, but this year the 28 year old is nowhere to be found. So why isn't Ed Sheeran at the 2019 BRITs?

As it turns out, Sheeran has a pretty valid excuse for skipping the 2019 show, because, according to his official website, the UK-based ceremony coincides with the South American leg of his Divide tour. This year, the BRITs — the same night as Sheeran's scheduled tour date in Montevideo, Uruguay. In addition to his sold-out world tour, the "Thinking Out Loud" singer isn't actually nominated this time around, which further validates the hitmaker's decision not to attend — although his presence will certainly be missed. If you'd like to catch Sheeran on his current tour, you're in luck, because the singer will be returning to the UK in August, with huge shows planned in Ipswich and Leeds, reports the Yorkshire Post.

Sheeran is no stranger to BRIT Awards success, and in the past has won awards in the British Breakthrough, British Male Solo and British Album of the Year categories. However, as reported by the BBC, the "A Team" songwriter received his biggest honour during last year's show, when he was awarded the prestigious Global Success Award. The special trophy, which was awarded to Sheeran due to his huge international success, was presented to him by Rolling Stones legend Ronnie Wood.

Another artist who made some serious waves during last year's BRIT Awards was Dua Lipa, who bagged the awards for British Breakthrough Act and British Female Solo Artist. During the live broadcast, the "One Kiss" singer made references to female empowerment, reports Billboard, which was also the theme of her "New Rules" performance on the night. During an acceptance speech, the 23 year old thanked "every single female that’s been on this stage before me that has given girls like me — not just in the music industry, but in society — something to look up to and allowed us to dream this big," and later added "Here’s to more women on these stages, more women winning these awards and more women taking over the world."

This year, Dua Lipa once again dominates the list of nominees, leading the way with four nods. According to the Radio Times, other artists to enjoy recognition include Anne-Marie, who ties with Lipa as the most nominated act of the year, as well as Calvin Harris, George Ezra, Rita Ora, Florence + The Machine, Lily Allen, Sam Smith, and more — but who will win big on the night itself? You'll have to tune in and find out.