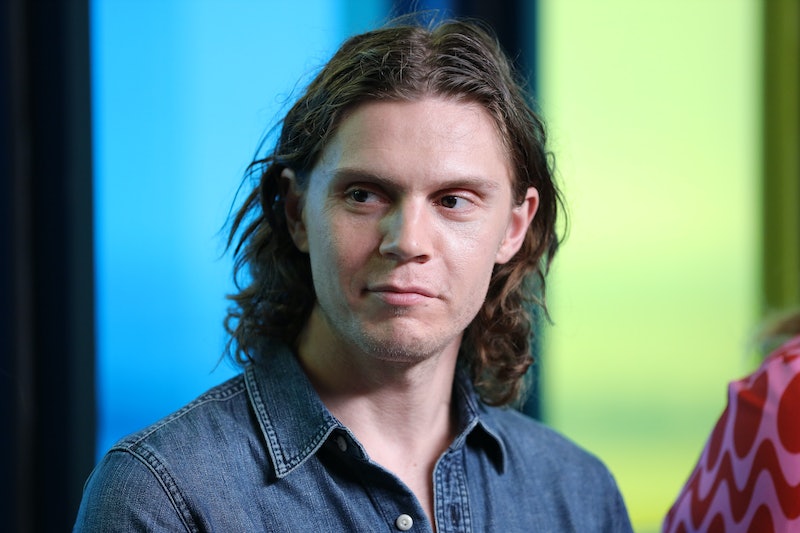 For the first time in the show's history, Evan Peters won't be in American Horror Story this season. That doesn't mean he's done with the series for good, though. When asked if he would be appearing in 1984, Peters told Extra he was "gonna sit a season out," so it sounds like it's just temporary.

As for why he's decided to take a break from AHS, Peters hasn't said much. While promoting his movie I Am Woman at the Toronto International Film Festival recently, he doesn't seem to have addressed his absence — though it's possible he just wasn't asked about it. Peters' social media isn't any more helpful: he doesn't have any tweets, and he pared down his Instagram to only three posts, the latest being from May 2018. (According to fans on Reddit, he's supposedly done this kind of thing before, so it's not indicative of anything bigger going on).

It's worth noting that Peters' ex, Emma Roberts, is in the cast this season, so it's possible he wanted to avoid her, but that's purely speculative: the two were both in Apocalypse last season and haven't said anything about their breakup being the reason Peters isn't in the show.

Something Peters has spoken about is the toll that playing such intense characters on AHS has taken on him, so perhaps he just needed a break to focus on his mental health. "It's been all a massive stretch for me and really difficult to do. It's hurting my soul and Evan as a person," he told GQ 2018 about his roles in AHS and Pose. "There's this massive amount of rage that's been called upon from me, and the emotional stuff that's been called on me for Pose has been heartbreaking, and I'm sick. I don't feel good."

For one thing, Peters said, he doesn't like to scream — something he has to do a lot of on AHS. "I actually hate it. I think it's disgusting and really awful, and it's been a challenge for me," he continued. But more than that, the menacing and often evil characters he's had to play have been emotionally taxing. "It's just exhausting. It's really mentally draining, and you don't want to go to those places ever in your life. And so you have to go there for the scenes, and it ends up integrating it somehow into your life," he said.

For context, this interview took place after Cult, in which he played seven characters including Charles Manson. As AHS creator Ryan Murphy told Deadline, that season in particular was so taxing for Peters, he made sure to gave him a comedic part for Apocalypse.

In fact, Peters told GQ he was done with intense roles altogether. "Yeah, I'm not doing it anymore. I just made a decision. I said to myself, 'I can't do it anymore.' It's not me. It's not who I am!'" he said.

So if he does come back to AHS, it may be in a much different capacity.

More like this
Evan Peters Decompressed After 'Dahmer' By Watching This Will Ferrell Movie
By Grace Wehniainen
It May Be A While Before 'All American' Season 5 Drops On Netflix
By Grace Wehniainen
The 'Kenan & Kel' Reunion On 'SNL' Took A Dramatic Turn, Thanks To Keke Palmer
By Brad Witter
Keke Palmer Just Announced She's "Going To Be A Mom" On 'SNL'
By Brad Witter
Get Even More From Bustle — Sign Up For The Newsletter