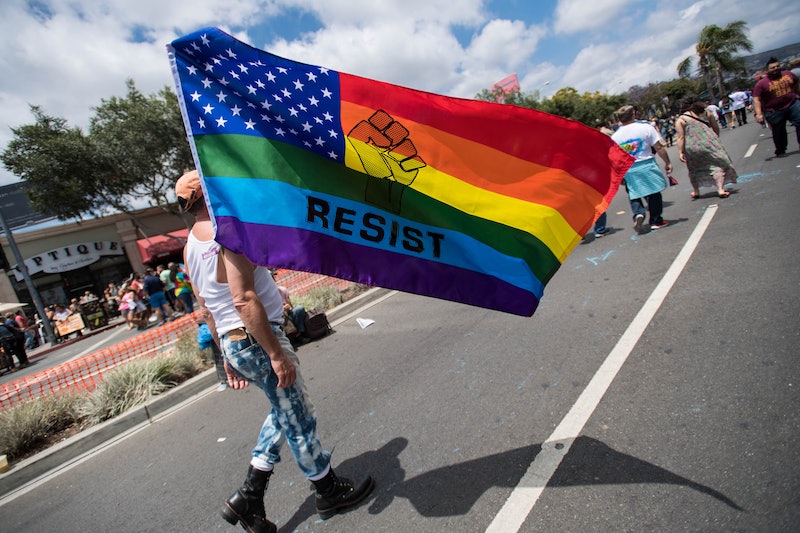 In case you've been living under an un-fun, dark, dingy, rainbow-free rock, June is LGBTQIA+ Pride month, a 30-day span full of opportunities to let your LGBTQIA+ pride and support shine. Whether you celebrate by attending a Pride parade, making a purchase or donation that gives back to the community, creating a piece of public art, or showing your pride on social media, there are countless ways to keep your rainbow bright and proud during the month of June. Several values-forward brands have incorporated Pride month into their programming and offerings for the month of June, and many clothing companies and tech leaders rolled out products designed to help users celebrate all month long. One such platform is Facebook, which debuted a new reaction feature in celebration of Pride month. But, according to Mashable, some users are pointing out that Facebook’s new Pride reaction is unavailable in some countries like Malaysia, Singapore, and Egypt, which have historically been unfriendly to the LGBTQIA+ community (for instance, in 2015, Malaysian Prime Minister Najib Razak compared the LGBTQIA+ community to the Islamic State terrorist group, according to The Huffington Post).

However, it seems as though the feature is not available everywhere because it is still in the testing stages. In a comment to Bustle, a Facebook spokesperson commented, “with regard to Pride, people in major markets with Pride celebrations will be able to use a temporary rainbow reaction during Pride month. They can also like our LGBTQ@Facebook page to access the reaction, however, because this is a new experience we’ve been testing, the rainbow reaction will not be available everywhere.”

Additionally, according to a recent Facebook blog post from Facebook VP Alex Schultz, the feature was never intended to be available universally. Although it’s currently available in countries like the U.S. and Canada, folks can manually enable it if they so choose, and the company explained that the feature is still rolling out around the globe.

Facebook is no stranger to jazzy, seasonal touches. In recent years, it’s added a colored background feature to text-only updates, new emoji reactions, and seasonal and event-based profile photo filters designed to help users celebrate and show solidarity during serious and iconic cultural moments. The new Pride liking feature is one more addition in a slew of culturally attuned add-ons designed to keep users interacting and tuned in to the moment at hand, and many users are thrilled about its arrival.

Per Facebook's comment, it's not clear when, or if the feature will be available worldwide in the future — but for now, it's in the testing phase, so it's still rolling out for users.

For users who can access the feature, it can be acquired by liking the LGBTQ@Facebook page.