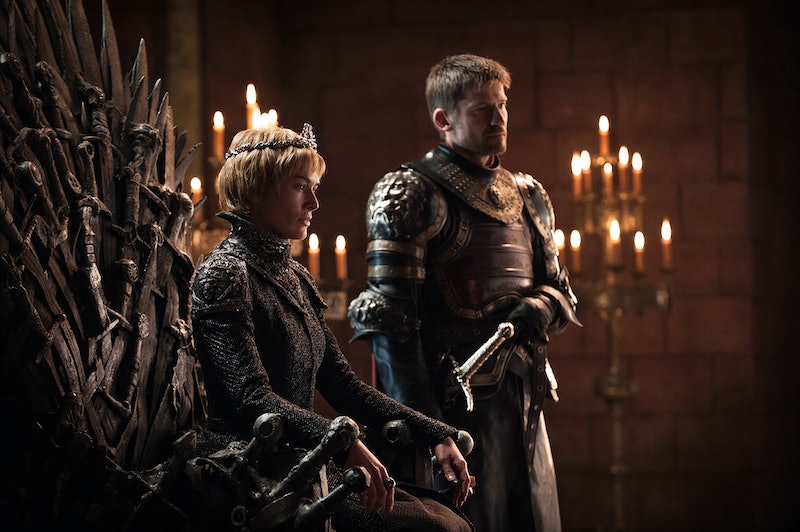 When Cersei Lannister delivers news, it's best to take it with a grain of poisoned salt. So when Cersei told Jaime that she is pregnant during the Aug. 13 episode of Game Of Thrones, "Eastwatch," it was fair — nay, smart — for fans to be skeptical. Jaime, though, seemed genuinely happy to be having a fourth child with his twin, and in a phone interview with Bustle for his new film Shot Caller, actor Nikolaj Coster-Waldau confirms that his character is over the moon about Cersei's news. As for whether or not the news is actually true, though, that's a bit more complicated.

"I think that he believes it," Coster-Waldau says of Jaime's reaction to his sister's announcement. And interestingly, it may not just be Jaime who believes the pregnancy is true; the actor points to Lena Headey's performance when Cersei delivers the news as potential proof that the character isn't lying. "If you look at the scene again, she actually looks happy for the first time in, I don't know, three seasons. She seems to believe it as well," Coster-Waldau says.

The actor also doesn't think that Cersei and Jaime are going to let anyone rain on their parade. "People are so cynical. They're pregnant and so happy cause they're getting a little old," he says. "I think it's a beautiful, beautiful thing. They're bringing an heir to the Lannister family, into the world, such a great thing," he continues, channeling his Game Of Thrones character's mindset.

Beyond that, Coster-Waldau theorizes that Jaime's full of excitement about potentially becoming a dad. "He bought a pram. He's choosing colors for the nursery. He's torn between if he wants a boy or a girl, but I think he hopes for a girl," the actor jokes. Considering that Jaime was with his daughter Myrcella when she died and that Jaime and Cersei already had two sons, Joffrey and Tommen, you can understand Jaime's wish for a daughter once again.

And if you're wondering what's in store for the expectant parents during the sixth episode of Season 7, Coster-Waldau jokes that something very unconventional for Westeros is on the way. "He's so excited. They're gonna have a shower next week," the actor says. "He's already got the — you know the BabyBjörn thing? He's gonna carry the baby around on the front — it's gonna be great." Someone tell me where to find a registry near the Iron Throne. (Although the greatest gift would probably be Maggy the Frog delivering a prophecy that says a child of Cersei and Jaime's won't die.)

But a legitimate reason that Jaime is so delighted by Cersei's pregnancy is that, despite the chaos and war surrounding them, this would be the first time that Jaime could act as a proper father. With Joffrey, Myrcella, and Tommen, the Lannister twins had attempted to keep their children's paternity a secret since they were born of incest and Cersei was married to Robert Baratheon. "[Jaime] has to hide some pretty extreme emotional responses," Coster-Waldau recalls. "He's had kids but he couldn't be open about [it]." But this time around, Cersei already said she will openly declare Jaime as the father, which Coster-Waldau says is Jaime's "dream."

Yet, the actor's optimism for his character is something to be concerned about. If Cersei really is pregnant, as Coster-Waldau implies, she could lose the baby — putting an end to both Jaime and Cersei's dreams. After all, Maggy said Cersei would only have three children and nothing would tear Jaime and Cersei apart quite like giving them hope for another child, only to rip that joy away.

And if Cersei really is pregnant and they lose the baby, she could become more maniacally obsessed with power than she already is (if that's even possible), which could perhaps lead to Jaime fulfilling a popular fan theory. The valonqar theory that stems from the A Song Of Ice And Fire books is that Cersei's younger brother will kill her. Although they are twins, Cersei was born first. So while she believes Tyrion is the one who could kill her in the books, fans have wondered if it could really be Jaime and if this theory will play out on the HBO show.

Although Coster-Waldau had previously said the valonqar theory was too obvious, he seems more open to it now. But as the actor notes, the cast of Game Of Thrones can't reveal any details about upcoming plot points — and that includes the Lannister's potential baby.

If you're still left questioning the legitimacy of Cersei's pregnancy, one thing is for sure: her decision to tell Jaime that she's with child has brought them closer together. And if anything bad were to happen (and it inevitably will), the dynamic between them would shift drastically — and possibly result in a pretty "poetic" death.