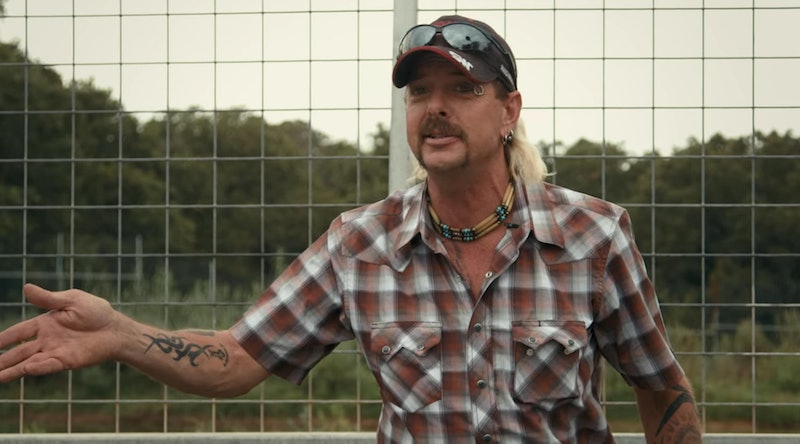 Netflix's hit docuseries Tiger King: Murder, Mayhem and Madness covered a lot of ground in seven episodes, but there's still so much that wasn't included and that is now coming to light. One overlooked aspect of Joe Exotic's story is his racism, which hit Twitter in the last few days. Responding to the criticism online, directors Eric Goode and Rebecca Chaiklin recently explained why Joe Exotic's racism wasn't in Tiger King.

"Yes. Joe is a racist, I would say categorically. He said things when we were filming that were very unsettling," Chaiklin told The Hollywood Reporter after the publication brought up footage that has surfaced of Exotic using ignorant language, specifically the "N" word. As shared by TMZ on March 31, in a video from 2015 Exotic complained about not being able to use the "N" word and went as far to call it "discrimination" that white people can't use the word in comparison to people of color who do. The clip quickly went viral on Twitter.

After being asked why they didn't include his racism in Tiger King, Chaiklin explained, "They didn’t have a context in the story, but he has a lot to learn. I think most of it was ignorance and not having a lot of exposure, and I think he even evolved over the course of the time that we filmed."

Goode added that even though there is "empathy for Joe" he's not a stand-up guy. "Joe committed some really serious crimes and Joe was not only cruel and inhumane to his animals, he was cruel to the people around him," Goode said, before explaining that Joe is very much an "actor" and "tells people what they want to hear." Even Goode admitted that he found "some empathy" for him and described him as an "incredible character." But he also made clear that his intention was not to glorify or defend Joe Exotic's actions. (Exotic is now serving 22 years in prison for endangering wildlife and allegedly attempting to hire two hitmen to murder Carole Baskin.)

When it comes to filming a docuseries, filmmakers can't include everything they capture. Exotic was by no means portrayed as a hero in Tiger King, but his racism also defines who he is as a person. Maybe the racist remarks should've been added, but then again, there was probably a lot about Exotic that Goode and Chaiklin didn't include. If Tiger King gets a second season, let's hope we get more insight into Exotic, even if some of the content continues to be difficult to watch.

More like this
Shaina Explains Why Natalie’s 'Love Is Blind' Text Claims About Shayne Have “No Validity”
By Grace Wehniainen
Here’s Everything Coming To & Leaving Netflix In October
By Jake Viswanath
Netflix's 'Bling Empire' Season 3 Trailer Includes A 'Selling Sunset' Cameo
By Kadin Burnett and Sam Ramsden
What’s New On Netflix: Ana De Armas’ 'Blonde' & A Nick Kroll Special
By Arya Roshanian
Get Even More From Bustle — Sign Up For The Newsletter