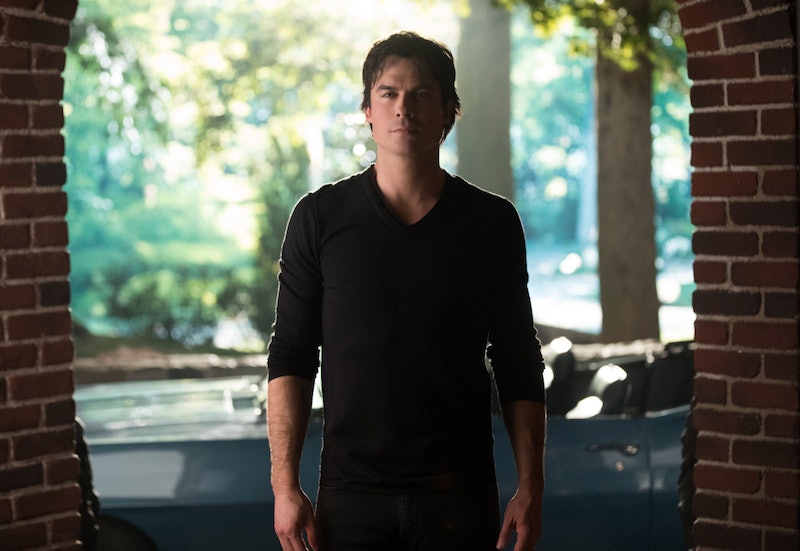 It's next to impossible to talk about The Vampire Diaries without mentioning its incredibly passionate fanbase. Over the course of eight seasons, The Vampire Diaries has redefined what fandom means. From talented fan-made art and music videos shared via social media to the rabid (and sometimes quite toxic) "shipper" wars between "team" members supporting all the show's different relationships, The CW's long-running vampire series became an unstoppable pop culture movement. The show may be coming to an end when the series finale airs this Friday at 9 p.m. on The CW following an hour-long retrospective special, but the legacy will truly live on in the hearts (and tweets) of its fans.

Back in the first days of the show, the show began with a classic premise: boy meets girl. Boy falls in love with girl. Girl finds out that boy is a 161-year-old vampire with a dangerous older brother, also a vampire, hellbent on ruining the boy's life. And yet, against all odds, the show became a love triangle between the two Salvatore brothers, the good guy vampire with compassion Stefan (Paul Wesley), his older, psychotic, serial-killer vampire brother Damon (Ian Somerhalder) and the girl of their dreams, Elena Gilbert (Nina Dobrev). That love triangle inspired the shipper war to end all shipper wars as fans took sides: Team Stelena and Team Delena.

But TVD creator and showrunner Julie Plec never thought the fans would love and root for Damon as much as they have over the years.

"The thing [co-creator] Kevin [Williamson] and I never anticipated, and you can't really anticipate it, is just how much the character of Damon Salvatore would pierce his way into the hearts of the fans," Plec tells me over the phone as she looks back on the long run of TVD. "He's such a hateful, awful, evil, nasty guy. People just loved him."

After pausing to laugh, Plec continues, "Obviously we knew we were writing a character that you could love to hate, who would go on a redemptive journey over the course of eight years. But the speed and intensity with which audiences started clamoring for him to get his happiness in spite of his behavior was really surprising and wild to experience."

The intensely loyal adoration from fans caught Somerhalder by surprise too.

"A man who might be 170 years old but looks 23, well now looks about 60, can be so very flawed, can be so very malicious, so very selfish, so very just mean, but shows a vulnerability and a little bit of humor and an audience will embrace that character in such a profound way," Somerhalder says. "With Stefan too. But I had never seen anything like it where humanity, the grotesque things that this man did, that people consistently made excuses for him. It was wild."

One of the show's standout moments came in the Season 2 premiere when, after kissing Elena, Damon lashes out at her rejection by killing her younger brother Jeremy (Steven R. McQueen). It was hardly the first time Damon did something truly terrible as a result of bad news or something not going his way, and it would hardly be the last.

"I mean, Damon could have walked into an orphanage and literally in cold blood kill like 20 orphans and people would still say, 'Well, he was really upset about Elena,'" Somerhalder says with a laugh. "But I'm serious! I still can’t quite understand it but I'm glad that I was there for that ride and I take that with me and I soak it in. It's very special."

Looking back over the course of all eight seasons, there have been some creative highs and unfortunate lows throughout the larger TVD arc, but Plec doesn't have any desire to go back and change any twist or storyline.

"You learn from your mistakes as much as you get to pat yourself on the back for the things you did right," Plec says. "So I wouldn't change anything necessarily. I have regrets for stories we didn't get to tell, probably, but nothing that makes me feel like we took a left turn that we never recovered from."

For some of the show's cast like Somerhalder, Wesley and Zach Roerig, the first time they all realized just how big of a hit TVD would become was when they were watching the Season 1 episode "Lost Girls" together in Wesley's apartment. That realization came a little later for Plec.

"There's a lot of little moments where I felt like the affirmation from either the critical community or the fan community was positive enough where I felt like we were doing a good job," she says. "But I think I felt like I could breathe and relax into a confidence about our survival in Season 3 when a couple episodes into the season, our ratings started to go up, which doesn't really happen very often. That was a nice moment of relief that we would probably be here for a long time."