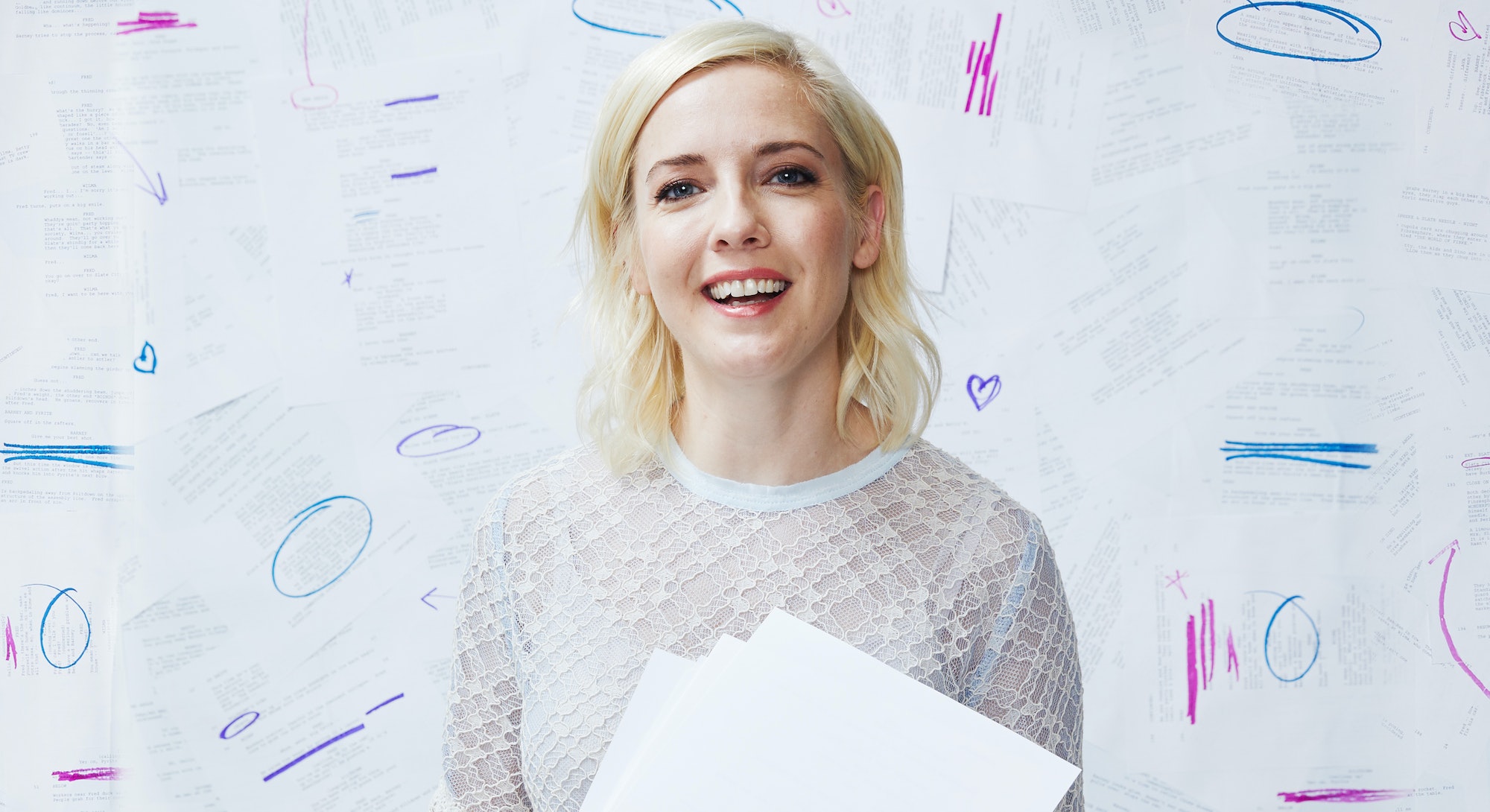 When it comes to fictional female TV and film characters, a lot of them, put simply, suck. They can be stereotypical, tired, and sometimes even offensive. After all, not every woman or girl on screen can be Olivia Pope, Leslie Knope, a Gilmore woman, or Stranger Things' Eleven — but they should be. And with so few women writing screenplays that reach the masses (they made up only 13 percent of Hollywood's employed screenwriters as of January 2017), it's important the chosen few write characters who aren't, well, lame. Luckily, Katie Dippold — whose screenwriting credits include the likes of Parks and Recreation, The Heat, Ghostbusters, and 2017's Snatched, all featuring hilarious, complex female characters — has a few ideas of how to bring funny and nuanced women to life on screen.

"There's a part of every character I write that I either aspire to be or I hate about myself. There's always something that I connect to in a way," she says, sitting across from me on a velvet couch in a converted warehouse in East Los Angeles.

...you have to shake off what you've seen on television and film and go, "OK. What do you just wish to see?"

To put it another way: Write what you know. It's a well-known, perhaps fatigued, piece of advice, but for Dippold, it rings true. She says that all of the characters she writes, many of whom are praised for depicting the realities about women not often seen onscreen, are inspired by real life people — to a certain extent.

"One of the producers of Ghostbusters is one of the most awkward huggers of all time. She always goes for a handshake, then it becomes a hug, and she'll end up kissing your neck or something on accident. We added that to Kristen [Wiig]'s character," she says, curling her legs up onto the couch.

Writing well-rounded, believable, funny female characters seems like a no-brainer, and for Dippold it is, but this writer's past gives her a particular impetus to breath life into the women she puts to paper.

"A lot of this for me stems from real life... resenting things that are assigned to me because I'm a female and not understanding why those attachments exist..."

she says. "In high school, the boyfriends would go do something really fun and the girls would stay home, sit around, gossip, maybe bake brownies. The boys would drive to Atlantic City and have some crazy, exciting, fun time. They'd come back laughing and have all of these ridiculous stories."

Dippold felt understandably left out of the fun: "For me, it's a lot of fighting those norms."

"A lot of this for me stems from real life... resenting things that are assigned to me because I'm a female and not understanding why those attachments exist.."

Dippold doesn't appear to be a wallflower, but she does seem a little uncomfortable in the limelight. Before our chat, the screenwriter poses for photographs in front of a backdrop crafted out of old scripts. She's willing and game to try different poses and concepts — like being showered with torn up screenplays. But while other celebrities blossom in front of the hot lights — their moment to shine — Dippold seems eager to get to the interview portion of her visit.

The writer, who is now known for those aforementioned adventurous, independent, often quirky female characters — like Ghostbusters' Holtzman (Kate McKinnon) and The Heat's Mullins (Melissa McCarthy) — didn't always lead a life the characters she creates would approve of. Specifically, Dippold once felt like her happiness was dependent on having a boyfriend — unlike almost all of her big screen creations.

"I was desperate to find this cool boyfriend that would answer everything. Once I started having boyfriends, I still felt a little depressed all the time. It wasn't until I was in college and I started doing comedy that I started feeling like a full person," she says, turning her body towards me a bit more.

And this misconception — that a partner will fill a void, or be the answer to one's unhappiness — was fueled by (you guessed it) the female characters she saw on screen. "We grew up with so many movies where it's about getting engaged, but I've never, ever had that goal. If people get married, that's wonderful, but I just feel like it's so important to be completely whole in yourself before you could possibly have a good relationship," says the screenwriter, adding that in high school, "I just always felt a little sad all the time."

This reaction to female characters onscreen isn't just a Dippold thing. According to the Motion Picture Association of America, women make up 52 percent of movie goers, which means a lot of women see the characters that Hollywood turns out. Perhaps, this would improve if the group of people crafting the stories we see on screen were also at least 50 percent female; but instead the same organization reports that women represented just 11 percent of writers of the top 100 grossing films of last year. Alas, inequality in Hollywood, behind and in front of the camera, is a known reality. So when Dippold started writing for TV and film, she saw a real opportunity to change the experience of 52 percent of moviegoers by changing the way women are portrayed. Yet, years of practice and dedication aside, Dippold admits that doing so isn't always easy.

"You're so used to what you see. It was hard for even me to write a movie starring two women," she says of Snatched, starring Goldie Hawn and Amy Schumer. "I know that sounds crazy, but you have to shake off what you've seen on television and film and go, 'OK. What do you just wish to see?' I just thought those women were comedy powerhouses," and yet, "it turned into a whirlwind of debates."

It's hard to forget the unfair controversy that followed 2016's Ghostbusters. The trailer became the most disliked trailer in YouTube history, and some men even claimed the all-female iteration "ruined their childhood." Understandably, this was a lot to bite off for the woman who wrote the film alongside Paul Feig.

In fact, Dippold felt so much stress surrounding the film's discourse that she promptly got shingles. "Yes, shingles! The thing that is usually saved for 90-year-old ladies with no immune system. I felt a little bit powerless. I knew it was going to be judged so much. It was the ticket for my body to be like, 'Oh. Here's your shingles.' So I often have to be reminded to just focus on the work, and it [usually] pays off."

Shingles and all, Dippold is resolute in her commitment to her craft, and in turn, working to offer increasingly better female characters for generations to come. "My hope is that kids grow up watching something different than what we were watching. There's no reason for women not to be in on the shenanigans."

With so many lame female (and let's be honest, male) characters taking up valuable space on our screens, audiences could use a heavy dose of Dippold, and all those writers crafting well-rounded women like her, in the years to come. Or, you know, like yesterday.