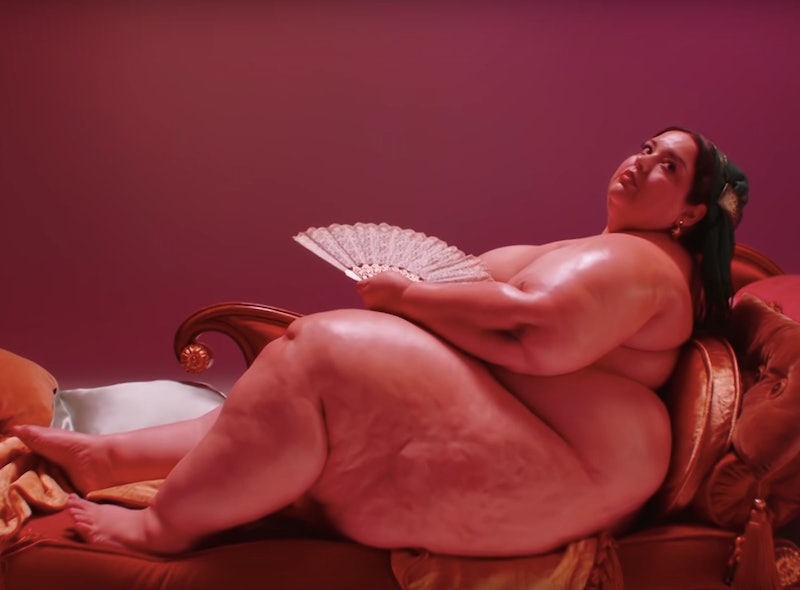 Only 27 seconds into Miley Cyrus' new video "Mother's Daughter," viewers are treated to a cameo by Angelina Duplisea. Duplisea, an actor, model, and self-described "professional fat shaker," as noted on her Twitter, sits on an elegant chaise lounge; she is Venus-like in her magnificence. Holding a folding fan in one hand, her cherubim face peaks over her shoulder as the camera zooms closer and closer into her unapologetically visible, imposing fat body.

To say that viewers are "treated" to Duplisea's appearance is no understatement. Emboldened fat people are a rare sight to behold in mainstream media, let alone emboldened fat people in the nude; fat people not being robbed of their sensuality, sexuality, personhood, womanhood, or general validity.

There are exceptions, to be sure. Lizzo, Tess Holliday, Joy Nash, and Danielle Brooks are among those disrupting the dominant cultural narrative surrounding fatness and the value of fat empowerment, and doing so with massive followings and mainstream attention. They are exceptions to the rules, though. They are fighting for visibility across industries that would, by and large, still prefer they remain invisible.

As for "Mother's Daughter," it has been viewed over six million times in just 24 hours, while Cyrus has over 92 million followers on Instagram alone. By including Duplisea in the video (alongside women and femmes of diverse body shapes, abilities, and experiences) and even more notably, sharing Duplisea's words on fat acceptance on her own Instagram, Cyrus is undoubtedly helping expose more people to the notion of fat liberation. One can only hope that, due to some of the subsequent reactions both Cyrus and Duplisea are now facing, more people will understand the need for fat liberation as well.

Unsurprisingly to most fat people, it didn't take very long for fat-shaming rhetoric to disturb what should have simply been a joyful moment. After Cyrus shared Duplisea's image on her personal Instagram, all manner of customary, but no less harmful, fat-phobia hit the comments.

"Glamorizing an illness is not okay," one user wrote. "This isn’t body positivity. This is someone showing their body hate and neglect," another claimed. "This is like promoting cigarettes." For every comment thanking Cyrus for showcasing diverse manifestations of feminine strength via all of the individuals who appear in the video, and all those specifically thanking the musician for including Duplisea, there are just as many, if not more, full of abuse.

The irony is that Duplisea herself predicted these toxic reactions. "Social media's accessibility allows us to peek in on others living their lives, but too often the conversation turns negative when there are fat bodies involved," she captioned her cameo photo on Instagram. "People just love to leave awful comments on fat folks' photos in order to feel superior and I promise you, not one of these commenters actually cares about the health, family, environment or whatever bullshit reason they give for their vile behavior towards a fat person. And really, how in the hell does health matter in the context of someone just posting a photo of themselves feeling happy and confident? (HINT: it doesn't matter, stop pretending like it does.)"

She also shed a light on the still-radical ideology of fat acceptance.

"Fat acceptance is based on the notion that all fat people, regardless of health, deserve respect. And it's a battle that is fought every day by thousands, including myself. Stop it and do better! We humans have a lot to learn, but we can start by fighting our personal biases and permitting people of all genders, races, sexualities, sizes, abilities, and health levels to live harassment-free lives."

While casual references to "body positivity" have been made in shows like Queer Eye and Atypical, this is arguably one of the rare times that "fat acceptance" has made it onto such a major platform. The distinction is an important one, as "body positivity" in 2019 often refers to the value of self-love and self-care on a personal level, while "fat acceptance" refers specifically to the fight against the grander, often systemic marginalization of fat bodies.

Alongside the appearance of the term itself on this occasion, voiced by Duplisea and further shared by Cyrus, we can also observe its necessity. Whatever one's personal opinion of Cyrus might be (she has been nothing if not a divisive figure for some time now), she unleashed something of a power anthem through "Mother's Daughter." She included queer femmes and breastfeeding moms and trans women of color and fat women alongside words on feminism, virginity, beauty, and bodily autonomy. And amidst it all — in one of the earliest scenes within the video — there was Duplisea. She was strong and beautiful in a moment that should have been cause for celebration, but that was instead met with vitriol. As is always the case when fat people dare to break expectations.

And therein, perhaps, lies the power of a cameo like Duplisea's ... her beauty, strength, and power disrupt the dominant narrative.

In the same Instagram caption promoting "Mother's Daughter," Duplisea makes a request of those who feel it appropriate to ridicule, belittle, or otherwise shame someone on the basis of body size. It's fairly simple, in theory: "Next time you see a fat person posting pictures of themselves living their life, stop and ask yourself why you wish to spoil their joy. I guarantee that you can't come up with a valid reason that isn't based in your own ego gratification."

The trouble is that, for a lot of people, this apparently isn't a simple request at all. For many, the idea that they actually don't have the right to condemn fat individuals is preposterous. Of course it's within their rights: fat people are an "epidemic," after all. Fat people are "ugly." Fat people are "burdens." Fat people aren't really people — and cannot be, unless they lose the weight.

And therein, perhaps, lies the power of a cameo like Duplisea's in a video that will no doubt continue racking up views: her beauty, strength, and power disrupt the dominant narrative. Her words on fat acceptance fuel the fat flame. Even if only for the three minutes and 41 minutes it takes to watch "Mother's Daughter," or the minute and a half it takes to read the caption on Cyrus' Instagram (or to check out the comments beneath it), the value of fat liberation is heard, seen, and considered just a little bit more. And perhaps, out of all of those millions of people coming face to face with the alternative narrative (some perhaps for the first time), a few will experience the beginnings of a shift — maybe even the beginnings of a fight.