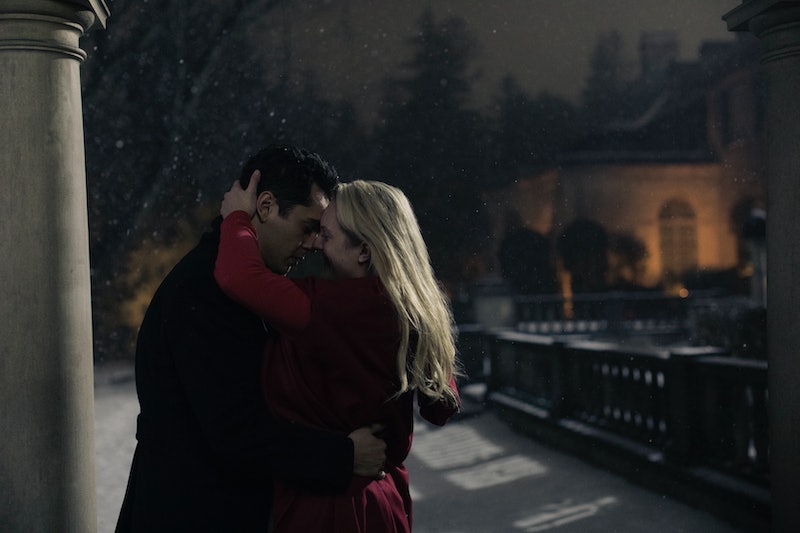 Spoilers ahead for The Handmaid's Tale Season 3 Episode 6. Nick Blaine isn't exactly who he says he is, but those who watched the first season of The Handmaid's Tale already knew that. Still, it's shocking to watch June finally discover that Nick's identity is all a lie, and has been this whole time. While Max Minghella tells Bustle that Nick's lies serve a purpose, Elisabeth Moss says that purpose might be to help June realize the only person she can trust is herself. But will that be enough to save the women of Gilead?

Episode 6 is a pivotal one for June (Moss), who is taken to Washington D.C., now the capitol of Gilead, to help Commander Waterford and Serena try and bring back Nichole. Not only does she discover that the handmaids in the capitol have it far worse than she does, she realizes that Nick (Max Minghella), now a commander, hasn't been as honest with her as she thought. A realization that comes just one episode after June sends a message to Luke revealing her affair with Nick, a man, it turns out, she doesn't really know.

Nick isn't just a driver and an Eye with ties to the resistance, but someone who's "not to be trusted," according to the Swiss diplomat, who June was hoping Nick would give Gilead's secrets to in exchange for Nichole's safety. "I think things are just not what she thought they were," Moss tells Bustle at Hulu's press junket in New York City, "and these allies that she thought she had, she’s losing them."

It's not just Nick that June loses in D.C., Serena (Yvonne Strahovski) also chooses her husband over the rebellion. For June, Serena picking the patriarchy over her is a betrayal of the highest order. Perhaps that's why Serena seems to take pleasure in telling June that Nick served Gilead in the war, a sign he is really no different than Commander Waterford and June might not be so different than her. "We wouldn't be here without him," Serena says of Nick's role in Gilead's creation, which started with him joining the Sons of Jacob. "All this time you spent together and he never mentioned anything?"

"Serena breaks her heart," Moss says. "If there was anyone that June really believed in and would help her and be her ally it was Serena. That’s another catalyst, that’s another thing that’s propelling her forward to the place where she needs to go."

What June wants is to lead a successful rebellion, but after her trip to Washington she might be doing it with a one-woman army. "I think she realizes that she needs to go it alone, in the sense that nobody is going to be crazy enough to do what she has to do, except for her," Moss says, teasing that the lengths June will go to in the latter half of the season are "pretty extreme."

While June figures out where to go next and who to go with, Nick is headed to Chicago with an army that from the looks of all their saluting is willing to follow him anywhere. But who are they following? "He’s a self-preserver," Minghella says of Nick. "He’s somebody who’s constantly trying to be conscious of the political minefield. He has to be very savvy in a way that I am not in real life. He’s always one step ahead, always got something up his sleeve."

It's why it's hard to know where Nick's loyalties lie. Sure, he's the guy leading the Eyes on the front lines of Chicago, which Minghella says fans will get to see in upcoming episodes. But he's also the one warning June, "Get in bed with the government, it's not so easy to get out."

What Minghella says fans shouldn't question is Nick's feelings for June. "His love for her is very straightforward and uncomplicated," he says. "Everything else on the show is complicated, except for that narrative thread, which is emotional. In my mind, it’s never been about a manipulation."

This season, Minghella says, is about evolution. Each character has been tearing down the infrastructures of Gilead — both literally, in burning down the Waterford's house, and figuratively, these personal bonds they've built — to figure out what really matters in this dystopian world. It's why Minghella isn't convinced that June and Nick's relationship, one of the few good things in Gilead, is really over.

"I think everybody on the show is capable of good things and bad things, it’s a reflection of real life and all human beings and I’ve loved that about it," he says. "Everyone who’s living under this weird roof gets that terrible things have probably been done." Now, June will have to decide if she's willing to forgive the terrible things Nick's done or if she will lead this revolution without him.