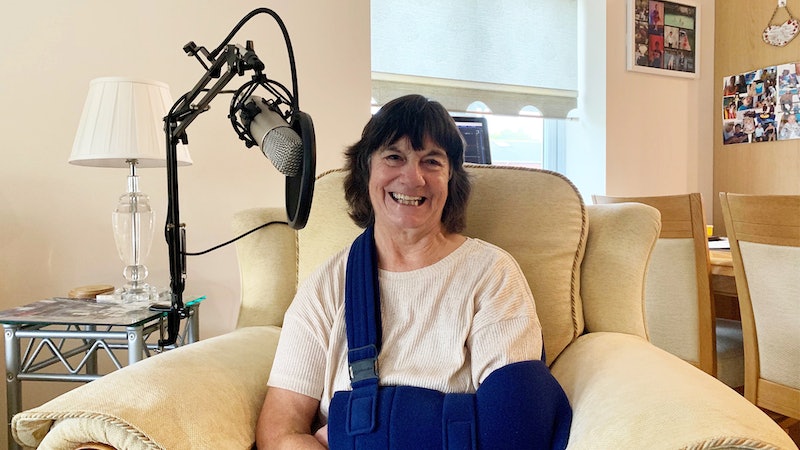 I've always been close to my nan. For the first four years of my life, I spent every single weekday getting under her feet. I blame her for my early fondness for tea. When teen years beckoned, arguments with parents would see me "running away" to nan's house. Now, we still make a point of speaking to or seeing each other at least once a week. Despite having such a strong bond, I still didn't know half the things that spilled from my nan's mouth when I recorded her life story.

By recording her life story, I don't mean me sitting on the sofa holding my phone aloft. I mean a proper, professional audio documentary courtesy of recordthem. Founded by Dave Creasey, the company aims to create an unforgettable piece of family history incorporating a loved one's memories, their favourite music, and archive audio.

Prior to Dave's arrival, my nan — despite having a broken arm — did what any good nan does: baked a cake. A born chatterbox, she seemed at ease; it was me that was worried she would clam up when recalling certain portions of her life. I knew her first child, a little girl born stillborn, was an immense source of pain rarely mentioned. But, from the get-go, Dave's reassurances encouraged her to dig gloriously deep into her 74 years on this planet. (Plus, she said afterwards, she got to feel like a celebrity behind the microphone.)

Nan's recollection started at the very beginning. Her memories of growing up in post-war London were undeniably the most emotional. She divulged how her mum's early life had an eerily similar feel to her own. Her mother's mother had left her family behind (a detail I was unaware of), leaving my great-nan to care for her siblings. At a young age, my nan, too, became the carer of four children when her mum fell ill.

By the time she was 15, she had left school; her dreams of being a nurse shattered after her dad said she needed to make money. Once a week, her retail job required her to attend night school to learn how to speak to people "properly". (The South London accent never disappeared.)

A first date with the man who would eventually become my grandad turned out to be the moment she'd never forget. He was left waiting down the road after her dad dictated she wasn't allowed to go out with boys until she was 25. Shouting, tears, and a plea from her brother, and her dad relented.

Although she described her wedding day as the best day of her life, it was completely unplanned. My nan fell pregnant and, for moral reasons, had to get married before giving birth. "I was the bloody scarlet woman," she laughed. (Her favourite word, she later admitted, is "bloody".)

Humour quickly turned to grief. The first of the three moments in which she visibly welled up was a moment almost painful to hear. But I wasn't expecting to feel anger. The day her daughter was born stillborn — the "worst day of [her] life" — a doctor bundled a group of students around my nan's hospital bed, loudly stating: "She doesn't make very good babies."

The next upsetting recollection was also surprising. My nan's uncle died at the age of 24 after falling from scaffolding; I was aware of that. But I didn't realise quite how much his death affected her, or how she'd experienced this grief all over again when a family member recently revealed their belief that her uncle might have gotten on the wrong side of the infamous Kray twins.

Another early death hit her, and my grandad, with force. "I still can't believe it," she said, recalling my grandad's father's suicide. "He wouldn't get out of bed one day and we didn't understand it. He was wringing wet with sweat, so he must have had depression ... but there was no one there to help him." "No one talked about [mental health]; no one understood it," she later explained.

Further hard times occurred when a ceiling collapse spelled the end of a stable place to live. "I would walk round the streets with my kids and I didn't know what was gonna happen next," she remembered. But things thankfully turned themselves around; noted by the change of tone in my nan's voice.

She spoke of each of her four daughters and six grandchildren with utter joy and, of course, a "bloody" peppering almost every sentence. It's her family she lives for, and always has done; a truly noble act. But she's also known for saying it like it is; something she describes as a strength.

"You've got to be a strong person in this world," she said, following up with the importance of happiness: "If you're not happy, you've got to get out of that situation."

By the time the session was up, my emotion reserve had run dry. I'd laughed; I'd teared up; I'd been frustrated, gut-punched, and, most of all, completely in awe. In awe at how one woman kept on going when life became tough to swallow. In awe at how, decades later, she's still the selfless carer — no longer just for young children, but for people spanning generations and identities. The elderly people living nearby; the other patients in the hospital she recently spent a week sleeping alongside; the random people she meets going along to literary conventions with her eldest granddaughter.

In 2020, she and my grandad are planning to move to Australia. I will be devastated, but I now have 60 minutes of her hopes, struggles, and, yes, moans to listen to on tap. And so will the rest of my family when I present them with the recording at Christmas.

Nan says we make her want to live forever. Thanks to this experience, she'll never be forgotten.

A recordthem interview, including the final audio documentary presented on a CD and memory stick, costs £899.

More like this
Here’s What TikTok's "Mascara” Trend Is *Really* About
By El Hunt
Pret & Costa’s Coffee Is The Strongest On The High Street, According To Which?
By Sam Ramsden
This Girls Aloud x Sugababes Collab Still Hits All The Right Notes
By Sophie McEvoy
The Spice Girls Are Set To Reunite At King Charles III’s Coronation
By Sam Ramsden
Get The Very Best Of Bustle/UK
Sign up for Bustle UK's twice-weekly newsletter, featuring the latest must-watch TV, moving personal stories, and expert advice on the hottest viral buys.