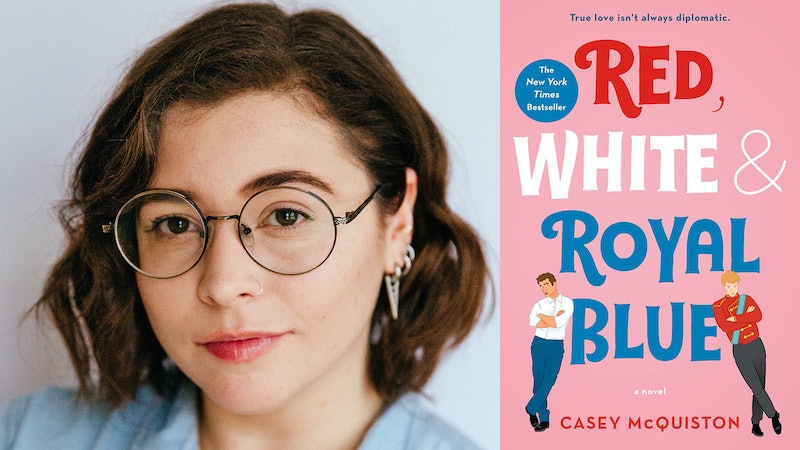 The debate over how much information authors should share about their books after publication is nothing new. Turtles All The Way Down author John Green won't offer up his own theories about his characters beyond what he put on the page, but Harry Potter author J.K. Rowling can't seem to stop. Casey McQuiston, author of one of summer's hottest books Red, White & Royal Blue, has her own ideas about what to share after the fact — and that's why, in the past few weeks, she has used social media to drop certain "character details" about her beloved protagonists, including their Hogwarts houses, their Zodiac signs, and, in an exclusive interview with Bustle, which books they're reading this summer.

"I don’t think any reader is obligated to take a single word that’s not literally printed on the page as canon," Casey McQuiston tells Bustle. "But, I’ve been a fan of things for so much longer than I’ve been a writer of things, and I know what I would have wanted if I were a fan of this book. When you fall in love with characters and then the story ends, you’re always so hungry to know more about them."

McQuiston's royal rom-com Red, White & Royal Blue is undeniably one of the biggest — and most beloved — books of 2019 thus far. It boasts a 4.49-star rating Goodreads, and the The New York Times called it a "brilliant, wonderful book." The plot is made for summer reading: It's a queer romance novel that follows two sworn enemies, First Son of the United States, Alex Claremont-Diaz, and Prince Henry of Wales. After the two accidentally ruin a royal wedding, they are forced by their respective families to make amends — publicly, and for tabloid consumption. As you might imagine, their "fake friendship" quickly turns into a real romance. Best of all, it all takes place in an alternate timeline where a woman is president instead of Donald Trump. It's a frothy, fun story wrapped in a bubblegum pink package, and there's a good chance you've already seen a picture of it on your social media feeds.

Although McQuiston says she's not a "particularly polished or reverent social media user," she has used her platform to give the fans what they want, namely the Hogwarts houses of her characters, and birth charts for the four main characters: Alex, Henry, Alex's sister, June, and his best friend, Nora. (Alex, June, and Nora call themselves The White House Trio.)

"I had three things that I set up at the earliest stage of character sketching: zodiac sign, MBTI [Myers–Briggs Type Indicator], and Hogwarts house. That was the jumping off point for every character, and then backstory and further characterization would fill in the blanks," McQuiston says. "I was creating charts throughout the development and drafting process, because they were helpful, but also because I have ADHD and when I get into hyperfixation mode, my brain wants to create as much supplementary material for myself as I possibly can."

"For example, I knew Alex was an Aries sun from jump, but once I spent more time with him, I also knew he was a full-on triple fire nightmare."

McQuiston says that she has long been interested in astrology and that "it's always been a character shorthand for me as a writer." But the process of creating a chart for each character — determining their birth times and places to align with the sun sign, moon sign, and ascendant sign — shows a commitment to world-building that shines through in the narrative.

"For example, I knew Alex was an Aries sun from jump, but once I spent more time with him, I also knew he was a full-on triple fire nightmare, so I gave him that Aries moon and Leo rising," McQuiston says. "And when I was figuring out his birth date and time, I wanted the numbers to have some significance, so I kept playing with the settings in my Co--Star app until I had assigned him March 27, 1998 at 2:07 p.m., a double reference to the 270 electoral votes it takes to win a presidential election."

"I think for a lot of us, astrology provides some kind of order and a framework to make sense of ourselves and our relationships and the things that happen in our lives."

Sharing these charts with her readers on Twitter has been a unique way to bring fans closer to the characters they love — thanks in large part to the fact that many of McQuiston's fans are just as devoted to astrology as the author.

"I think the rise of astrology is directly proportional to the rise of young people with depression and anxiety, honestly — and I say that sincerely as a young person with depression and anxiety," McQuiston says. "We’re all out here joking our way through existential dread and trying to figure out who we are, and I think for a lot of us, astrology provides some kind of order and a framework to make sense of ourselves and our relationships and the things that happen in our lives. I’m just excited that readers are as into these charts as I am!"

McQuiston has answers for almost every personality-based question you could ask of her characters — Enneagram type? "Alex is an 8w7, Henry is a 2w1, June is a 9w8, and Nora is a 6w5!" — but she is careful to share only information that enhances the book. She doesn't want to speculate too much about what happens off-page.

I couldn't help but ask one more question about her characters: What are Henry and The White House Trio reading this summer?

"I think this summer Henry is reading something beautiful and literary, so On Earth We're Briefly Gorgeous by Ocean Vuong. Alex is reading Lot by Bryan Washington. If it’s summer 2019, he’s not yet fully aware just why this book about coming of age as a queer, biracial young man in Texas has him quite so emotionally wrung out," McQuiston says. "Nora has abused her position of fame and influence to get her hands on an ARC [Advance Reader Copy] of Gideon the Ninth by Tamsyn Muir, and June, ever the romantic, is currently devouring Evvie Drake Starts Over by Linda Holmes."