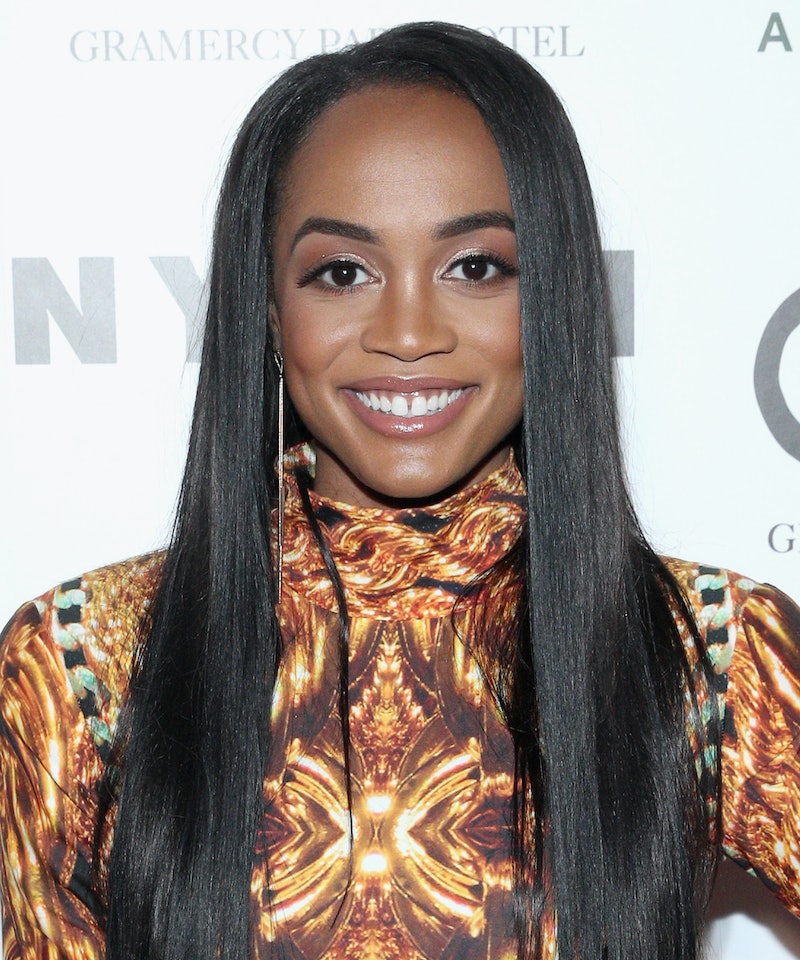 This season of The Bachelor certainly has a ton of people buzzing about each episode, and as the finale comes closer and closer, the question of "Who will Arie pick?" becomes even more heated. Fans may be divided over which woman to root for, but Bachelor Nation alum Rachel Lindsay is not only supportive of one contestant to win — she actually wants that person, Seinne, to be the next Bachelorette.

"I am rooting for for someone in particular," says Lindsay, speaking at the Go Red For Women Red Dress Collection Fashion Show on Feb. 8 in New York. "I think Seinne is absolutely amazing. So I'm rooting for her. If not to win, then to be the next Bachelorette."

As it turns out, Lindsay has been a fan of Seinne Fleming for a while. In her Bachelor blog for Us Weekly, Lindsay noted that after watching week four of the show, she saw that Arie and Seinne seemed to get along well on a one-on-one date where the duo went parasailing. "It is delightful to see Arie and Seinne have a pleasant conversation without interruption and too much kissing," wrote Lindsay on the blog. "Seinne is asking all the right questions and I appreciate that … and I think Arie does as well."

Lindsay has also tweeted that Seinne is "classy" and that as a fellow black women, she understands the contestant's particular frustrations about finding love. During her one-on-one date with Arie, Seinne expressed that women of color like her don't get the "fairytale ending," something that Lindsay has said she unfortunately connects with.

"Pop culture does not frequently depict women of color realizing their happy ending," she wrote for Us Weekly. "Seinne, I understand you on another level and I have a message for you." Lindsay went on to reassure Seinne that true love can happen.

But will that kind of romance happen this Bachelor season? It's unknown, but like Lindsay suggests, going on to be the lead of her own season of The Bachelorette may be the best option for Seinne when it comes to finding love. She's a big fave with fans right now, and seeing her lead her search for relationship happiness in Season 14 of the female-led show could be truly great.

Some fans' argument for Sienne being the next Bachelorette is that she's too good for Arie, something echoed by the runner-up of last season of The Bachelor, Raven Gates. In a column written for Bustle, Raven said, "By the way, what the hell is Seinne doing on this show? She’s too good for this, SMH."

Well, whatever happens with Seinne on The Bachelor, it's clear that Lindsay is really just loving being able to watch as a fan, and not as an involved contestant or front-runner. She's met Arie and thinks he's a good guy, and that alone has her invested in his season of the series. "Everyone knows I didn't watch the show before," Lindsay tells Bustle at the fashion show. "So I'm like, 'I don't want any spoilers!' I just wanna watch you on your journey and to get what it is you deserve."

As both a former Bachelor contestant and the 2017 Bachelorette, Lindsay has the inside scoop on what both Arie and Sienne are experiencing on the show. Hopefully both individuals will end up as happy as she did; as fans know, Lindsay ended up finding love with Bryan Abasolo, and at the fashion show, her fiancé sweetly gave her a rose. Aww. Clearly, happy endings in Bachelor Nation are totally possible, and Lindsay is walking proof.