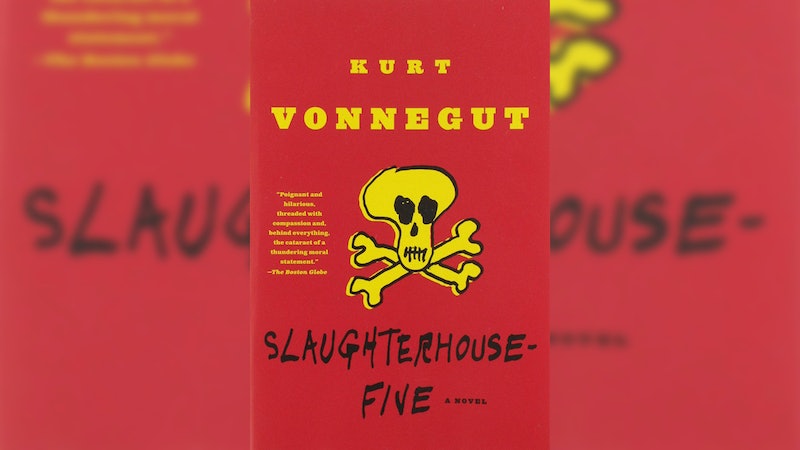 It is no secret I have — er — concerns about what students are required to read in school these days. In the past, I've lamented sexist summer reading books, criticized misogynistic classics, and even suggested schools should — gasp! — have students read more novels by women, particularly women of color. But if there is one book I think deserves its spot on the required reading list, even 50 years after its publication and over a decade after it's (white male) author's death, it's Kurt Vonnegut's Slaughterhouse-Five. A groundbreaking anti-war novel about truth, disillusionment, free will, mortality, and morality, it's a modern classic every high school student — really, every person — should read.

First published in 1969, Slaughterhouse-Five, or the Children's Crusade: A Duty-Dance with Death was Kurt Vonnegut's sixth and arguably most famous novel. It's non-linear narrative tells the story of Billy Pilgrim, a soldier in the United States Army during World War II who is captured by the Germans and held prisoner at a forced labor camp in Dresden. After riding out the devastating 1945 bombing by the Allies in a cellar and becoming one of its few survivors, Billy receives an honorable discharge from duty and returns to the U.S. to live out his life in peace.

There are just a few things that get in the way. First, he finds himself in a psychiatric hospital for treatment of post-traumatic stress disorder symptoms. After his supposed recovery, her marries and has children. But then, on the night of his daughter's wedding, he is abducted by aliens and put on display at the Tralfamadorian zoo. Billy makes the best of things, and when a famous actress becomes his exhibit mate, they fall in love and have a child. It's a shame, then, that Billy is sent back to Earth, where be becomes "unstuck in time" and forced to relive his past, present, and future.

According to Vonnegut, it took him over 20 years to write Slaughterhouse-Five, a novel that attempts to explain what the author himself experienced as a prisoner of war and a witness to the destruction at Dresden. "I would hate to tell you what this lousy little book cost me in money and anxiety and time," he writes in the book's first, autobiographical chapter. "When I got home from the Second World War twenty-three years ago, I thought it would be easy for me to write about the destruction of Dresden, since all I would have to do would be to report what I had seen. And I thought, too, that it would be a masterpiece or at least make me a lot of money, since the subject was so big."

A genre-bending novel that combines elements of historical fiction, memoir, satire, and science fiction, Slaughterhouse-Five is a brilliant work of literature — the masterpiece the author hoped it would be.

Unlike the textbooks in most high school history classes, Slaughterhouse-Five doesn't leave out the ugly parts of America's past, or for that matter, the world's. Rather, Vonnegut's novel shines a spotlight on the misdeeds, wrongdoing, and outright villainy — national and international alike — that shaped the twentieth century, and asks the tough questions: how they happened, why they happened, and whether or not any of it was worth it. The firebombing of Dresden during World War II is the book's main target, but it's punches land firmly on the Vietnam War, the violent opposition to the civil rights movement, income inequality, and armed conflict as a whole.

“There are almost no characters in this story, and almost no dramatic confrontations, because most of the people in it are so sick and so much the listless playthings of enormous forces," the narrator of Slaughterhouse-Five explains. "One of the main effects of war, after all, is that people are discouraged from being characters.” Vonnegut's story isn't only concerned with history itself, but the burden history's witnesses have in carrying it with them, and passing it onto others.

In that way, Slaughterhouse-Five manages to take a history lesson and transform it into a thoughtful examination of mental health and the effects of post-traumatic stress disorder in particular. Billy, the protagonist, openly struggles with symptoms throughout the novel, but it is the book's narrative structure itself that offers real insight into the mind of someone struggling with PTSD. Through flashbacks and flashforwards, the readers get a glimpse of what it is like to re-experience trauma, even years after it happened.

One of the most frequently challenged novels of the twentieth century, Slaughterhouse-Five is a modern classic and a cornerstone of the high school required reading list. For fifty years, it has taught generations of readers to investigate history, challenge the norm, speak up for their beliefs, and speak out against wrongdoing, no matter how high up the latter it goes. Here's to hoping that, like its main character, Slaughterhouse-Five remains "unstuck in time" forever.