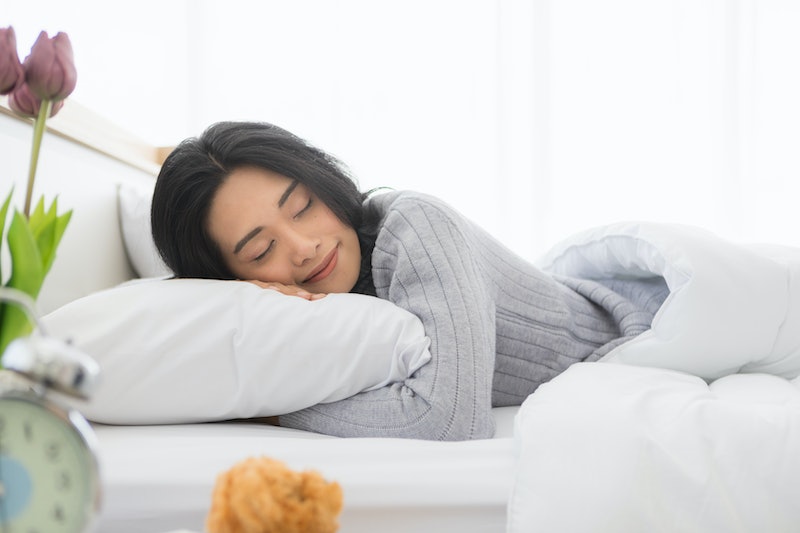 If you’re anything like me, then sleeping less than seven or eight hours can lead to minor existential crisis the next day. Not getting enough rest can make you mentally foggy, and may leave you feeling moody, cranky, and just off overall. Unlike me, however, some people can function really, really well with very little sleep — and science shows this gift may be genetic. According to a new study published in Science Translational Medicine, there’s a gene that makes some people need barely any sleep at night. Apparently, some folks can actually feel happy, alert, and productive with just a few hours of sleep at night. They can also walk into the next room and remember why they’re there. Sign me up.

While researchers say that adequate sleep is crucial for staying healthy, people can have different needs in terms of how much they require. University of California at San Francisco researchers Ying-Hui Fu and Louis Ptáček first discovered a short sleeping gene in 2009, WIRED reports. Since then, the study’s authors say they’ve heard from a crush of people saying that they only need a few hours of sleep at night. When one man and his son told Fu that they feel amazing — with ample energy and great memory recall — on a daily basis with less than five hours of sleep, she and Ptáček enrolled them in a new study and identified a new short sleeping gene mutation via blood tests. This is the third short sleeping gene discovered so far, says WIRED, but researchers think that there may be more.

“These people sleep more efficiently,” Fu told Scientific American about why some people need less sleep. “Whatever function sleep is doing for us, it takes us eight [hours to feel rested], but it takes them six or four hours. If we can figure out why they are more efficient, we can use that knowledge to help everybody to be more efficient.” Short sleepers also tend to be more optimistic and love to be productive, she said. “They like to keep busy. They don’t sit around wasting time.”

Sleep deprivation typically means that you might have a harder time focusing or remembering things the next day. While some people may think that they’re doing OK with inadequate shut eye, that’s most often not the case, Fu said in Scientific American. “Your perception is skewed, so you don’t really know your performance is not as good,” she told the magazine. “That’s why people think [adequate sleep] doesn’t matter. But actually, it does. If you test them, it’s obvious.” However, genetic short sleepers don’t end up dealing with the negative effects of less sleep, she said — they genuinely thrive on fewer hours of rest.

It might be helpful to note that trying to be a short sleeper by sleeping less doesn’t mean that you are one. In fact, you might be skating by on too little sleep. Scientific American notes that if you need to sleep in on the weekends, you’re probably not getting enough rest during the week. WIRED said that true short sleepers are rare, as only one in 4 million people have the mutation.

So, if you find that you’re not deeply energized after sleeping for only a handful of hours each night, the genetic lottery didn’t go your way (or mine) in this particular instance. Most people need at least seven to nine hours of sleep every night, Harvard Health says, so try to get more sleep if you need to.

More like this
How Ovulation Affects Your Sense Of Smell, Libido, & More
By JR Thorpe and Lexi Inks
The 11 Benefits Of Aerial Yoga, According To Trainers
By Carolyn Steber
Here’s What Health Means To People In 2023
By Isabella Biedenharn
All The Reasons Your Gums Bleed When Brushing Your Teeth
By Carolyn Steber
Get Even More From Bustle — Sign Up For The Newsletter
From hair trends to relationship advice, our daily newsletter has everything you need to sound like a person who’s on TikTok, even if you aren’t.