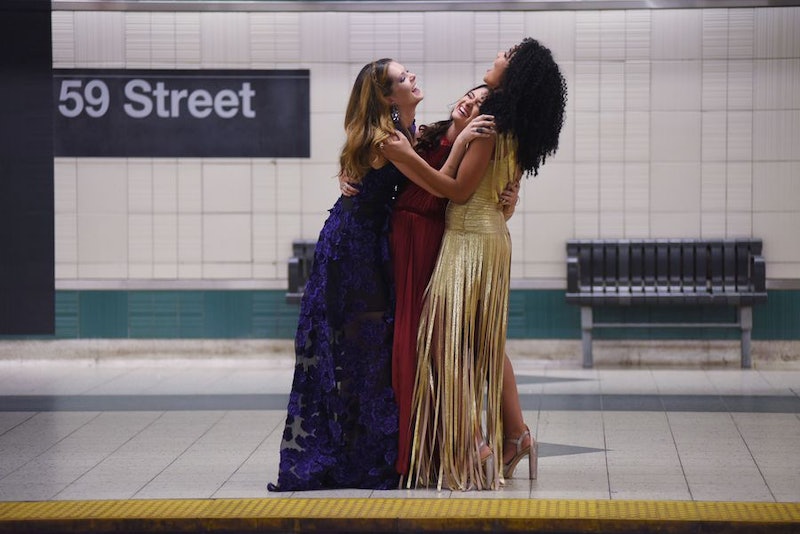 In 2017, feminists are everywhere. Women took to the streets in droves for the Women's March to loudly, angrily protest. We are in your face demanding equal rights. We are talking about politics at the dinner table; we are ending friendships with people who didn't share our values; we are making our voices heard. Then came The Bold Type, a supposed "love letter to modern feminism," according to Karey Burke, the executive vice president of programming and development at Freeform. But the show fails to deliver on that promise. If anything, The Bold Type's version of feminism is actually dangerous.

The show delivers its feminism in a brightly-colored package tied up in a bow, and it lets you decide whether or not you want to open that package. If you don't, you get a fun Gossip Girl-style show about high stakes drama, fashion, and romance in a fast-paced workplace. If you do choose open the box, out falls "persist" memes Snapchatted between friends and Muslim women in burqas who are also Beyoncé fans as if being a part of the Beyhive is all you need to make you an interesting, feminist woman. The show even goes so far as to label what the characters do at Scarlet magazine "stealth feminism."

This version feminism extended throughout the show and also into a panel with the cast following the show's recent New York premiere, which Bustle attended. Dan Bucatinsky, the panel's moderator, praised the show because it, in "a subversive way, tells a feminist story of how women in power don't have to take down other women to be empowered or get more power." When he said this, the panel members clapped enthusiastically. Sure, what Bucatinsky said is objectively a good thing. Women don't have to tear each other down, and I would argue many of them don't. Competition between women is more of a myth than a reality in mine and many other women's experiences. It's great that the show is putting an emphasis on featuring supportive working women. But there's no need to be sneaky about that. Feminist women or ideas don't need to be presented in a "stealthy" way.

The fight for women's rights shouldn't be easily digestible.

Look, I respect Joanna Coles, whose career is the basis for the show. In 2012, when she took over Cosmopolitan, upon which Scarlet is based, she did transform it to give it a political edge. As reported by Politico, Coles said at the time, "I really want Cosmo as a magazine to be more involved in political issues ... We’re the biggest read magazine — literally — in the world and I think it’s very important that we stay on top of political issues that impact young women: Health care, gun violence, the wage gap, how do we close it. These are all issues that I’m personally passionate about.”

I was an intern at the magazine in 2013, shortly after she took over, and it was fascinating to work on pieces that took these issues seriously. I helped on articles covering birth control access, domestic violence rates, gun control, and revenge porn. I think when Coles took over Cosmo, she was right to do it with "stealth feminism." She was slowly transforming the magazine into a totally feminist publication. But that was also five years ago. Today we live in a world where politics is present in everything. The 2016 election results forced women to fully engage in their society and demand equality because it's clearly never going to be fairly doled out otherwise.

Women can't afford to hide their desire for equality. We aren't parents trying to get children to eat broccoli by smothering it in cheese. The fight for women's rights shouldn't be easily digestible. But that spoon full of sugar is seemingly what The Bold Type is advocating for with its characters praising the editor-in-chief's "stealth feminism" methods of transforming the magazine from being about how to please your partner to how to please yourself. And, yes, a woman seeking her own pleasure is part of what feminism is, but it's certainly far from all of it. Especially when this type of feminist stance is sandwiched between all the best drama markers of post-Gossip Girl television series.

One young woman is sleeping with the magazine's board member. Another gets drunk and stumbles into the office in the middle of the night, laying across desks as she makes a phone call to her friends to discuss boys. Another character disrespects what her bosses tell her to do and goes behind their backs to land an interview. It works out for her, but only just.

I wouldn't go as far as to call The Bold Type fake feminism, but it's certainly surface level feminism — and in that way, it's talking down to its audience. Young women are completely capable of bold, in-your-face activism. There's nothing "stealthy" about how teenage activists like Amandla Stenberg or Malala Yousafzai approach their feminism. In fact, it's precisely speaking up and standing strong that has made Yousafzai such an icon for women to look to.

It may have surprised an older generation when Teen Vogue began producing smart political content, but it didn't surprise their audience. As Mother Jones put it in the headline of their interview with Teen Vogue writer Lauren Duca "Stop Being Shocked That Teen Girls Give a Sh*t About Politics." They may not be able to vote until 18, but teens are paying attention to politics long before that, and they're staying engaged. Turnout at the Women's March in Washington D.C. and across the nation included many young and teen women, rallying to have their voices heard. Young women are not only capable of handling full-blown, in-your-face feminism, but they're demanding it. As Teen Vogue editor Elaine Welteroth told The Guardian, "I think the readers that we reach would all consider themselves activists," so the magazine is respecting that by giving them the hard-hitting news they crave. Teen Vogue (among others) is taking teens seriously, which can't necessarily be said for this new series. (Freeform declined to comment on the show's portrayal of feminism.)

Still, The Bold Type is a good show. It's fun, dramatic, and worthy of those CW drama comparisons. It also has some cool feminist moments. (One of the young female protagonists standing up to her love interest and demanding the relationship she wants was nice to see... if you ignore the fact that he's still a man in a position of power dating an assistant at the company he runs.) Of course, you can be a feminist and like memes and Beyoncé and shoes and clothes. But The Bold Type is not a love letter to that version of modern feminism, because modern feminism isn't sneaky. It isn't subversive. It doesn't hide itself in glittery dresses and clacking stilettos to make itself more acceptable.

It's possible that coming episodes will get braver, but for now all The Bold Type premiere has left me with is the wish that it had been a little more bold.

More like this
Adele’s All-Female Lineup Includes Kacey Musgraves, Mahalia, & Self Esteem
By Shahed Ezaydi
Vecna Officially Has A Fan In 'Stranger Things' Star Jamie Campbell Bower
By Alyssa Lapid
Adele Says Postponing Her Las Vegas Residency Was “Brutal”
By Alyssa Lapid
Kimberly J. Brown & Daniel Kountz Looked Back On Their ‘Halloweentown’ Romance
By Stephanie Topacio Long
Get Even More From Bustle — Sign Up For The Newsletter