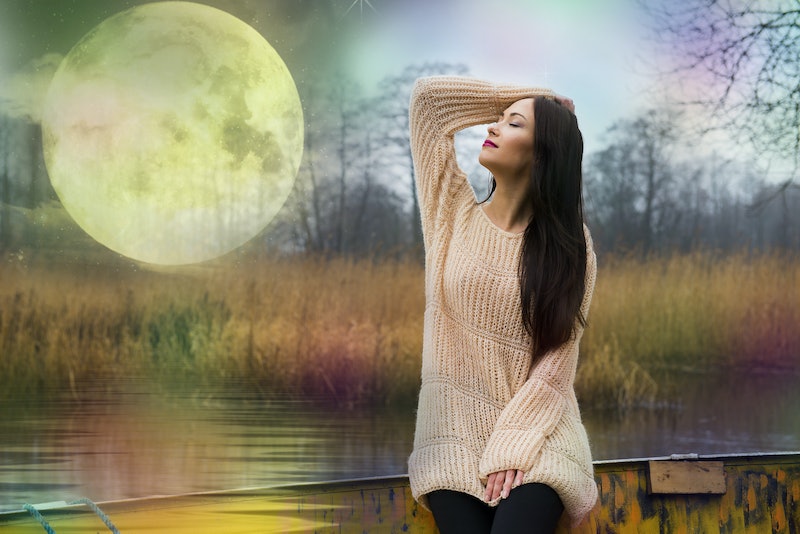 The weather outside is frightful, but full moons are so delightful! That's why we're all looking forward to December's lovely luminary, which peaks in the skies at 9:12 p.m. PT on Dec. 11 and is also known as the Cold Moon. You may have heard this lunar nickname before, and if you're wondering why the December 2019 full moon is called the Cold Moon, I can confirm that yes, it is partially because of the fact that it takes place while it's this freaking cold outside. But there's lots more to how the Cold Moon got its name, too, so let's dissect.

"During this month the winter cold fastens its grip, and nights are at their longest and darkest," the Farmer's Almanac explains. And the Cold Moon isn't the only well-known moon title you might recognize. Some others include the Harvest Moons of September or October, the Pink Moon of April (any Nick Drake fans in here?), and most adorably, IMO, the oh-so-summery Strawberry Moon, which takes place in June.

This luminary in particular is also reportedly known as the Long Night's Moon, which makes total sense, considering the ratio of nighttime to daylight is highest as we approach the winter solstice on Dec. 21. "The term Long Night’s Moon is a doubly appropriate name because the midwinter night is indeed long, and because the Moon is above the horizon for a long time," the Farmer's Almanac continues on its site. "The midwinter full Moon has a high trajectory across the sky because it is opposite a low Sun." 'Tis true: it's really cold and the nights are long when this moon rises, so it's certainly aptly titled.

The astrology of the Cold Moon in December is interesting to note as well. Full moons are generally a time of illumination (literally and metaphorically!), higher energy, and outward focus. When it comes to setting goals or intentions, it's always helpful to focus on release during a full moon, since they will begin waning (or getting smaller) over the final two weeks of the lunar cycle, making the energy well-suited for shedding and letting go of things.

This Cold Moon is also a full moon in Gemini, which is a mutable air sign and can sometimes make us spread our attention span thin and try to focus on a million things at once. This can be a little disorienting, but if we can ground ourselves, it's possible to use that frenetic energy to your advantage. "The Gemini Full Moon late on Wednesday, Dec. 11, light up the darkness with unconscious energy for completing routine tasks and making final decisions about matters that concern siblings, roommates, or neighbors," astrologer Pam Ciampi writes in Llewellyn's 2019 Daily Planetary Guide. Keep warm under the Cold Moon by staying busy, tying up loose ends before the holidaze really hit, and wrapping up menial, lingering projects.

Grounding yourself will be important to counter the flighty energy that Gemini adds to this luminary. But you'll also want to note some of the planetary aspects that are influencing the December 2019 full moon specifically, as they also require us to keep a conscious focus on level-headedness. "A square from Neptune adds a touch of martyr/victim to the Full Moon," Ciampi continues, "and also a warning that if you get too far away from reality you could fall off the edge of the cliff." Brrr, it's cold out here under this Cold Moon, so keep your feet planted firmly in reality's ground and try not let yourself get carried away in the moon's illusive energy during this long, chilly night.